Deputy Minister of MHLW Gaku Hashimoto posts on official account a photo of “zoning situation within the cruise ship” which indicates that no necessary measures to prevent virus infection have not been taken and he scores a spectacular own goal!

image: Author:223keisinkaisokuhimejiyuki [CC BY-SA]
Deputy Minister of MHLW Gaku Hashimoto posts on official account a photo of “zoning situation within the cruise ship” which indicates that no necessary measures to prevent virus infection have not been taken and he scores a spectacular own goal!
Is this ‘manzai’ or back chat? It is not so much demonstration of one shot joke ‘being not foolish but insane’ on the political level but as a farcical play itself.

Professor Kentaro Iwata pointed out in the video posted on YouTube, which has already been removed, that “the safety area and the dangerous area of Diamond Princess cruise ship have been messed up” and necessary measures to prevent the infectious disease have not been taken. Deputy Minister Gaku Hashimoto of MHLW, field supervisor, posted a photo showing the “zoning situation within the cruise ship” on official account. This helped him score a spectacular own goal.

It is too laughable and some people praise him as “whistle-blower.” The first tweet by Mr. Tatsuki Uchida shown below describes the current situation for which the expression of “chaos” is suitable.

In the photo posted by Deputy Minister Hashimoto, taking into consideration aerosol infection, the fact of “no space partitioning between safety green zone and  infection-threatening red zone is a problem, but according to Professor Iwata, the space in front of the photo is a more serious problem.

Please see the third to the last tweets, and you can understand it. This administration is really yabaior risky.

English translation of an excerpt from a Japanese article: BUZZAP!– February 20, 2020 by Fukami

[New Coronavirus] Deputy Minister Gaku Hashimoto of MHLW who released the zoning situation of the cruise ship himself has spectacularly detonated himself, which serves as whistle-blowing

<snip>
The image in problem is here. It is posted on official account by Deputy Minister Gaku Hashimoto of HMLC (Snapshot). 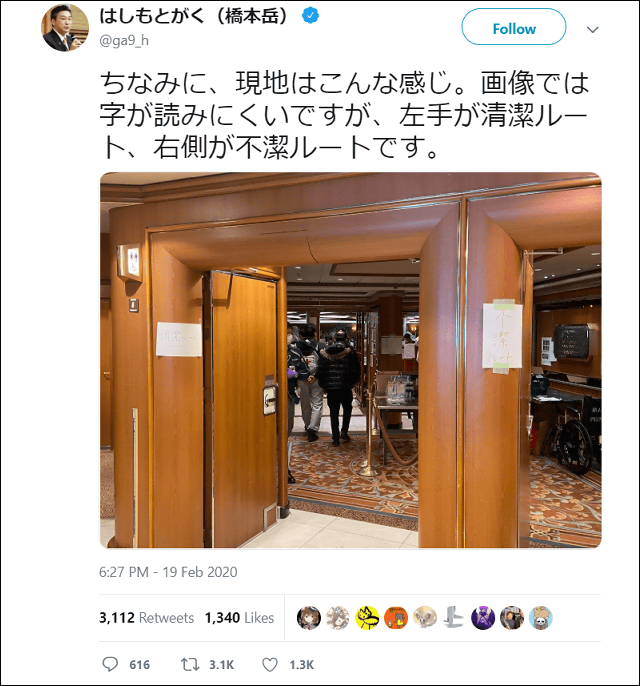 HashimotoGaku @ga9_h
"Incidentally, the actual place is like this. It is difficult to read written words in the image.
The left-hand is clean route and the right-hand unclean route." 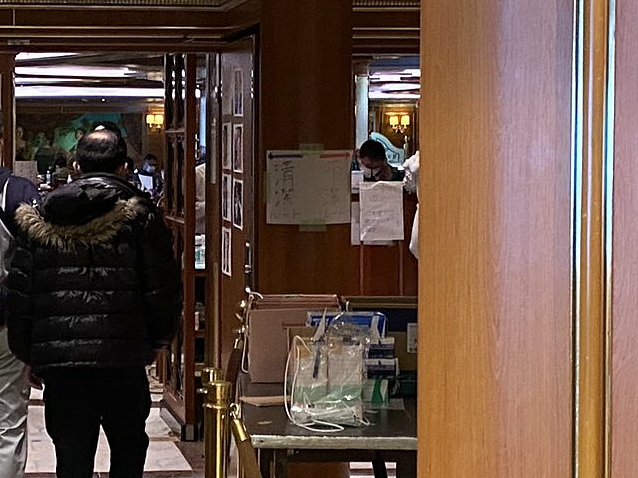 <snip>
Dr. Iwata’s accusation video which is greatly shocking in content and provoked a fierce backlash. He was criticized by some people saying “What can an outsider who spent just two hours on the ship figure out in the world?”

Under the circumstances, Deputy Minister Gaku Hashimoto who supervised at the site as “leader of MHLW” released a photo which can make anyone understand in a second that zoning within the cruise ship has not been implemented. In terms of this, he has received a lot of praise as a “whistle-blower.”
<The rest is omitted>

Tatsuru Uchida
@levinassien
It is the leader of MHLW on the site who happily showed off this photo as a “successful example of zoning” but hastily deleted it after an expert said “if you put out such a thing, it would deal a fatal blow.” I think that this eloquently speaks about the quality of countermeasures against viral infection at the site. It is natural that Professor Iwata described it as “chaos.”

Norita-kun
@PhoWves33
(Conclusion) Prof. Iwata was right.
I’m aghast at extremely low-level quality as a leader.
I wonder what he wanted to show by releasing this.

1. Countermeasures against infection diseases in Japan are in chaos.
2. Deputy Minister is helplessly incompetent.

And yet, the above has been proved today.

Kentaro Iwata
@georgebest1969
Can you see that this side of (place taken in a picture) is the zone where clean and unclean zones completely mingle.

Kentaro Iwata
@georgebest1969
Oh, it has been deleted. I’m glad that Hashimoto shared the zoning issue.

Kentaro Iwata
@georgebest1969
Incidentally, I don’ bring my smartphone on the cruise ship.
Because it is fundamental not to bring a mobile phone into the red zone
(We will be at high risk of infection if we do so.) So I had no photos.

tweet meme Yujin Tokio
@EugeneTokio
Additional information from official website of the cruise ship
It’s the photo seen from the opposite side. The #unclean route and the clean passage appear to get crossed in this way.
All people mingled on the other side of the pillar.
The problem lies here.

Somutamu
@mz6sc54
There are some strong people in a suit who walk behind a person wearing protecting clothing with a biohazard marked bag.

According to the MHLW, group infection with the new virus confirmed on the cruise ship “Diamond Princess”…

Panish
@georgebest1969
What do you think about this?
It’s a photo taken a few days ago.

We hear basic human rights will be eliminated by constitutional change
@rinn215
What is this cooking coat for in the first place?
It cannot serve as protecting closing.
Posted by Shanti Phula at 2:00 AM