The number of suicides in elementary school children and middle and high school students is statistically highest number of 332 – They tend to be affected by negative factors such as bullying, abuse and financial difficulty and tend to find it difficult to gain positive factors such as sense of self-affirmation, dream for the future and reliable human relationships

I think that negative factors are inevitable results of globalism and come from widening gap between the rich and the poor. I suppose that the decrease in positive factors is largely due to economic disparity which forces mothers to go to work to raise children. Children cannot gain positive factors unless mothers stay in close to them when they are young.

The reference also states that an increase in suicide is due largely to the influence of SNS and SNS functions to increase the “peer pressure” among pupils and students.

One theory holds that even adults become unhappy if they use Facebook: It seems that they will be obsessed with self-hatred by comparing themselves with others or get exhausted of pretending to “look themselves highly evaluated by others.”

There are too many concepts of values on SNS. There are few adults who have right concept of values. Therefore, I suppose that such confused information will have a tremendously influence on children.

Note:
Shanti-phula has indicated the following text in black bold-faced type or in red letters.

The investigation by the Ministry of Education, Culture, Sports, Science and Technology (MEXT) has revealed the results that the number of elementary school children and junior and senior high school students who committed suicide during the last year was 332 in total, the highest number since 1988.
<snip>
Every year the MEXT releases the number of children who committed suicide, which is reported by elementary schools, junior and senior high schools across the country. The results showed thatthe number of pupils and students who committed suicide during the last year was 332 in total which includes 193 boys and 139 girls: a 1.3-fold increase, 82 more children than during the previous year. The breakdown is as follows: five elementary children, 100 junior high school students and 227 high school students.   <snip>  This is the highest number of children’s suicides since 1988 when this statistics method was adopted.
<snip>
“Unknown” accounts for 60 % of causes of suicide
Causes of suicide include family problem for 41, rebuke by parents for 30, worries about entering further education for 28 and bullying for nine. The largest cause was Unknown. It accounted 60 percent of all causes, which applied to 194 children.

(２)
English translation of an excerpt from a Japanese article: Yahoo! JAPAN News– October 7, 2019 – Report by Shikou Ishii, editor-in-chief of “Futoko Shinbun”, a person with experience of *futoko

Highest level of suicide in early teens for the first time in the past 100 years
What are main reasons? 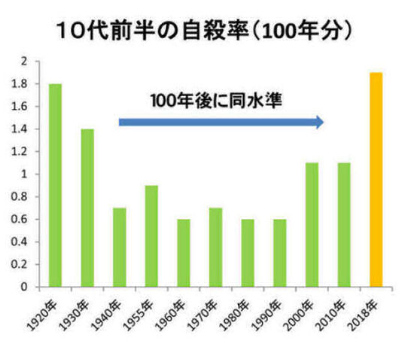 The results of vital statics have revealed that the rate of suicide in early teens was the highest in about 100 years.

According to the results, the suicide rate in early teens generally maintained the level of one per 100,000 people. However, it started to increase in around 2000 and according to the latest 2018 statistics (monthly year-long project / approximate number),the suicide rate in early teens was 1.9.It was higher than the level of 100 years ago. Incidentally, keep in mind that the rate did not stand out only in 2018 but according to the statistics in 2017, the rate was also 1.9.
<The rest is omitted>

The number of suicide by pupils has increased for the third year straight.
There is a background factor of “difficult situations in life.”
How do schools tackle with this problem?

The number of suicide by pupils has increased for the third year straight…
There is a background factor of “difficult situations in life.”
According to the survey of problematic behavior and futokou released by the Ministry of Ministry of Education, Culture, Sports, Science and Technology on 17, the number of elementary school children and junior and senior high school students who committed suicide has increased to 322, an increase for the third consecutive year.
mainici.jp
Posted by Shanti Phula at 2:34 AM