image: pixabay [CC0] & Author:Torsten_Bronger [CC BY-SA]
Heavenly Message by Mrs. Seiko Nakanishi 44 – Message from Takakiuchu-no-hikari-no- himemiko
I conveyed in the article dated January 23 that the mass meditation Cobra called for participation in was an evil plot which intends to destroy Earth and that Cobra’s Resistance Movement (RM) and the seven groups of Ancient Earth Break-away Civilization Mr. Corey Goode had contact with were also involved in the plot. Please read the article of January 23 first and then read the correspondence below.

Please see the table in the System of Heavenly World 10. Our solar system belongs to the First System Earthly Deity 5th Level(existing in 4th dimension) in the table. Both of Misakitakakunoboru-himemiko, who is the Central Sun of the Milky Way Galaxy, and the goddess, the Central Sun of the Universe, shown in the correspondence below, belong to the First System Stellar Deity 5th Level (existing in 184th dimension) shown in the table.

Each dimension is governed by the five deities of ki, tsu, wo, saand neand the deities described in Futomanifigure, respectively. With regard to governance system, please refer to the article dated December 16, 2014, in which I gave an explanation for it.

The former Central Sun of the Milky Way Galaxy appears in the vision you can see in the blog “From the Sea.”Please see it. With regard to the fact that she has already lost her soul, please see the Heavenly Message by Mrs. Seiko Nakanishi 22.

“Puppis” mentioned in the message is one of winter constellations. It is located near on the south horizon. 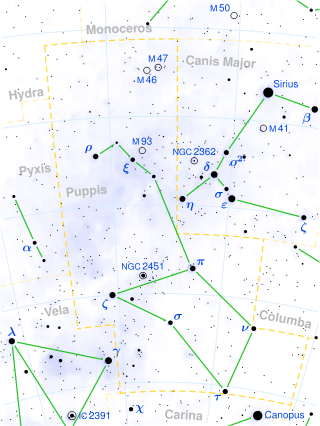 Hello, the goddess, the Central Sun of the Universe.
I think you have been sending light to Earth.
I’d like to ask you some questions about this.
Please answer my questions.

1.    Would you tell me your name?
: My name is "Takakiuchunohikari-no-himemiko."

3.    I think you have been reincarnated on ‘Pi Puppis’ which is called Ahadi on the earth. Am I right?
: Yes, you are exactly right.

5.    I think that the deity ‘u’ of the “three deities of a, u and wa’ in the First System Stellar Deity 5th Level is Misakitakakunoboru-himemiko, the “Central Sun of the Milky Way Galaxy”. Am I right?
: Yes, you are exactly right.

6. Is it right in thinking that you are the Central Sun of the Universe?
: Yes, exactly right.

7.    I think that the former “Central Sun of the Milky Way Galaxy” was executed and destroyed on February 5 at around 9:45 a.m. (JST). Am I right?
: Yes, everything you say is correct.

8.    I think that she was executed as a key culprit who tried to destroy earth environment by sending evil light to the earth in meditation of “Return of Light Activation” on January 21, 2019, which Cobra called for participation in, and causing a pole shift. Am I right?
: Yes, you are exactly right.

9.  I ordered to execute your predecessor “Central Sun of the Universe” in this case because although he was deprived of his post as the Central Sun of the Universe, he lied about his identity and tried to destroy Earth by sending negative light to Earth.
On the morning of February 6, he appeared in front of me and gave an excuse, saying “I was so stupid that I was deceived.” It seems to me that he disappeared after that. Am I right?
: Yes, you are exactly right.

10.  Because of this incident, all deities including former “five deities of ki,tsu,wo, sa and ne” in the First System Stellar Deity 5th Level and the “three deities of a, u and wa” have been executed, I think. Am I right?
: Regrettably, exactly right. That’s because all of them took part in the crime.

11．I think that you have been sending light to Earth since midnight on February 10 (JTS). I wonder until when this light continues to be sent.
: Until Earth becomes a safe place. I think that date and time will change depending on the condition of Earth.

12.  Since the light sent by the former “Central Sun of the Universe” after the“Return of Light Activation Meditation” on January 21 has been negative (light of Darkness) and Tamas(state of darkness), I think that Earth was supposed to cause a pole shift under the influence of light. However, since the light of the current goddess isSattva(state of purity), I think that the light raises human consciousness but a pole shift of earth will not happen. Am I right?
: You are exactly right. So please feel safe.

13.  I think that in this incident the conspiracy orchestrated by the former “Central Sun of the Universe” followed by the Blue Avians, the Pleiadian Fleet, the Ancient Earth Break-away Civilization and Cobra’s Resistance Movement (RM) has been completely smashed. Am I right?
: Yes, you are exactly right.
Their conspiracy has been completely destroyed and shattered as you gave an order.

14．Would you send a message to earthlings?

It’s a great pleasure for me to send a message to you at the request of Mr. Takeshita.

It brings great relief to all of us to have succeeded in defeating the conspiracy against Earth.

The destruction of Earth will never happen. However, the battle against evil will appear in various forms everywhere on the earth until the battle reaches its final stage.

Since skillfully concealed wrongdoings have been revealed, sometimes you might become pessimistic.
However, thanks to the light sent by the Central Sun of the Universe, evil has been exposed and the truth has come out. It is something to celebrate.

Light forces in the universe will never overlook the smallest evil.
At the same time, we pay attention to your small good deeds and good intentions.

Please have hope and do your best to keep your inner peace and patiently wait without despairing of the corruption of governments and organizations in this world.
As a help for you, pay attention to small joys in daily life as well as workings of nature and never finish off the day feeling depressed.
I do strongly hope that you will use “Gayatri Mantra” and “Mantra of Love” as food for your mind and heart and then walk with gratitude.

Please focus on your consciousness so that you can sufficiently receive light from me.
And pay attention to daily movements of your mind and feelings, and try to heal your heart with something more sublime and beautiful elements of the beautiful universe and nature.

Please don’t forget that we friends in the universe are always with you in love.

Brainwashing by deep Darkness is about to dissolve.
The networks of Darkness have begun to de dismantled one after another.

Awakening of each of you will create a chain reaction and lead to awakening of humans across the world.

Please listen calmly to your inner voice, keep away from false information provided by the world of Darkness and try to make out the voice of truth.

The earth covered with dark and long winter called Darkness is about to see the “spring of liberation.

Although Earth is covered with dark and long winter of Darkness, “spring of liberation” is just around the corner.

Let’s wait for the “spring on Earth liberated from Darkness” with hope, literally enjoying spring to your heart’s content.
Never give up.

Waiting for liberation of Earth together with you,
Takakiuchuno-hikarino-himemiko

The above is all of my questions, thank you.
Masatoshi Takeshita”