We live in the society composed of a leader and followers. However, who is happier is another matter. Since the criterion of happiness or unhappiness is completely subjective, people who judge themselves cannot be happy. The more they deny their existence, the unhappier they become while on the other hand, the more they accept themselves, the happier they become.

Although this expression might create some misunderstanding, a person who completely accepts himself has no self-image. This sate of consciousness is called “enlightenment.”

If you take happiness as the criterion for judgment, you will understand that gaining power, accumulating wealth or achieving social success has nothing to do with happiness, but rather pursuit of such things would get you into unhappiness.

While fully understanding the above, I often talk with my family as follows: “a person who is qualified as a leader is a person who can show concern for the most vulnerable people.” After reaching adulthood, people stop physical growth but continue spiritual growth. When people take care of others, it leads them to raise themselves in the sense of spiritual maturity.

In that sense, I think it is obvious who is the most suitable as the prime minister in Japan.

Kotobuki-cho, the town where cheap lodging houses for day workers blend into 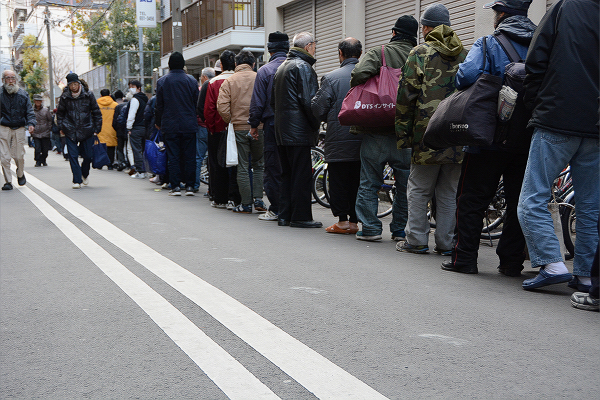 People waiting in line for more than one hour to get hot meals at a soup-kitchen
On December 31, 2018 at Kotobuki-cho, Yokohama City   Photo: Yukira Sagawa

Walking for nearly 10 minutes from Yokohama City Office past around 3 p.m. on December 31, I sawa 150-meter long line of people waiting to get free hot meals at a soup kitchen. In front of the line is Kotobuki Park, central part of Kotobuki-cho famous for its cheap lodging houses. People made a line to get food at a soup kitchen. On this day, 1,200 warm soba noodleswere prepared for street people shivering in the cold.
<snip>
People fall into poverty by the slightest thing. Some people have homes and others have no homes. They live next door to each other in Kotobuki-cho. It is just like the social structure of our time, in which the rich and the poor are inextricably linked together. At the back of a busy street, hundreds of people wrapped up in blankets are shivering with hunger and cold tonight, too.
(The rest is omitted)

Ryusaku Tanaka
When I was collecting information about homeless people who were struggling to make it through the winter at the end of the year, I saw a familiar face. He was Taro Yamamoto. He is an Upper House member standing for the weak who is rarely seen nowadays. He encouraged rough street sleepers, helping at a soup kitchen.
On December 31, 2018 at Kotobuki Park, Yokohama City Photo: Yukari Sagawa

Yukiko Miyake
Mr. Taro Yamamoto who made a speech said that he worried about the fact that he saw many young people and physically handicapped people at the soup kitchen. I told him that the Ministry of Health and Welfare had made a long-term investigation (until 2010) only about whether people have physical disability certificate or not.

Kazuya nakayama
Taro Yamamoto is desperately serving hot meals to extremely poor people who are going to die outside in the cold. No other politicians will do that. Taro Yamamoto is the right person as a prime minister in the future! What are Shinzo Abe and LDP/Japan Conference, swindlers in Mori-Kake scandal, doing?! This scam Japan Conference is more dangerous than a cult AUM Shinrikyo! They are a political cult extreme rightwing group that tries to take over Japan, destroy the Constitution and plunge us into war to kill off us all.

Nameless Investor
There are some people who know nothing. Ruling-party politicians lead the government to create the society. Therefore, the ruling party LxP is “responsible for the current situation in which we are forced to run a soup kitchen.”

Opposition-party politician Mr. Yamamoto is doing his best. The number of stupid Japanese who have no idea of the fact is increasing.

SisterJon
I think that people who say that “Taro Yamamoto is a good guy” for this performance are basically dumb.
Because the job as a politician is not “to work at a soup kitchen” but “to create the good situation in which no soup kitchen is needed.”
In a word, this is a play, leisure activity on a holiday. (Laughter)

Masahiro Nakano
If helping at a soup kitchen is publicity stunt, why don’t all Diet members do that?
Nobody stop it. We recommend it.
Posted by Shanti Phula at 3:11 AM