Late Mr. Takeshi Onaga leads Japan from spiritual world!! – When the Tamaki camp pushed forward the existence of late governor Onaga and Mrs. Mikiko Onaga came to the stage in the election rally, the tide turned in the Tamaki camp’s favor. –

image: Cabinet Public Relations Office [CC BY] & Author:Kugel~commonswiki [CC BY-SA]
Late Mr. Takeshi Onaga leads Japan from spiritual world!! – When the Tamaki camp pushed forward the existence of late governor Onaga and Mrs. Mikiko Onaga came to the stage in the election rally, the tide turned in the Tamaki camp’s favor. –
The photo of lunar halo seen in the first article is revealed by late Mr. Takeshi Onaga. Reading the second article by the Ryukyu Shimpo, we can see what a great influence Mr. Onaga had on the Okinawa gubernatorial election. Please read the whole text in the reference source.

On this blog I made a comment saying that Mr. Onaga will lead not only Okinawa but Japan from spiritual world and highly sensitive people can understand it. We have just seen the trend moving toward such direction.

Following the Okinawa gubernatorial election, the Editorial Board of the New York Times said: “The Japanese government and the American military should find a compromise in respect for the will of Okinawans.” I think that probably the trend will move toward a destination.

It appears that the sun has risen from the west (Okinawa) in Japan.

Lunar halo shines above the sky in main island of Okinawa

At night on 25 in main island of Okinawa, we sawa natural phenomenon of “lunar halo” of a large ring of light around the moon.

A lunar halo appears when light cloud covers around the moon. This phenomenon happens when moon light is reflected and refracted on the cloud made of ice crystals. There is a similar phenomenon of “solar halo” of a big ring around the sun.

September 25, which was the next day of harvest moon, fell on a full moon. Although stratus quickly passed away because of the typhoon, we were able to see with the naked eyes a big ring around the moon shining beautifully. 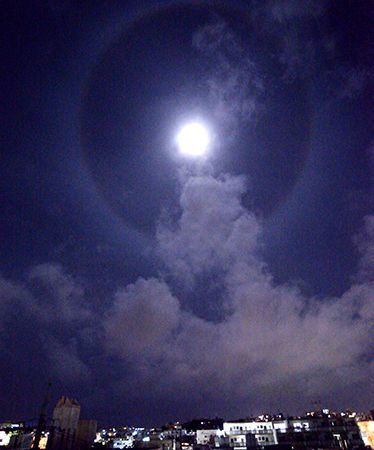 Lunar halo, a natural phenomenon of a light ring around the moon
At 11:25 pm on 25 in Gino City (Photograph: Jan Matsumoto)

Former governor Onaga showed a strong presence in Okinawa gubernatorial election and the appearance of Mrs. Mikiko Onaga led the tide into turning in the Tamaki camp’s favor.

When the election campaign reached a final phase,the information that Mr. Sakima, who is backed by the LDP/Komei coalition forces which boast of overwhelming campaign activities, has the leadin opinion polls, run rampant. The news shocked the Tamaki camp.

“We cannot fight without Mrs. Mikiko Onaga.”Tamaki camp manager changed the campaign operation to bring “Denny color” to the fore, and put focus on pushing forward the presence of late Governor Takeshi Onaga.

<snip>
Mrs. Mikiko Onaga came to the stage in the election rally on September 22. She roundly criticized the government which promotes to build a new base in Henoko with an iron fist.  <snip>  The Tamaki camp felt that the rally led the tide into turning in the camp’s favor.
<snip>
“We felt that we had two rivals,” said an executive of LDP Okinawa Federation, leaving the hotel where Mr. Makoto Saki gave a speech of defeat. He revealed how big the presence of deceased Mr. Onaga was.
<snip>
“You had better more strongly bring Onaga to the forefront of election campaign.” In the morning on September 19, the Tamaki camp …  translated the advice from a conservative supporter into action.  <snip>  They changed election posters on the bulletin boards designated by law into a pair of photos of late governor Onaga and Mr. Tamaki. They took down all old posters and replace them with new ones.
<snip>
The insight of Tamaki camp manager “hit the mark.”
(The rest is omitted)

Following the Okinawa gubernatorial election, the Editorial Board of the New York Times gave an opinion: It’s time for Washington and Tokyo to find a compromise.
The Japanese government and the American military should find a compromise in respect for the will of Okinawa people.
Toward a Smaller American Footprint on Okinawa: https://t.co/3WKypRVusn

Reporter Mochizuki:  “Former Governor Onaga raised a question about the U.S. military based in Okinawa: A new Henoko base is planned to be used for 200 years. Reinforcement and permanent use of the base would bring about more suffering to Okinawans. I wonder if construction of a new base will force Okinawan people to have a tremendous burden without reviewing the Japan-U.S. Status-of-Forces Agreement and deciding the relocation expiration date.”
*Ponkotus: “We will not build a new base.”
We heard you clearly, Suga!

He made a significant remark. As usual, he might say later: “Part of function of the Futemna base will be relocated. An integral part will be operated and it is not equivalent to a new base.”
Posted by Shanti Phula at 2:00 AM