The mainstream media have finally picked up a grand-scale sex abuse by the Catholic Church priests. – The Vatican is put into a corner and Pope Francis faces increasing pressure for resignation –

image: pixabay [CC0] & Author:Martin_Möller [CC BY-SA]
The mainstream media have finally picked up a grand-scale sex abuse by the Catholic Church priests. – The Vatican is put into a corner and Pope Francis faces increasing pressure for resignation –

I have followed up pedophilia crime and I have conveyed that sexual abuse has been carried out by Catholic priests on a grand scale. This is a part of Satanism conducted by the Vatican, that is, the overt Illuminati.

This kind of incident has been reported only by some alternative media and considered to be a conspiracy theory. However, the mainstream media have finally picked it up.

Therefore, it is clearly demonstrated that such crime has been organizationally committed. However, there seems to be no news coverage which gets further into the fact that the crime is committed by the Illuminati. At any rate, the Vatican is put into a corner and pressure to call for resignation of Pope Francis has increased.

My personal opinion is that it would be better for religions on earth not to exist because religion becomes a tool for exploitation. I think that religion is far from the truth and it makes the strongest effort to hide the truth. It is the same with cult religions prevailing on earth.

Such being the case, dubious cult founders will be eradicated not before long. So will be the channelers connected to evil organizations.

Ms. Emery Smith talks in detail about an underground library in the Vatican. Such thing will be known to the world at some future date. The testimony by Ms. Smith clearly shows that although they totally knew about the existence of aliens and their visit to earth, the Vatican has hidden the fact.

A grand-scale of “sexual abuse” on boys by the Catholic Church priests globally reported! More than 3,600 children in Germany and thousands of children in the U.S. have been victimized!

The actual situation of a grand-scale sexual abuseagainst little boys by Roman Catholic Church priests mainly in the West has been reported and has come to an issue.

According to the mainstream media, 1,670 priests raped 3,677 minors in Germany and it is likely that hundreds of priests have raped more than hundreds of boys in the U.S.

The Supreme Court of the Pennsylvania, the U.S. published a report by the grand jury on sexual abuse on boys and girls by the Catholic priests.The report includes a list of real names of more than 300 priests who committed abuse.The report also points out the cover-ups by the Church.

The grand jury investigated 500,000 pages of inner documents on eight dioceses in the state and carried out hearing investigation of the parties concerned over two years. It has been revealed that more than 400 priests were involved in abuse over more than 70 years and the grand jury published the names of more than 300 priests, including the late, who were found guilty.

The number of victims revealed by the document is 1,000 but the grand jury considers the actual number of victims will amount to thousands. Many of the victims are boys but girls are also included. There were many victims before puberty. The Church did not report accusations of abuse to the police and carried out shoddy inner investigation, or dislocated perpetrators to another diocese to prevent the problem from making it worse.

By Gen Takano, Berlin
The Asahi Shimbun on September 13

It was revealed that 3,677 children in Germany were assaulted by Roman Catholic priests between 1946 and 2014, a leaked report has revealed.An investigation report will be released in near future by the Germany Bishops Conference, German outlet Spiegel Online reported on September 12.

According to Spiegel, at least 1,670 priests got involved in sexual abuse.Most of the victims were boys, and more than half were aged 13 or younger. No reason for sexual abuse is mentioned in the report.
<snip>
Pope Francis stands up against the criticism because the letter calling for his resignation by within the Church has been released.


d. The reality of hideous crimes by Roman Catholic (The Vatican) globally reported now! “Shift of power elites” inside the world in progress! 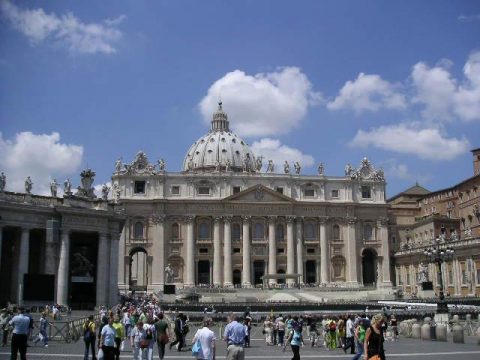 Organized sexual abuse against small children by the Roman Catholic Church has been viewed with suspicion and talked a lotamong some people who seek truth for a long time.The reality about it has finally been reported by the mainstream media in the world.

The case which has been treated as a kind of conspiracy theoryfor a long time has finally started being highly reported by the mainstream media.It would be better to think that “something” is happening inside the world.

<snip> We should think that a great number of priests have continued to rape an incredible number of boys over many years in the Western countries where the Catholic Church has great power. The Catholic Church is a truly abnormal cult group totally beyond ordinary people and this is the reality of so-called Satanism carried out by the global elites. In the midst of criticism globally heightened against Pope Francis, the Vatican apologizes about this station and claims that we “side with victims.” However, needless to say, this is the character of the whole Roman Catholic Church and it is likely that Francis himself is a pedophilia.
<snip>
This might be also part of “global reformation” which started with Mr. Trump’s presidential inauguration as expected.
The whole picture cannot be seen clearly, but we’d like to look carefully at how the “revolution” which is in progress mainly in the West will move.

The Roman Catholic Church has at the center of ado again with sexual abuse of children. It was revealed that bishop and other clerics were pedophiles and had sexually abused children in Pennsylvania, U.S.Although the Church covered-upsuch “faults”, the Church could not ignore this problem because of the opposition movement by human right activists and the anger of the society.The Sputnik reports about the children sexually abused by clerics and Pope’s point of view on this scandal.

Global scandals, that is, issue of sexual abuses by priests over several decades have shaken the Catholic Church.

In the middle of August, the U.S. grand jury released study findings that more than 300Catholic priestsin Pennsylvania had sexually abused minors. The scandal covered at least 6 areas (Allentown, Erie, Greensburg, Harrisburg, Pittsburg and Scranton). The study shows that at least 1,000 children have become victims of lustful priests over a period of 70 years.

The report says: “We believe the real number of childrenwhose records were lost or who were afraid even to come forward is in the thousands” and “Priests raped little boys and girls, and the men of God who were responsible for them not only do nothing; they hid it all.”

The grand jurors pointed out that there have been other reports about child sex abuse within the Catholic Church. But this is an unprecedented scale of child sex abuse.

Specific examples covered by CNN, which are listed in the report, are egregious cases. In the Greensburg diocese, a priest impregnated a 17-year-old girl, forged a pastor’s signature on a marriage certificate and divorced the girl months later. According to the grand jury, the priest was allowed to stay in ministry even after everything was revealed. In Harrisburg, a priest raped five sisters from the same family. In Pittsburg, church officials say that a 15-year-old boy “pursued” and “literally seduced” a priest.A church repot later acknowledged that the priest had admitted to “sado-masochistic” activities with several boys.

Note: * & **
Most part of the two sections above is reproduced from:
https://edition.cnn.com/2018/08/14/us/pennsylvania-catholic-church-grand-jury/

The sex scandal revealed this time is just one of many other scandals. Therefore, we can conclude that child sexual abuse by priests of the Roman Catholic Church is global issue of urgency. In 2009, it was found that sexual abuse by about 50 priests in the Dublin archdiocese was covered up (only 10 got convicted). In 2011, it was revealed that priests of Roman Catholic Church in Holland had sexually abused thousands of children over 60 years..

The issue has become the global-scale issue. However, the Vaticanpretended not to notice the inconvenient tendency among priests and called the situation as “sin” or “fault” by each priest. On July 25, PA attorney general sent a letter to Pope Francis. The letter asked for the Pope to encourage other church leaders to heel his words and abandon their “destructive efforts to silence survivors.”

The Vatican showed at least verbally a very strong response to the report on the sex abuse in Pa.On August 20, Pope Francis made unusually strict comment to new revelation.  A part of the announcementby the Vatican official information site “Vatican news” is as follows:

“With shame and repentance, we acknowledge thatwe were not where we should have been, that we did not act in a timely manner, realizing the magnitude and the gravity of the damage done to so many lives.We showed no care for the little ones; we abandoned them.”

Irish abuse survivor Mary Collins accused the Vatican of half measures on Twitter.

“Statement from Vatican or pope should stop telling us how terrible abuse is and how all must be held accountable. Tell us instead what you are doing to hold them accountable. That is what we want to hear. “Working on it” is not acceptable explanation for decades of “delay.”

Collinspointed out that regardless of Pope’s agreement, the Vatican eventually did not establish a tribunal to study reports on improper acts by priests.

Statements from Vatican or Pope should stop telling us how terrible abuse is and how all must be held accountable. Tell us instead what you are doing to hold them accountable. That is what we want to hear. “Working on it” is not an acceptable explanation for decades of “delay”
— Marie Collins (@marielco) 2018年8月20日


The current problem is whether Pope Francis has enough determination and authority to change the situation which is far from holiness.

Note: ***
The section is partially reproduced from:
https://fox43.com/2018/07/26/pa-attorney-general-sends-letter-to-pope-francis-on-child-sex-abuse-investigation/