Undoubtedly, a new era will be age of Asia – President Putin who supports China’s “One Belt One Road” initiative, says: “The initiative meets our efforts to build the Eurasian Economic Union.”

Since Russia and China aim at not hegemony but co-existence and co-prosperity, a new era will undoubtedly be age of Asia led by the Eurasian Economic Union.

According to the Fulford report below, the military government behind Trump “is solidifying its position as representative of the West in negotiations with the Eurasian alliance.” Furthermore, it would appear that a new way to run the planet is being talked about in negotiations.

True ruling elites who steer the nation and spirit beings of Light or Darkness have engaged in negotiations not in the center of political stage but behind the scenes.

Beings of Darkness (devils and aliens and underground beings who cooperate with devils) are completely being wiped out and deities are preparing to spiritually guide them. The center of such spiritual guide would certainly be Japan and Yatagarasu Mr. Fulford gets in contact with. Directions from deities would be delivered by Yatagarasu to five dragon societies and to various organizations.

According to the Fulford report, “Kim Jong-un is the leader of an alliance that controls China as well as much of East Asia.” It is convincing information.

Partial English translation of the Japanese version of Sputnik – June 6, 2018 –

President Putin: What the “One Belt One Road” Initiative means for Russia 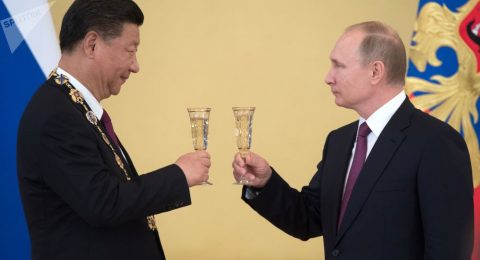 Russia perceives the “One Belt One Road” initiative as an important and promising initiative and they have good plans for railway infrastructure development, Russian President Vladimir told in an interview with China media.

President Putin will take part in the Shanghai Cooperation Organization Summit scheduled to be held in Quindao.

*President Xi Jinping said that the “Belt and Road Initiative” aims to build a community of humanity’s common destiny. China media asked what President Putin thinks about this concept. President Putin answered: “we believe this is a useful, important and promising initiative. It meets our efforts to build the Eurasian Economic Union.”

*President Putin also said: “President Xi Jinping’s idea, as we see it, is more global: it aims to develop cooperation with all countries and continents. We have a general idea of Eurasian economic cooperation. I think that all of this adds up and may have a positive outcome.”

*President Putin added: “We have good plans for industrial cooperation and railway infrastructure development as well. These are all powerful and promising areas that will for sure become the foundation of our cooperation.”

Note: *These three paragraphs are reproduced from
http://en.kremin.ru/events/president/news/57684

Tectonic shifts in the geopolitical landscape continue at a dizzying pace around the world, multiple sources agree. The situation has proceeded so far that the Khazarian big Kahuna, Israel, may soon be liberated from the satanists, Pentagon sources say.

The summit next week between U.S. President Donald Trump and North Korean leader Kim Jong-un, is about far more than just peace in the Korean peninsula. According to the Gnostic Illuminati, Kim Jong-un is in fact…
the leader of an alliance that controls China as well as much of East Asia. <snip>
a look at the overall world situation leaves it beyond a doubt that the U.S.-dominated Western military-industrial complex and a Eurasian alliance are negotiating a new way to run the planet.

Also, in Washington, DC, “Deep state and Zionist agents are history, as the Department of Defense takes over the security clearance process for the whole of government to allow only white hats and patriots,” the sources say.

What all this means is that the military government behind Trump is solidifying its position as representative of the West in negotiations with the Eurasian alliance.