Pope Francis:“There is no hell, there is the disappearance of sinful souls.” – Bad souls will be destroyed and never reincarnate –

image: photo-ac
Pope Francis:“There is no hell, there is the disappearance of sinful souls.” – Bad souls will be destroyed and never reincarnate –
I find the article below very interesting. Pope has made an interesting statement. The Pope says: “our species will disappear in a certain moment” and “God will create new species.” This is about “good souls” as described in the article.

Channeling-related information presents a similar idea. It is believed that souls that have grown up as Earth vibrations increase will move to another planet, depending on how much they evolve and new species appropriate for Earth evolution will be born on Earth.

The problem is the response of the Pope to a question of what happens to bad souls. The Pope answers: “There is no hell, there is the disappearance of sinful souls.” This is absolutely correct.

People who listened to lectures on Reformation of Heavenly World at that time must realize it. Deities sent light to Earth more than 80 times to carry out such a large-scale reformation. You can read the details about the reformation in a series of urgent information in the past.

I have claimed that bad souls will be destroyed and never reincarnate. Pope Francis has verified the correctness of my statement. And more specifically, people whose souls (Jiva) have been destroyed but whose souls (Monad) have survived will disappear after death but spend a lot of time starting all over from scratch. Many humans will start again from mineral, because only one out of every 1000 people has good soul.

For people whose souls (Monad) have been destroyed, they will completely disappear and they will be no longer able to start again from scratch. Physical level judgment has being carried out on Earth. Although most of earthlings have already lost their souls (Jiva), they now sit for a screening which determines whether their souls (Monad) will continue to exist or not.

Please keep in mind that people who feel antipathy to the messages I send on the blog are in danger. Although I just tell the truth, people have attacked me one after another on a spiritual level.

Such people, who have already lost souls (Jiva), will have souls (Monad) disappear in time if continuing such attacks. This is the last warning from me. I warn people who are engaged in channeling to pay attention to their deed.

“There is no reincarnation of souls. There is no hell, either,” Pope Francis says decisively and furthermore clarifies materialism he believes. Update on where Chinese space station fell 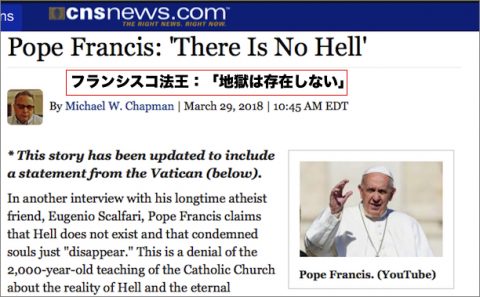 CBS News
Pope Francis made a statement at a Vatican meeting by saying “there is no hell” and furthermore “souls will disappear after death.” This statement has garnered worldwide attention because it seems to have negated the “existence of eternal souls” Roman Catholic has advocated for a long time.

In another interview with his longtime atheist friend, Eugenio Scalfari, Pope Francis claims that Hell does not exist and that condemned souls just “disappear.”

Scalfari says to the Pope, “Your Holiness, in our previous meeting you told me that our species will disappear in a certain moment and that God, still out of his creative force, will create new species. You have never spoken to me about the souls who died in sin and will go to hell to suffer it for eternity. You have however spoken to me of good souls, admitted to the contemplation of God. But what about bad souls? Where are they punished?
Pope Francis says,
“There are not punished, those who repent obtain the forgiveness of God and enter the rank of souls who contemplate him, but those who do not repent and cannot therefore be forgiven disappear.”
“There is no hell, there is the disappearance of sinful souls.”

“The Holy Father Francis recently received the founder of newspaper LaRepubblica in a private meeting on the occasion on Easter, without however giving him any interviews. What is reported by the author in today’s article [in La Repubblica] is the result of his reconstruction, in which the textual words pronounced by the Pope are not quoted. No quotation of the aforementioned article must therefore be considered as a faithful transcription of the words of the Holy Father.”

Looking back on the history since this Pope who assumed the post, it is no wonder that he has made such statement. Many interviews with the Pope in the past make us realize that he originally never believes in eternal life.

Article in 2014
*“Enemy of God appears”: Pope Francisdenies the Creation by God and affirms Big Bang and Evolutionary Theory in aspeech
In Deep 2014/10/30

Since we have got to know about the “miraculous structure” of animated beings including humans, it is no wonder that we have the “illusion about God as a magician.”
Nowadays intelligence design or cosmic intelligence is more often used than the expression “God.” Whatever expression may be used, Big Ban or evolutionary theory is too “insufficient” to explain the miraculous reality of biological beings on Earth.

“Where did life come from?” (Japanese title) by Sir Fred Hoyle, Chapter 14

Incidentally, the concept of “eternal hell” is specifically shown by the event of “Our Lady of Fatima,” in which a “being who claimed herself as Virgin Mary” appeared in succession at a place called Fatima in Portugal in 1917 and talked to people there.
A being who claimed herself as Virgin Mary left three messages. The first message is as follows:
The fist message of Our Lady of Fatima
“Many people are going to hell after death due to sinful life and tendency. Unless repenting of worldly sins such as fleshly lust or arrogance, people go to eternal hell after death. Hell is not a myth but it actually exists. All people are likely to go there after death and once they enter there, they are no longer able to get out of there.

<snip>
The article above clearly shows that the leader of Christianity is a materialist and Manichean in that he “never admits the existence of eternal souls.”