President Vladimir Putin blasts Pope Francis and exposes him as a “servant of Satan.”

I have claimed on this blog that Pope Francis is a Satanist. I also conveyed that there is proof that the pope got involved in pedophile scandal.

Changes have been escalated on Earth since 2011, which is closely related to the reformation of heavenly world which had been carried out since 2007. I think that Pope Francis has been believed to actively participate in the reformation and Mr. Fulford has viewed the pope favorably.

Although Pope Francis and the representative of the Society of Jesus were supposed to turn over a new leaf on the plasma body level and cooperate in a plan of deities, they subsequently fell into Darkness. I thik that they will have no chance for salvation. 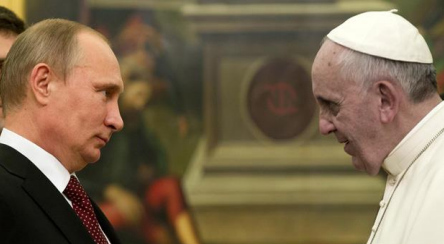 Vladimir Putin has exposed Pope Francis as a servant of Satan
(*Note from translator: It does not necessarily mean that President Putin had an interview with the pope.)

Russian President Vladimir Putin has blasted Pope Francis by exposing him as a "servant of Satan."  http://www.neonnettle.com/tags/vladimir-putin

Russia's leader has spoken out to expose the leader of the Catholic Church by claiming that he doesn't represent the Christian faith, but is rather an agent of the Devil with an agenda to mislead his loyal flock.
http://www.neonnettle.com/russia

Once again, Putin has demonstrated that he is the most perceptive and honest leader the world has since for a long time by standing up to the global elite in defense of the world's citizens. http://www.neonnettle.com/tags/elite

The Russian President’s statement came on a visit to the Naval Cathedral of St. Nicholas in Kronstadt.
http://antoniusaquinas.com/2017/08/07/vladimir-thegreat-sums-up-pope-francis-the-fake/

Mr. Putin succinctly sums up what Pope Francis is not:

"If you look around at what he (the Pope) says it’s clear that he is not a man of God.

"At least not the Christian God, not the God of the Bible.

"He is a servant of Satan who is working to destroy traditional Christian values."

Simply put: Jorge Bergoglio is just a layman masquerading as a pope.

Not only is Pope Francis a Christian fraud as Vladimir Putin and other perceptive commentators have observed, but in secular matters, he is a neo-Marxist in economic thought, a One-World Government advocate, and an enthusiast of open borders and mass migration. In other words, an enemy of what is left of Western Civilization.

“Pope Francis is using his platform to push a dangerous far-left political ideology on vulnerable people around the world, people who trust him because of his position

“As we have seen before in communist states, this system is not compatible with Christianity.”

Pope Francis is now the third pedophile Pope who has presided over the Church’s Great Sex and Embezzlement Scandal.

Neither Francis or his two derelict predecessors (Benedict XVI, JPII) have done anything to either punish or root out the child predators under their charge.

On the contrary, Francis has encouraged perversion with his now infamous statement of “who am I to judge.” 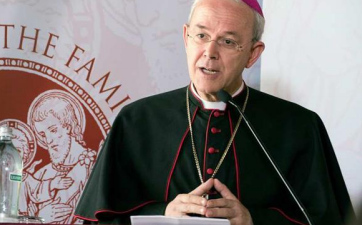 Pope Francis often blasts his critics as "anti-Catholic" but now an uprising has begun from within the religion itself.

In November last year, one of the highest-ranking officials in the Catholic Church claimed that God came to him in a vision and told him to warn Christians that Pope Francis is "evil" and a "false prophet."

Father Thomas Weinandy, was formerly the doctrine chief of the U.S. Conference of Catholic Bishops (USCCB) but was sacked after he published a letter attempting to expose Pope Francis, saying that a "clear sign" from God convinced him he had an "apostolic mandate" to write it.

The letter revealed that Pope Francis's papacy is marked by "chronic confusion," the diminishment of doctrine, and a "culture of fear" that is being used to usher in an "evil New World Order agenda."

Weinandy said that God told him that Francis, real name Jorge Mario Bergoglio, is using his power and influence to steer his flock away from traditional Christian values and towards "Satanic politics."