What is described as global elite pedophile rings in the article seems to have almost the same meaning as the Iluminati. It follows that President Trump has declared to eradicate these groups.

Apparently, the declaration frightens pedophile rings. The site administrator of the Japanese article says in note from translator at the top of the article: “These people are in a hurry to cause World War III.” I think that this is exactly true. Probably false flag operation on Iran is planned to be launched for this purpose. However, I think that they will have zero chance of success.

Excerpt from a Japanese article: Design of Creation Society – January 4, 2018 –

*[Note from translator]
Trump vowed to address this problem before assuming the presidency and said that pedophiles will get the death penalty.
http://www.neonnettle.com/news/1797-donald-trump-pedophiles-willget-the-death-penalty
As soon as a new year started, Trump made a statement about this before everything. It shows his strong determination on the problem. He ordered to prepare for a great number of high-level government officials in the Guantanamo Bay detention camp. (Probably these people are in a hurry to cause World War III.) Naturally, mainstream media including in Japan won’t report the fact, because they are in a position to protect elite pedophile rings. Those who protect criminals are also criminals.

*This section is translated by Shanti-phula. 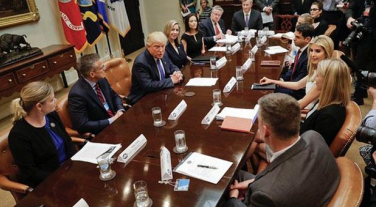 With the recent announcement on the official White House website stating that 2018 will be the year the Trump administration takes down global human trafficking, the statement also named January as “National Slavery and Human Trafficking Prevention Month.”
http://www.neonnettle.com/news/3492-trump-announces-he-ll-take-down-elite-pedophile-rings-on-white-house-website

Trump also promised that he would “recommit” to “eradicating the evil of child enslavement" adding that “Human trafficking is a modern form of the oldest and most barbaric type of exploitation,” the press release on Friday read.

“It has no place in our world. This month, we do not simply reflect on this appalling reality. We also pledge to do all in our power to end the horrific practice of child trafficking that plagues innocent victims around the world.”

There are currently 25 million adults and children enslaved globally for “for both sex and labor,” with sickening crimes used by the elites to enslave humanity.

“Human traffickers prey on their victims by promising a life of hope and greater opportunity, while delivering only enslavement,” the release continued.
https://www.whitehouse.gov/presidential-actions/president-donald-j-trump-proclaims-january-2018-national-slavery-human-trafficking-prevention-month/

Trump also revealed the effective measures he will be using to eliminate child trafficking.

“In February, I signed an Executive Order to dismantle transnational criminal organizations, including those that perpetuate the crime of human trafficking."