Safe and non-hostile “historic Iranian land bridge” between Tehran, Baghdad, Damascus and Beirut has been opened – A threat to Israel and American imperialists –

image: Author:TownDown [CC BY-SA] & pixabay[CC0] 1 & 2
Safe and non-hostile “historic Iranian land bridge” between Tehran, Baghdad, Damascus and Beirut has been opened – A threat to Israel and American imperialists –
I’d like to introduce two very interesting articles on the situation in the Middle East. As written in the first article, the Syrian conflict ended with a victory of Syria, Russia, Iran and Hezbollah. That’s why the House of Saud and U.S.-backed alliance have fallen into chaos. Crown Prince Mohammad carried out drastic reforms for survival of Saudi Arabia. He proposed a reform plan to have Saudi Arabia go back to moderate Muslim. His action seems to be so reckless that it will usually end in assassination of Crown Prince Mohammad. However, we can say that Saudi Arabia is being driven into a corner that much.

Media attacks against the Trump administration on Russia-gate apparently suggest the confusion in the U.S. The U.S. has been trapped in de facto civil war beneath the surface. As described in Fulford Report, the U.S. armed forces don’t want the public to know the outbreak of a civil war inside the military/industry complex. In such cases, they often create a crisis situation or confusion outside to distract attention from it. The declaration by President Trump recognizing Jerusalem as the capital of Israel is exactly something like that. The military supporting the Trump administration has to bankrupt the U.S. at the best of times. Therefore, we had better see that North Korea crisis is orchestrated.

According to the first article, failure of the “Daesh conspiracy” plotted by the U.S. has led to achievement of “historic Iranian Land Bridge” this month. It turns out that “a safe and non-hostile road has been opened for the first time”, which is between Tehran, Baghdad, Damascus and Beirut.

This is a threat to not only Israel but also to American imperialists represented by the neocons.

According to their old scenario, they intended to topple Syria using the Daeish and then fight against Lebanon and Iran to cause Armageddon. I suppose that they had an optimistic view that they could achieve victory in war with pre-emptive strike on Russia. However, we have seen the reality after the 9.11 that the U.S. and its coalition was so weak that we can call it a comedy. They were not much for Taliban in Afghanistan and local commanders got neurotic one after another.

On the other hand, Russia, Iran and Hezbollah are stunningly strong and the Syrian army is stunningly brave. The U.S. and its alliance is not match for them. It appears that Israel cannot win even Lebanon without support of the U.S. as it stands.

As described in Fulford Report, Israeli Defense Secretary has no intention of waging war on Iran, because he knows that Israel will disappear. Judging from the situation, it is believed that tensions will rise mainly in Israel.

As I told you before, Mr. Netanyahu is not a villain and Mr. Kushner is not a Zionist. Please remember that Dr.Kissinger predicted the end of the nation of Israel in ten years. Dr. Kissinger who controls Trump’s diplomacy thinks of establishment of the State of Palestine and eventually disappearance of Israel, with careful attention no to cause disturbances of war. Prime Minister Netanyahu, Mr. Kushner, Crown Prince Mohammad and military personnel supporting President Trump work together in accordance with this policy. President Trump is made to play the fool without knowing thing about this strategy. The military takes precautions to prevent the president from pushing the nuclear button by conveying to the president that they may refuse to follow his orders considered to be illegal.

As I have commented, Israel will be forced to change the conventional policy under strong pressure in the same way as Saudi Arabia is. This is what is going on now.

But now as 2017 comes to a close, the Syria-Hezbollah-Iran alliance appears victorious, and it's the House of Saud and US-backed alliance that is fragmented and in shambles.  <snip>

This week Hezbollah's Secretary-General Hassan Nasrallah has once again accused the United States and its allies in Syria of aiding ISIS.   <snip>

But what is the truth behind what Nasrallah calls "the Daesh conspiracy"?   <snip>
It is important to chart the significance of the establishment of the historic "Iranian land bridge" which occurred this month.

Below is a dispatch authored and submitted by Elijah Magnier, Middle East based chief international war correspondent for Al Rai Media, who is currently on the ground in the region and has interviewed multiple officials involved in the conflict. 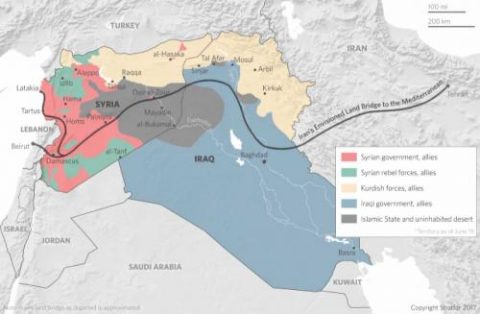 A US buffer zone in northeastern Syria and a land-bridge from Tehran to Beirut. Map source: Stratfor

Following the victory of the Syrian army and its allies over the “Islamic State” group in the town of Albu Kamal in the northeast of the country, the road has been opened for the first time since the declaration of the Islamic Republic of Iran in 1979 between Tehran, Baghdad, Damascus and Beirut and become safe and non-hostile to the four capitals and their rulers.

Today ISIS has lost all cities under its occupation since July 2014 in Iraq and before this date in Syria. Therefore there is no legal reason for the presence of the US forces in the Levant.

The United States will no longer be able to block the Iraqi-Syrian road (Al-Qaim-Albu Kamal) because it is related to the sovereignty of the two countries.

Progress report on the US-Russian war

Last week the anti-imperial camp scored an major victory with the meeting between Presidents Putin, Rouhani and Erdogan in Sochi:  <snip>  their final statement did not even mention the USA, not once. The “indispensable nation” was seen as so irrelevant as to not even be mentioned.

And now it is Russia, Iran, Hezbollah and Turkey who defeated the terrorists and who will call the shots in Syria.

Finally, when the USA realized that putting Daesh in power in Damascus was not going to happen, they first tried to break up Syria (Plan B) and then tried to create a Kurdish statelet in Iraq and Syria (Plan C). All these plans failed, Assad is in Russia giving hugs to Putin while Iranian Revolutionary Guards Corp Quds Force Commander General Soleimani is taking a stroll through the last Syrian city to be liberated from Daesh.

Can you imagine how totally humiliated, ridiculed and beat the US leaders feel today? Being hated or resisted is one thing, but being totally ignored – now that hurts!

The Syrian won and not amount of airstrikes will change that. So just to make sure they still look really fierce, the Israelis are now adding that in case of a war between Israel and Hezbollah, Secretary General Hassan Nasrallah would be a target. <snip>

Can you hear the giggles coming out of Beirut?

The scary thing is that the folks in DC, Riyadh and Jerusalem hear them loud and clear which means that sooner or later they will have to do something about it and that “something” will be the usual nonsensical bloodbath this “Axis of Kindness” has been made famous for:

This war is far from over, I don’t even think that we have reached it’s peak yet and things are going to get worse before they get better again. But all in all, I am very optimistic that the Axis of Kindness will bite the dust in a relatively not too distant future.