[President Trump’s remarks on Jerusalem] Muslims unite and procedure for saving Palestinians who have been abandoned can be seen.

image: pixabay[CC0] 1 & 2
[President Trump’s remarks on Jerusalem] Muslims unite and procedure for saving Palestinians who have been abandoned can be seen.
The first article provides a clear-cut explanation on the Middle East, particularly President Trump’s “remarks about Jerusalem he recognizes as the capital of Israel.” Nobody can write such article without knowing the reality. Please read the full text in the original article.

U.S.-led coalition was defeated in Syria by Russia, Iran and Turkey. You can see a split up Middle East map which “presented the Israel dream.” Defeat in Syria shuttered the dream of the neocons and Israel into pieces.

Trump’s remarks have created an “atmosphere which unites Muslims,” and as a result, finally procedure for saving Palestinians who have been abandoned can be seen.

Lebanon targets 250,000 missiles at Israel. According to the article, Hizbullah, Iraqi and Iranian groups who are experienced in battle in Syria “stand ready.” Israel will admit the state of Palestinians, return their settlements and recognize Jerusalem as their capital or Israel will be exterminated.

The final battle Armageddon (which means a gathering of armies for a battle during the end times on Tel Megiddo) in the Middle East will produce the result which was completely different from what fanatic Zionists expected. They will unconditionally surrender or they will be exterminated.

Specifically speaking, all assets will be confiscated from the Rothschild family and they have to understand that if they don’t agree to distribute their assets to those people who they tormented, all family members will be destroyed.

The U.S. has tried everything else - and lost.  <snip> The global anti-Syrian propaganda campaign in favor of the Takfiris was unprecedented. It tried to build a political opposition and sponsored it with hundreds of millions. It lastly invaded the country and tried to split it by force. It failed on all fronts.

In 2013 the author of the piece, Robin Wright, presented the Israeli dream of a split up Middle East. 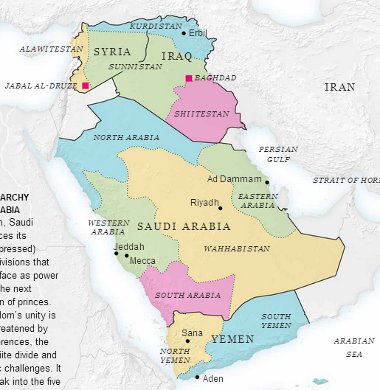 It was a remake of the "Blood Borders" map peddled in 2006 by the neoconservatives Col. Ralph Peters.  <snip>  Those maps went into the trash-bin when the U.S. had to leave Iraq.  <snip>

Wright is heavily wired in Washington.

It continues to dream of keeping Syria and Iraq under its thumb:

Col. John Thomas, spokesman for the US Central Command (CENTCOM), said that the international coalition forces would remain in Syria to support the operations of the Arab-Kurdish “Syrian Democratic Forces” until the conclusion of negotiations on a political solution in Geneva.

He added that the US forces would continue to fight terrorist organizations close to “al-Qaeda” in Syria, including al-Nusra Front, “regardless of ISIS presence.”

It was Israel that was behind (pdf) the campaign to dismantle Syria and Iraq. It utterly failed and the revenge will be harsh. Hizbullah is better armed and trained than ever. Battle experienced Iraqi and Iranian groups stand ready. The Syrian army is much better trained and equipped than before the war. The Iraqi resistance leader Qais Al Khazali recently visited south-Lebanon and took a look over the border into Israel. He was surveying the new battlefield.

Trump recognizes Jerusalem as the capital of Israel in accordance with the resolution of the U.S. Congress and it triggers the unification of Islam

In a speech of December 26 President Trump recognized Jerusalem as the capital of Israel. Since then Islam world has increased criticism against the U.S., which seems to have created the atmosphere of unification of Muslims.

However, this speech did not worsen the situation of Palestinians. Israel has repeated military invasions of Gaza and the Jordan west bank has been eroded by Palestinian settlements and changed into camps. This event has the people in the world just remind of Palestine.

Palestine had been abandoned by the world before Trump’s speech. After the death of Yasir Arafat, PLO has been under the thumb of Saudi Arabia but Saudi Arabia has built close relationship with Israel. It is Israel that has created Hamas (Islamic Resistance Movement) which is considered as PLO’s rival.

The Barak Obama administration declared to expel Bashar al-Assad in Syria, cooperated with Israel and Saudi Arabia and sent mercenaries mainly led by the Salafiyah (Wahhabiyyah, Takfiris) and the Muslim Brotherhood.

However, this aggressive war was stopped by Russia. Switching to Kurd did not make progress as they expected. The longer the war persisted, the invasion forces loosen bondage and Turkey and Qatar have broken away and have approached to Russia, Iran and Syria. Iran, where the Saddam Hussein establishment was toppled by first strike of American-led army, joined with this group. The influence of the U.S. in the Middle East has rapidly decreased and existence of Russia has been stronger. Some people think that Trump tried to bring the U.S. to the attention of the world.