Mr. Eiken Itagaki says that President Trump took action Dr. Kissinger had ordered to bar him from taking. However, this is old piece of information. Although President Trump expressed a plan to move the U.S. Embassy in Tel Aviv to Jerusalem from the very start of his presidency, he was barred from doing so by Dr. Kissinger. However, the president thought that the right time has come.

Read the tweets below in ascending sequence from bottom, and you will know what is going on. It is clear that Trump’s remark has driven Israel into a corner. President Putin has no intention of yielding to Zionists who never give up the NWO (New World Order) led by the Rothschild family. In other words, he tries to drive Israel into a corner with the resolve that he will not hesitate to go to war if necessary. If war breaks out, Israel will not exist. Simultaneously the Rothschild family will perish.

President Trump made this remark after the IS in Iraq and Syria was defeated, Saudi Arabia carried out the great purge of those involved in the 9.11 and the U.S. marine got evidence by entering the CIA headquarters. As Mr. Naoya Fujiwara tweeted, this is “attack on Israel.”

As President Trump says “the possibility of the U.S. government shutdown on 9 Saturday” due to Congress’ failure on budget, the U.S. is ready to run away on the pretext of budget. It follows that Israel will be abandoned at the last minute. Zionists including the Rothschild family are destined to accept the defeat or be destroyed. I suppose that no full-scale war will happen.

English translation of the Japanese version of Pars Today – December 6, 2017 –

Iran’s Supreme Leader: “All people have a duty to make efforts to liberate and save Palestinians.” 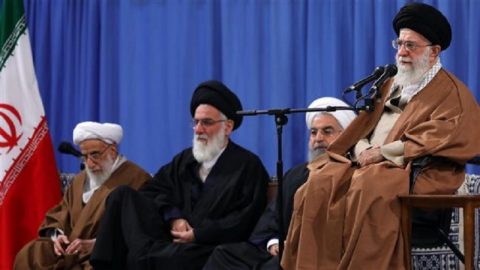 “All people have a duty to make efforts to liberate and save Palestinians,” Iran’s Supreme Leader/Leader of the Islam Revolution Khamenei emphasized.

He expressed his strong regret regarding some rulers in the region who obey the U.S. demand and said: “Iran never has intention of confrontation with Islamic states. We hope that solidarity and unification will be created in the Muslim world like in Iran where brotherhood and unification exist.”

Supreme Leader Khamenei said that the final purpose of the enemy to create an anti-Islamic group to have Shiite Muslim and Sunni Muslim fight with each other.

Grand Ayatollah Khamenei said that the Muslim enemy claimed Beit ol-Moqaddas to be the capital of the Zionist regime and it is due to their powerlessness. “The Muslim world will resist this conspiracy and Zionists will suffer more damage from it. And undoubtedly Palestine will be finally liberated,” he said.

Nezmisan
@Nezmi_san
Trump, the father-in-law of an Orthodox Jew, appeared and declared to recognize Jerusalem as the capital of Israel. Is his intention is either (1) to fulfilment NWO or (2) to have NOW disappear? It’s time to make a judgement.

Nezmisan
@Nezmi_san
Israel was founded based on the NWO agenda, but Kissinger told
New York Times that Israel would not exist within a decade (by 2023).
http://www.asyura2.com/11/kokusai6/msg/895.html

Nezmisan
@Nezmi_san
The Rothschild family says that it established Israel.
However, meaningless discussion is made everywhere in Japan particularly when the prostitute mass media which never tells the truth is the only information source.
youtube.be/f82KvHnNmQE

Yosuke
@yoshimichi0409
Press Secretary of Joint Chiefs of Staff of the Islamic Republic of Iran Army: “Israel will undoubtedly disappear.”

The press secretary says that strong resistance of Palestinian people and fall of the U.S. will leave Israel no alternative other than to disappear. Approval of Jerusalem as the capital of Israel will only accelerate this move. http://parstoday.com/ja/news/iran-i37509

Press Secretary of Joint Chiefs of Staff of the Islamic Republic of Iran Army: “Israel will undoubtedly disappear.”
Wrong analysis by the U.S. ruler and the occupant of Palestine will lead the Zionist administration to disappearance, not to relief of Palestinians.
http://parstoday.com/ja/news/iran-i37509

Naoya Fujiwara
@naoyafujiwara
Nowadays any language can be easily translated into Arabic on the Internet.
Front-page news of Russian Sputnik Arabia

Naoya Fujiwara
@naoyafujiwara
Several months ago, Hezbollah leader warned Jews in Israel that they should go back to their homeland they leave because there will be no time to return home if a war breaks.

Naoya Fujiwara
@naoyafujiwara
IS in Iraq and Syria has been smashed, the real picture of American Zionistshas been revealed by release of information and the reality of royal families in the Middle East who do anything for money, that is, anti-Islam people has been revealed every day. And as a result, Jerusalem has been completely under siege and in an unescapable situation.
https://www.vox.com/world/2017/11/1/16591458/new-york-attack-isis-islamic-state-strategy

Naoya Fujiwara
@naoyafujiwara
Interestingly, it is Israel that the U.S. made a declaration of war on.

Naoya Fujiwara
@naoyafujiwara
Vice President Pens puts a frowning look on his face.
Trump looks tense. The way to settle the Middle East issue is to have
Israel globally isolated by encompassing it and finally induce Israel to start a war.
http://www.israelhayom.com/2017/12/07/next-year-in-jerusalem/

Naoya Fujiwra
@naoyafujiwara
HAARETZ: The Other Jewish Homeland at the End of the World
https://www.haaretz.com/world-news/europe/.premium-1.822075

Naoya Fujiwara
@naoyafujiwara
I wonder if the Israel right-wing doesn’t realize that Trump conspired to make Israel globally isolated. His approach is more dramatic than Obama’s. They will be defeated in a showdown battle.

Naoya Fujiwara
@naoyafujiwara
Putin will continue to take the presidency. There is no IS in Syria. It means it will fully attack Israel.