image: Author:WorldEconomicForum
Kremlin gives dire warning about U.S. support to terrorists in Syria – U.S. military white hats deviate from common sense –
You may think that the previous article was a preface to this article. The article is about Kremlin’s public warning against Washington D.C. Russia has issued a warning against silly actions of the U.S. Russian defense spokesman Koanshenkov stated in an official capacity: “Russian armed forces in Syria are prepared to totally destroy all such ‘random events”.

According to the article, it appears that President Trump is not involved in support to terrorists by the U.S. forces. However, it appears that the current Trump administration is the military government and Secretary of Defense Mattis regime controls such affair.

Reorganization of the Middle East by independence of the Kurds has been a long-term agenda. I suppose that Secretary of Defense Mattis is the supporter of this agenda.

I think that the military personnel in the Trump administration are very immature humanly and politically. According to Mr. Fulford, top echelons of the military in Russia, China and the U.S. have agreed not to cause World War 3. However, their words and actions clearly show that the U.S. forces recognize Russia and China as the enemies and think nothing of massacring local people.

Such people are called the U.S. military white hats. We can see that their common sense is far from common sense in the truest sense of the term. However, confrontation with the Khazarian mafia should be evaluated. We can say that the current Trump administration is at least better than the former Obama administration.

Excerpt from a Japanese article: Design of Creation Society – October 12, 2017 – 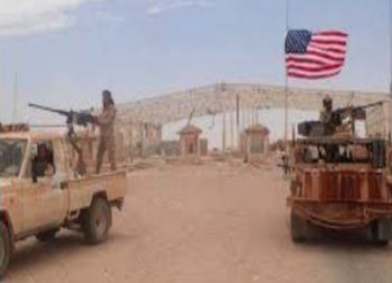 From time to time, the Kremlin uses the Sunday evening weekly news wrap-up program of Dmitry Kiselyov on state television, channel Rossiya-1, to send blunt and public warnings to Washington without diplomatic niceties.

That last question about who’s in charge in Washington has now re-emerged in the program that Kiselyov presented on Sunday evening.  <snip>  The United States is secretly aiding the Islamist terror groups at the center of the remaining resistance to President Bashar al-Assad’s regime: supplying the terror groups with weapons, helping them to move around, removing them from hostile fire, and giving them the findings of aerial reconnaissance, maps of where Syrian government forces are operating and even the locations of Russian military detachments.

Things have gotten to the point where the Russians feel that it is not the military capability of the Islamic State that stands in the way of routing the remaining terrorists from Syrian territory but this American assistance to the terrorists.

This analysis, said Kiselyov, is not his own idea: it is the official position of the Russian Ministry of Defense as issued through its spokesman this week, Igor Konashenkov.

“The Americans deny everything. But the RF Ministry of Defense does not believe their words, relying instead on facts. We recall in the past week how part of the main road connecting Palmyra and Deir Ezzor was taken over by the fanatics.

This is the main artery supplying the Syrian forces leading the offensive from Deir Ezzor against the remaining forces of the terrorists in Syria. De facto this was an attack in the rear. This was planned and facilitated by the Americans.

In parallel, on 28 September a large group of terrorists numbering about 300 men left the area of the American base in al-Tanf at the Jordanian border. In this area there is a refugee camp numbering tens of thousands.”

According to Kiselyov, the Americans have cut off the refugee camp, not allowing in United Nations or other humanitarian relief convoys, so as to use the camp as cover, a human shield, for the Islamic State fighters whom the U.S. military is supporting.

According to the warning from Russian defense spokesman Konashenkov, if the U.S. forces see these attacks by mobile units of terrorists whom the Americans are assisting as “unforeseen random events,” then Russian armed forces in Syria are prepared to totally destroy all such “random events” directed against the zone under their control.

Kiselyov asked why is this American behavior happening and whether President Trump made this decision.

But the question is rhetorical. Though it may seem “amazing,” Kiselyov suggested that it appears Trump was not a party to this behavior, that it more likely resulted from what the TV host called sloppy management when the military gets out from under political control. On the territory of Syria, Kiselyov said, “they start wandering around quite on their own” and “flirting” with the terrorist groups.

Konashenkov characterized the area in Syria under American control near the Jordanian border as a “black hole” that is 100 kilometers long. From this “black hole,” the terrorists come out to stage their attacks on Syrian troops and against the peaceful civilian population.

The show presented footage of Putin’s response to questions put to him at the Energy Forum in Moscow at mid-week.

“in the end, we all [presumably including the Americans] have common interests in securing Syria and the region against terrorists and that will bring us together for cooperative action.”

In the meantime, however, videos showed the results of Russian air activity in Syria this past week, including more than 400 sorties of Russian planes based in Syria, plus SU-134 and SU-135 bombers arriving from Russian territory that killed a dozen or more terrorist leaders together with 50 security personnel and seriously injured a top official who lost an arm and sank into a coma.

Russian air attacks destroyed the terrorists’ main underground weapons caches amounting to 1,000 tons, according to the report, and an attack by Kalibr cruise missiles launched from submarines in the Mediterranean destroyed Islamic State command installations and vehicles as well as weapons supplies. This attack cleared the way for Syrian troops to begin the liberation of the town of Meyadin.

The program left the dots unconnected, but the Russian threat is clear: Moscow will use its air power to eliminate all forces standing in the way of complete victory including U.S. forces on the ground near the Jordanian border.

The same news round-up had another segment that relates in less direct fashion to the Russian success in Syria: a state visit to Russia by the king of Saudi Arabia, the first in the two countries’ 90-plus years of diplomatic relations. And it was not a simple affair

Salman bin Abdulaziz Al Saud brought with him a contingent of 1,000 people, including business leaders, ministry officials and senior military officers. They came with a reported 100 tons of baggage, including favorite carpets and other accouterments of the royal lifestyle.

All aspects of this visit were impressive, including the signing of contracts and letters of intent for multi-billion-dollar joint investments in industrial projects in both countries, possible Saudi purchases of Russian Liquefied Natural Gas from yet another mega-project seeking financing and multi-billion dollar military procurement, said to include the latest S-400 air defense system.

Putin quipped to the moderator of the Moscow Energy Forum, also held during the past week, that nothing is forever, not even the U.S. hold on the Saudis.

Kiselyov placed the visit in the context of Russian foreign policy in the region generally. Putin, he said, is pursuing a policy of seeking peaceful harmony in the Near East that takes into account the balance of interests of all countries in the region, a policy which is paying off:

Russia is now the only country in the world to have good relations with Saudi Arabia, Iran, Israel, Turkey, Iraq and, of course, Syria.

From both segments it would appear that U.S. longstanding domination of the region is unraveling.