Just when I convinced myself that the Las Vegas shooting was impossible by a sole shooter, conspiracy theories have appeared one after another.

image: 1
Just when I convinced myself that the Las Vegas shooting was impossible by a sole shooter, conspiracy theories have appeared one after another.
The web “In Deep” administrator has picked up the Las Vegas shooting and written an article about a firm conviction: “the shooting was impossible by a sole shooter.” In the article he picks up the shooting by Charles Whitman in August, 1966 who was a marine and had outstanding shooting skill. According to the article, he sniped for about 1.5 hours, killing 10 people and wounding 30 people.

However, it is an unlikely event that a 64-year-old man seems to have no physical strength to fire indiscriminately fired from more than 300 meters, “killing 59 people and wounding more than 500 people.”

The article introduces there was eyewitness’ testimony that there were multiple shooters. According to the article, there was another shooting incident in Bellagio Hotel, which is 3.7 kilometers from Mandalay Bay Hotel. However, it seems that this incident has never been reported. The perpetrator’s next door neighbor in Mandalay Bay Hotel testified that “there were multiple shooters.”

Various kinds of video footages have been released on the Internet and there were undoubtedly multiple shooters. First of all, it is quite extraordinary that the audience was spotlighted at the concert venue before the shooting started so that the shooter could easily aim at them. Almost certainly, this is a false flag attack with the dead.

The last article is the transcript of the video I introduced before, which seems to convey the truth. I make extracts here. Reading the article, it appears that perpetrators of the shooting are the peers of Dick Cheney and Donald Rumsfeld who caused 9/11 staged event. They caused this incident under the Trump administration and this might be death throes. President Trump calls this situation “calm before storm” which may be related to the shooting.

Just when I convinced myself that the Las Vegas shooting was impossible by lone murderer, conspiracy theories have appeared one after another. There is a testimony: “There were seven perpetrators.”

I hardly pick up articles related to conspiracy theory. I pick up this incident because I got a strong feeling of strangeness on the event immediately after it was reported.

Partly because I have known the shooting by Charles Whitman since I was young.  <snip>   Timeline of the Texas shooting in 1966 was as follows:

Charles Whitman went to the observatory deck of Texas University’s tower at 11:45 a.m. on August 1, 1966. The tower is 70 meters above the ground level. He fired at random for some 1.5 hours, killing 10 people and wounding 30 people until 1:24 p.m. when he was shot and killed by police.  Charles Whitman, who was a marine, probably had outstanding shooting skill. He succeeded in shooting at the target up to 350 meters away. And this Charles Whitman’s incidence was “the shooting incident which sustained the heaviest casualties, whose record had not been broken for subsequent thirty years.”

However, this time unthinkable scale of shooting incident which “killed 59 people and injured more than 500 people” was caused by a suspect named Stephen Paddock, who was a 64-year-old elderly man with no military experience who looked drunken and down at the mouth?

Do you know the firing range? The map below, which is shown in ABC News article, shows the aerial view of the hotel, on which I write some explanations in Japanese. Surprisingly, the concert venue is the shortest distance of more than 300 meters away from the hotel.

Map shows an aerial view of the Mandalay Bay Hotel and Casino, the surrounding areas and the vantage point the shooter had from the hotel

When I saw locations related the scene, I got a strong feeling of strangeness. It made me can’t help but feel that “it is impossible by a sole shooter.” 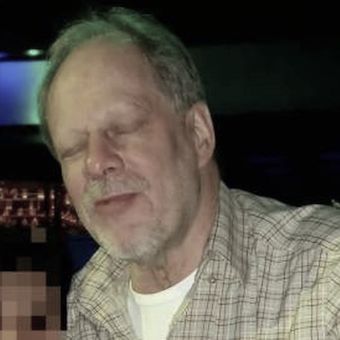 The Bellagio Hotel lobby was sprayed with bullets by a second shooter during the Las Vegas attack, according to hotel guests and staff who recount the horrific experience in a newly surfaced video.
Rene Downs made a Facebook Live video in the immediate aftermath of the shooting in Las Vegas, filming from inside the Bellagio Hotel
“This was NOT all done by one shooter. News and LVPD are not reporting this correctly,” said Rene Downs.

The Bellagio is 1.4 miles from the Mandalay Bay resort, where Stephen Paddock fired on the crowd, and bullets from his semi-automatic weapons could not possibly account for the incident at the Bellagio.

Stephen Paddock did not act alone. Video footage provided to Your News Wire by Las Vegas residents have proven conclusively that there was a second shooter operating from inside the Mandalay Bay resort.

Muzzle fire is clearly seen from the fourth floor, much lower than the 32nd floor where Paddock operated from.

Paddock’s next door neighbor in the hotel, Australian Brian Hodges, also confirmed the presence of multiple gunmen in the attack, telling Australia’s Courier-Mail newspaper, “‘There were multiple people dead and multiple shooters.”

English translation of an excerpt from Stop the New World Order – October 8, 2017 –

THE MOST IMPORTANT VIDEO ON THE WEB OF VEGAS SHOOTING! Key Players IDENTIFIED, THIS is it!

Somebody on 4CHAN has predicted what actually happened.  <snip>  Basically this anonymous poster says as follows:

They want us to think that more security is necessary even in places with high security and monitoring level.

Then who is a player involved?
Michael Chertoff, Chertoff Group.

Chertoff was United States Secretary of Homeland Security at the time of 9/11 under the Bush administration.

Chertoff holds dual citizenship in the U.S. and Israel. He let an Israeli spy walk and the spy returned home. The Spy was here in the U.S. Right?

Do you know what Chertoff and his group corporation produced?

They want to equip all these machines to every hotel.

Not only to hotels. Eventually, equip them to every place where we go.

Michael Chertoff – this traitor – is connected to a billionaire Sheldon Adelson.

“They say that this Adelson provides funding to this machine and Chertoff. That’s because he is connected to Chertoff.”