image: 1
Weather warfare between the Light forces and Dark forces staged behind man-made hurricane ‘Irma’
The Fulford Report below says that recent spell of hurricanes were engineered by weather weapon to retain control of the Federal Reserve Board. The interesting part of the report is “the White Dragon Society used its esoteric powers to weaken hurricane Irma.” WDS's efforts lead to weaken hurricanes. According to Pentagon sources, it means “the Cabal failed in their attempt to cause hurricanes, wars and mayhem.”

These facts are almost identical to my viewpoint except some details. I think that the forces that tried to minimize damages as much as possible achieved a victory. As a result, there is no possibility of assassination of President Trump and false flag operation of nuclear terror attack planned in the U.S. However, they will probably continue a battle over who should grasp a joystick in a new financial system.

I think this is right recognition. To put it the other way around, we can say that it would be a great victory if the finial battle between the forces of light and the forces of darkness ended with this level of damage. I suppose that it will take some time for humanity to have conviction that World War III will never happen. However, humanity is certainly going in the right direction.

I am not sure about the WDS’ esoteric powers, but the last paragraph of the second article mentions an attempt “to end geoengineering and the weather wars waged against humanity” by “global prayer and meditation.” This is certainly an effective way.

Deities put into action the “order to disband secret societies,” which was mentioned in an article dated September 9, in order to protect the forces that try to minimize damages as much as possible. As for details, please refer to the comment I mentioned in yesterday’s article. In this comment, I said: “At present, those who belong to the Freemasonry excluding very good people have only surface consciousness of narrowly-defined physical body.” In other words, “the ability to conjure storms, earthquakes etc. through esoteric rituals linked to astrological events” that the P2 Freemason Lodge had completely has been destroyed. They have no other choice but surrender.

The intense struggle at the highest levels of world power has become a Mexican stand-off with the Khazarian mafia staging weather warfare attacks on the US in a desperate attempt to retain control of the Federal Reserve Board. Hurricane Harvey, followed by Hurricanes Irma, Katia and Jose have all been associated with some sort of electro-magnetic beams emanating from Antarctica, US Navy sources say.
http://allnewspipeline.com/Indications_Irma_Weather_Warfare.php

In any case, a senior source in the P2 Freemason lodge hinted at their involvement in the attack by saying “There is no way out for America, only the big agreement.” The P2 have previously claimed the ability to conjure storms, earthquakes etc. through esoteric rituals linked to astrological events.

The White Dragon Society, for its part, used its esoteric powers to weaken hurricane Irma but did not stop it entirely because it felt the US government needed a reminder on the anniversary of 911 that legal action has yet to be taken against the perpetrators of that act and the people who stole the US Presidential election in the year 2000, senior WDS sources acknowledged.

Pentagon sources, for their part, say “Hurricanes, wars, and mayhem appear to be a failed cabal attempt to delay the global currency reset and gold-backed financial system as Irma downsized, and Katia, Jose lose their power.”

IRMAGEDDON: Who geoengineered Superstorm Irma and why?
Geoengineers Expose the Globalist Agenda by Manufacturing Hurricane Irma 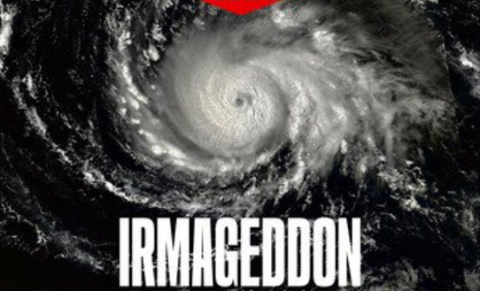 Make no mistake about it: Hurricane Irma was quite deliberately geoengineered as a highly destructive and deadly superstorm…just as Hurricane Harvey was.

The NWO globalist cabal has ordered the geoengineers to fabricate this frankenstorm as a direct threat to President Donald J. Trump and his administration.

Because Trump has decisively taken his wrecking ball to the covert scheme to impose a One World Government upon We the People.

However, Trump’s biggest reversal for the NWO cabal — BY FAR — was withdrawing the United States from the Paris Climate Accord.  <snip>  For that fraudulent agreement was the centerpiece of an evolving global totalitarian government which is somewhat modeled after the tyrannical European Union superstate.

Ever since HARVEY battered Corpus Christi and swamped Houston, there has been a steady drumbeat from the MSM about climate change being the underlying cause of the ensuing 1000 year flood in East Texas.

In order to understand just how pivotal the GCC scheme is toward the establishment of their One World Government, the article below ought to be carefully read.

That this widespread devastation by way of weather warfare is taking place in 2017, on the 100th anniversary of the Bolshevik Revolution of 1917, is no quirk of fate.

.. it is an essential prong of the Soros-sponsored Purple Revolution.
http://stateofthenation2012.com/?p=56307

In view of this very tense state of affairs, the entire planetary civilization is witnessing an epic battle between Team Trump and Deep State.  Such a cataclysmic war has never been fought before out in the open. Truly, this is the final battle between the forces of light and the forces of darkness.

Only when the true depth and breadth of this devolving predicament is comprehended will the American people seek the necessary solutions in another realm.

Hence, the following initiative is made available to every human being.

This worldwide prayer vigil is specifically intended to:

To End Geoengineering and the Weather Wars Waged Against Humanity