image: 1
Urgent message by high-level military source: Hurricane Harvey victims transported to FEMA camp are killed – The Rockefeller faction driven into a corner finally put a pre-planned conspiracy into action –
I have often commented that the U.S. is practically in a civil war. The first article shows it is true. I have picked up the horrifying situation described in FEMA-related news as conspiracy by the Illuminati since a long time ago.

Recently, I picked up it in an article on Jade Helm dated May 2015. In the article, I commented: “Jade Helm is not mere military drill. … It is apparent that the Obama administration has a great interest in rooting those who oppose to the government and transferring them to detention facilities.” The article read: “Walmart in various cities have been confiscated and transformed into concentration camps.” Walmart stores had been transit points from where people are transferred to concentration camps long before. It was rumored that underground tunnels leading to Walmart stores were built.

The first article, therefore, indicates that the Rockefeller faction driven into a corner has finally put a pre-planned conspiracy into action. The situation is different from that at the time of Jade Helm; the military supporting the Trump administration is regular military forces. The Trump administration supports a good cause and the Rockefeller faction would probably be eradicated. I have very often commented that we will see an end coming around the middle of September. I still think that I am not wrong.

Excerpt from a Japanese article – Trend of Japan, World and Universe – September 4, 2017 –

Hurricane victims in the U.S. killed?

Urgent Alert! Call to All Americans!

Earlier today we were contacted by a high level military source and asked that we provide the attached information to as many people as possible as quickly as possible. For safety and protection, we cannot reveal the identity of the key sources. We respect and value our sources, and provide them the same protection as we would expect them to provide for us.

Reports have been coming in from boots on the ground in the Houston metro area about FEMA/ DHS / police involved with shooting/ murdering hurricane victims.  Many hurricane victims are observed being loaded on to busses and transported to WalMart staging locations, then off to Louisiana where many are murdered.  These reports have been verified by appropriate high level sources, which is why this notice is now being circulated with a request to keep this information moving across the nation, especially to those areas expecting similar events as Houston is currently experiencing – hurricanes, flooding, earthquakes, … <snip>  Please provide the attached information to your own contacts ASAP.

… at this critical time during Hurricane Harvey aftermath with 2 more hurricanes pending   <snip>  If you are within 300 miles of a major coastline, get away to safety quickly. STAY AWAY FROM ANYONE OR ANYTHING FEMA OR DHS, and POSSIBLY EVEN LOCAL POLICE.

Hurricane “Harvey” hit Texas, whose low-altitude areas are reportedly flattened by the hurricane. There is information on another hurricane to come. 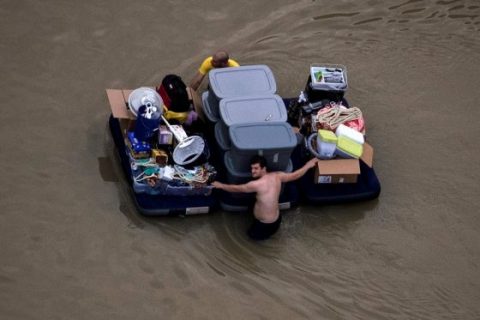 The US Army Corp of Engineers who arrived to help sent out a stark warning on 31 as follows:

*“The flood gates were opened to 100 feet at 3 pm CSDST. River levels will rise to near seventy nine feet. With additional rainfall accumulations, a potential elevation could reach near eighty two feet.  All residents living in Mt.Neches, Barlow Lake Estates, Works Bluff on CR 4415, Sheffield Ferry and Bottom Loop-CR 4700 who have not already evacuated must do so immediately.  Anyone who chooses not to heed this directive cannot expect to be rescued and should write their social security numbers in permanent marker on their arm so their bodies can be identified. The loss of life and property is certain.”

* Quoted from and pictures can be seen at:
https://uk.news.yahoo.com/texas-residents-told-evacuate-homes-die-amid-warning-water-levels-rise-80-feet-095709158.html

This is a notification exactly saying “if you stay, you will die.” Eighty feet is equivalent to about 24 meters. As it is the height of a mega-tsunami, nobody can survive. First of all, life should be secured. However, as is the case with Hurricane Catarina, it appears that residents had almost never prepared against disaster. The lesson from Catarina has not been learned and damage would be expanded.  September 3, 2017

Is the Government and HAARP controlling the weather?

Individual information of thousands of U.S. military and intelligence personnel has been leaked on the Internet due to an information protection system failure, “The Hill,” an American political journalism newspaper, reports.

According to the newspaper, leaked information includes addressed, telephone numbers, mail addresses and curriculum vitae of military personnel. Such information which has been collected for employment agencies was available for public download on a cloud storage.

However, it’s not until August that free-accessible data was removed because a problem on identification of leak source occurred.

“I hope we were the only people to find them,” Mr. Vickery told The Hill.

According to earlier report, “Deep Root Analytics,” a media analytic firm, erroneously left individual information of 198 million voters in the U.S. freely accessible to the public.