image: 1
Among those who were destroyed with order to disband secret societies were members of Light forces…
I think that this Cobra information is exactly true. It has been proved that “with Hurricane Meditation strong weather events can be dissipated.” In addition to this, deities provided support from behind as I have already conveyed, which has brought decisive victory. According to information from Mr. Benjamin Fulford, electro-magnetic beams emanated from Antarctica and P2 Freemason Lodge got involved in this event.

Since “order to disband secret societies” was put into action as support from deities, all secret societies represented by the Freemasonry and the Illuminati were forced to be disbanded. I conveyed that those who disagreed with this order had their plasma body destroyed and as a result, they barely survived and they had only surface consciousness of narrowly-defined physical body.

The problem is that we cannot simply say that the Light forces have achieved a big victory. There are many members of secret societies even in the group of so-called “comparative Light.” Just like the Cabal who orchestrate a conspiracy, they have been destroyed due to the order.

It is easy to represent the war on Earth graphically by simply dividing into two groups - Light forces and Dark forces –. However, the fact is quite complicated and each group has many people who are the embodiment of greed for power. It is natural to think that there are scarcely any pure-hearted people who stand up purely for peace of Earth.

As clearly demonstrated by the U.S. presidents, if a person wants to assume an important position, it is indispensable to be a member of the Freemasonry unless he or she is born into an influential family.
Judging by this, I guess that there are quite a few members of the Light forces who want to gain power in a new world.

I always say that ultimately, those who seek power will never survive. I say that only one in 1,000 people has soul. It is the same with members of the Light forces.

In this sense, RM (resistance movement) Cobra belongs to is not a group which obeys the will of God.

As you probably know, we were very successful in dissipating hurricane Irma, especially in the last phase of its journey through Florida: 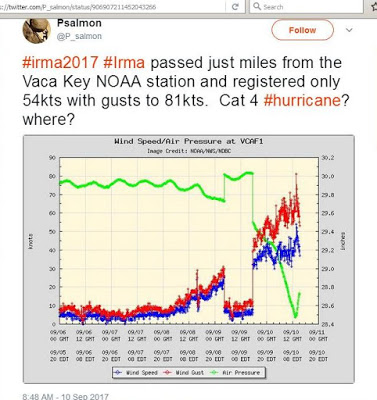 It was expected that Irma will directly hit Tampa as a powerful category 3 or 4 hurricane with 130 mph winds:

Instead, weather station in Tampa recorded 19 mph winds at the moment of the closest approach of the storm:

Critical mass of meditators to dissolve them is usually between 5000 to 10,000 people, which should not be too difficult to reach.
With Hurricane Meditation we have shown that strong weather events can be dissipated with the use of our free will and unified action and with our meditation.

（The rest is omitted）