image: 1 & 2
President Trump is described in a list of passengers to ‘Lolita Island’ – Relatively gray people fight against darker people in this world –
Detailed information of this Lolita Island has already been introduced in an article on February 24. The article says: “Mossad operates the ‘Lolita’ Island and the CIA works with it.”

This clearly shows why Israel can practically control the U.S. It means that the Israeli intelligence agency holds the weak point of about 70 percent of Congressmen. Their sex scenes with girls in the Lolita Island are filmed on video.

According to the article, many celebrities are described in a list of passengers on Epstein’s private jet ‘Lolita Express.’ Mr. and Mrs. Clinton and Prince Andrew are included in the list. The problem is that as I picked up on this blog a number of times, President Donald Trump seems to be included in the list. President Trump was sued by a girl, then 13 years of age, but subsequently the case was dismissed.

The military personnel who buck up President Trump, especially General Joseph Dunford at the top is as dubious as Pope Francis who leads the Vatican faction which compete power in the Trump administration. He is such a person whose past actions can be easily imagined. In a word, relatively gray people fight against darker people. This is an internal conflict among those who try to bring light to the world.

Seeing such situation, it seems that Earth has no future. However, I have a feeling that everything is going smoothly.

English translation of an excerpt from a Japanese article: TOCANA – July 23, 2017- 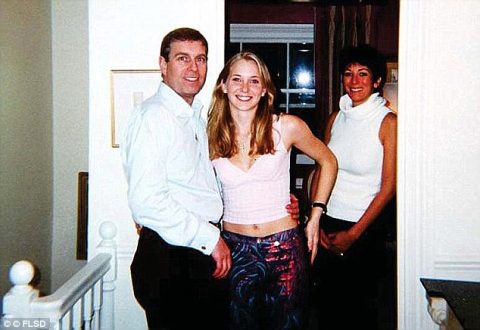 Epstein, left, and Virginia Roberts, center, one of victims who accuse him
From article of Daily Mail

Stunning celebrities are described in a Lolita Express passenger list. To begin with, the name of Bill Clinton is described. His name was described in the list as often as 26 times.

Naomi Campbell, a model, Kevin Spacey, an Academy Award winner for Best Actor, Britain prince Andrew, Larry Summers, former U.S. Secretary of the Treasury, and many famous politicians are included in the list. Incumbent U.S. President Donald Trump also socializes with Epstein. The president was sued in charge of having raped a 13-year-old girl in a number of elite sex parties but subsequently he was acquitted of the charge.