Why was U.S. missile attack on Syria carried out? – Ivanka deluded by Dark Forces –

image: 1
Why was U.S. missile attack on Syria carried out? – Ivanka deluded by Dark Forces –
I can see vaguely, though not fully, see what really happened. According to Sakurai Journal, CIA director and Director of National Intelligence are not seen in a photo where the U.S. government tope officials are watching the U.S. missile attack on a Syrian airbase. CIA Director Mike Pompeo had explained to President Trump that President Assad was not likely to be responsible for the chemical weapon terrorism on April 4. If so, it turns out that President Trump assembled only people who provided information he wanted to hear.

According to Sakurai Journal, Assistant to the President for National Security Affairs H.R. McMaster provided fake information to President Trump. I think it is exactly true. I suppose that it was McMaster, Ivanka and her husband Kushner who greatly influenced President Trump on the missile attack on Syrian airbase.

According to Sakurai Journal, McMaster is introduced as a neocon. I have a slightly different viewpoint. I think that Mr. McMaster, like Mr. Tillerson, acts under the direction of Mr. Kissinger. On the other hand, Secretary of State Tillerson says: “Washington’s plan is to defeat ISIS, not to bring regime change to Syria.” If my viewpoint is not wrong, I think that Mr. Tillerson and Mr. McMaster have no thought of overthrow of the Syrian government. Mr. Kissinger’s agenda is absolutely directed at North Korea.

On the other hand, Israel lobbied President Trump through his son-in-law Kushner and planned to cause a war in the Middle East and topple the Assad regime. President Trump’s daughter Ivanka exerted a decisive influence on him. If my viewpoint is not wrong, it is possible that Ivanka received fake message from the dark forces, specifically, Kimera group and misunderstood it as divine message.

The fourth article shows that “Ivanka” is a person who has “a significant influence on the White House.” I think that when President Trump makes a final decision on something, Ivanka’s advice will have a decisive influence on it. As I commented many times, that’s because she has channeling ability. She seems to have been completely deluded by the dark forces this time.

When this article is posted, I think that she will recognize her misstep. However, she and her husband Kushner have been dragged into Darkness at present.

Note:
Shanti-phula has indicated some parts of the following text in black boldface or in red letters.

The U.S. military launched Tomahawk cruise missile attack on a Syrian government airfield on April 7. A photo showing Donald Trump and government top officials watching the attack has been released. It makes the news that somebody and somebody glare at each other. However, something important seems to be hidden in this photo. In other words, why are not CIA Director Mike Pompeo and Director of National Intelligence Dan Coats present seen in the photo? 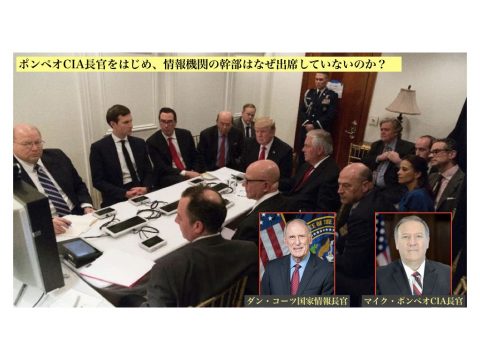 "Why are CIA Director Pompeo and other intelligence top official not present?"

According to Robert Parry, a journalist who was famous for exposing CIA involvement in Contra drug trafficking, his information source says: on April 6 CIA Director Mike Pompeo explained to President Trump that based on evaluation by the Directorate of Analysis, President Bashar al-Assad was not likely to be responsible for release of lethal poison gas to the air. Although he had known the information, President Trump ordered an attack on Syria, which might cause a nuclear war against Russia.

Assistant to the President for National Security Affairs H.R. McMaster manipulates President Trump with information made convenient to neocons

President Trump ignored the information provided by CIA Directorate of Analysis and started direct military invention in Syria. It seems that Assistant to the President for National Security Affairs H.R. McMaster provided fake information to Trump. 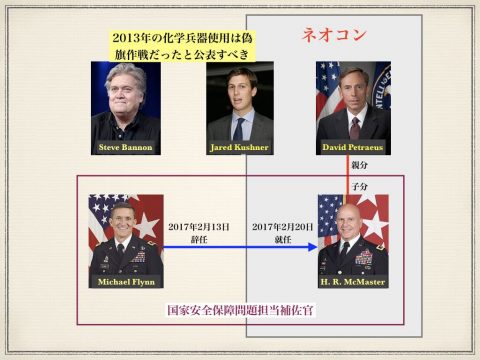 Steve Bannon, Jared Kushner:
"It has to be released that the Syrian use of chemical weapons in 2013 was a false flag operation."

* Assistant to the President for National Security Affairs

According to a report on RT, Secretary of State Tillerson has on CBS backed away from his previously reported aggressive rhetoric reported by the presstitutes against Russia and Syria.
https://www.rt.com/usa/384142-tillerson-syria-regime-change-isis/

According to the RT report, Tillerson said that Washington’s plan is to defeat ISIS, not to bring regime change to Syria. It is up to the Syrian people, Tillerson reportedly said, to choose their own president. Tillerson said on CBS that “We’ve seen what violent regime change looks like in Libya and the kind of chaos that can be unleashed and indeed the kind of misery that it enacts on its own people,” he said on CBS. “I think we have to learn the lessons of the past,” he emphasized on ABC, adding, “Any time you go on and have a violent change at the top, it is very difficult to create the conditions for stability longer term.”

If the report is correct, it could either be good news or another Washington deception in advance of Tillerson’s visit to Moscow, the purpose of which will be to bring the Russian government into Washington’s orbit and an agreement to replace Assad with an American vassal.

Decision of the U.S. leadership on a missile attack on Syria was influenced by President Trump’s daughter Ivanka’s response to the information on use of chemical weapons in northern Syria Idlib. The Independent quoted a source familiar with a diplomatic message of the U.K. ambassador to U.S. as saying so.

According to the Independent, UK ambassador to US Kim Darroch sent a message, which predicts that U.S. is studying the possibility of military action in Syria, to Prime Minister Theresa May and Foreign Secretary Boris Johnson one day before the U.S. carried out missile attack on Syria.

The message reportedly included an explanation why President Trump changed his stance on Syria.

According to sources, Ambassador Darroch pointed the influence of President Trump’s daughter Ivanka in an official document.

The Independent reported: “Sources familiar with diplomatic messages said that Ivanka’s concern exercised a significant influence on the White House.”

Ministers were told it meant the administration’s reaction was “stronger than expected”.

U.S. President’s son-in-law is the culprit of U.S. attack on Syria

Zionist-affiliated media disclosed that U.S. President Trump’s son-in-law, a supporter of Zionism, had encouraged the U.S. government to carry out an attack on Syria.

According to a Lebanese TV Al-Manar, the Zionist media also says: “Israel sent information to the U.S., which facilitated the U.S. missile attack on Syria which was carried out on 7, Friday.”

A political expert of Israel 2-channel also said: “The U.S. and Israel cooperated with each other in attack on Syria and the U.S. had made contact with the Department of the Israeli Army General Staff several times before the attack.”