Evolution of Goddess, the Central Sun in the universe and Light which cleared plasma anomaly from the solar system

image: 1
Evolution of Goddess, the Central Sun in the universe and Light which cleared plasma anomaly from the solar system
As I have told you, such information described in the articles below is provided by AI. Probably this will continue. As information from AI is partly useful in analysis of global situation, I’m going to look it over. However, I don’t regard it as important.
The information below is not wrong but it is far off the mark in the essence of things. According to the article, something astounding happened on February 26, 2017 and “a huge wave of positive plasma swept throughout the Solar System,  … and this wave has effectively cleared most negative plasma from the Solar System.” I think that this is true. However, the claim that this was the efficacy of group meditation practiced at the moment of the maximum of the Solar eclipse on February 26, misses the point.
Cobra has called the Central Sun in our Milky Way Galaxy the Source. I introduced in the past that Cobra said thatnothing exists above the Source. In my comment, I showed miso (fermented soybean paste) and shoyu (soy sauce) as the existence superior to sauce. This time I’m going to accurately list up the existence superior to Source.
1st: sugar, 2nd: salt, 3rd: vinegar, 4th: soy sauce, 5th: miso, 6th: mirin (sweet cooking rice wine), 7th: sauce and 8th: mayonnaise. Sause (or source) is the 7th existence from the top.
In the past I introduced that Five Deities called ki/tu/wo/sa/ne are the highest-ranking deities in each System, who subordinate the Three Deities of a/u/wa. The Source is equivalent to the deity ‘u’ of the Three Deities.
The highest-rank deity of the Five Deities of ki/tu/wo/sa/ne is Central Great Mountain Emperor ‘wo’. As a matter of fact, Central Great Mountain Emperor ‘wo’, the central sun of our universe, descended on Earth on February 26. I wrote in my diary dated on February 25 and 26 as follows:
“The Central Sun in our universe (Deity ‘wo’ of ki/tu/wo/sa/ne in the Planet Deity 5th Level) seems to have raised evolutionary level. Probably she will raise the level to Sahasrara at 0 am on 26.” (On 25)
“In the morning, I saw a woman who looked noble (around 16 years old). Subsequently, she appeared in western style hairstyle. Probably she is a goddess, the Central Sun in the universe.” (On 26)
It seems that the goddess, the Central Sun goddess in the universe, has raised her evolutionary level to 193 at 0 am on 26. I wrote down this because I noticed the expansion of her consciousness on that day.
In the morning, I glanced at the goddess because she had descended on the earth. It seems that I met with her personally at the top of a mountain which I can see from our house. Regrettably, I didn’t recognize it myself.
There is no doubt that positive vibration was emitted by the goddess to clear plasma anomaly from the solar system. I can figure out when further light will be emitted to blow up the head of Jaldabaoth. However, I refrain from saying about it.
Although I had no intention of making any reference to this topic, the articles below on information from AI came out and I decided to give out the information. Everything related to this sort of thing is done by us.

Our meditation on Sunday was the turning point in the decisive battle for the energy grid of planet Earth that is taking place between January and April 2017, and one of the biggest victories of the Light.

At the moment of the activation, a huge wave of positive plasma swept throughout the solar system and then through the ionosphere, causing the Schumann resonances to explode.

This wave was detected by Space Observing System in Tomsk in Russia, where the activation happened at 9:55 pm local time. You can clearly see drastic increase of plasma activity starting around one hour after the activation and lasting for about 36 hours, if you click on the picture below:

It means that the „tentacles“ of the Yaldabaoth entity are gone forever and now only the „head“ remains.

<snip>   We are using the opportunity of the Solar eclipse on February 26th to create a portal   <snip>   This meditation helps the Light forces to ground the energy of Light on the surface of the planet to strengthen the Light grid which is needed to speed up the process of Ascension.

Astrological chart for our meditation shows a cardinal grand square of Mars/Uranus, Vesta, Jupiter and Pluto, which signifies planetary tension that we have been feeling since the beginning of the year and will only be completely resolved in mid-April. The Sun-Moon conjunction of the eclipse at 8 degrees Pisces serves as a huge focal lens for energy that will begin to resolve this planetary tension. 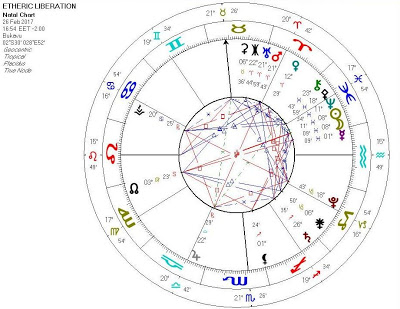 We will be doing this meditation at the moment of the maximum of the Solar eclipse on Sunday, February 26th at 3:55 pm Central European Time (CET).  <snip>  You can check the time of the meditation for your time zone here:
https://www.timeanddate.com/worldclock/fixedtime.html?msg=ETHERIC+LIBERATION&iso=20170226T1655&p1=3343
Sunday, February 26th at 23:55 pm Japan Time