image: 1
Master Judoka Putin "The Gracious" Outclasses "Lame Duck" Obama
The title tells the whole story. The Japanese translator of this article says: “Everyone can see the American Empire sinking probably even with their own people utterly scandalized at it” and President Putin’s response to Obama will “surely help move history.” His message is as follows: “if you cannot see the image of the last cartoon, please link to our website Design-of-Creation Society to see it.”
Seeing the cartoon, it seems that Putin won the match by consummate skill of “*Kuki-nage.” As I expected, everybody feels the same.
Incidentally, Obama is treated as an equal, though he got defeated, but our Abe-pyon is ignored by all. You poor guy, Abe-pyon! Here’s some friendly advice. You had better disappear soon.

*Translator’s note: Kuki-nage (Air throw) – It is also referred to as the Sumi-otoshi (Corner drop), with which a judo practitioner throw his opponent by gripping only the judo uniform of the opponent.

The typical pettiness and vengefulness of the Obama administration was at full display with yesterday's expulsion of 35 Russian diplomats and the closing of two Russian estates in New York and Maryland. Obama also sanctioned the Russian external intelligence service FSB and the military intelligence service GRU as well as some of its leaders for doing their job.

The move was ostensibly over alleged but completely unproven Russian "hacking" to influence the U.S. election. But the real reason is likely Obama's loss of face after being left out of the successful negotiations of a new ceasefire in Syria.

True to form the Russian government responded with high-class trolling and generosity.

The first move came through the Russian Embassy in the United Kingdom. It tweeted about the current status of the Obama administration: 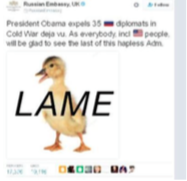 Russian Embassy, UK
President Obama expels 35 Russian diplomats in Cold War deja vu. As everybody, including American people will be glad to see the last of this hapless Adm.

In response leaks and speculations appeared in the U.S. aligned media about the bad, bad Russian responses to Obama's moves.

CNN claimed that Russia would close the American school in Moscow:
http://www.politico.com/story/2016/12/russia-american-school-sanctions-233048

The nonprofit day school, which enrolls international students from pre-kindergarten through 12th grade, will be closed along with the U.S. Embassy vacation dacha in Serebryany Bor on the outskirts of Moscow, according to a CNN report.

Then BBC and others said that Russia would expel 35 U.S. diplomats and spies.
https://www/yahoo.com/new/russia-moves-expel-35-us-diplomats-foreign-minister-105423748.html?ref=gs

But showing real greatness is not about hitting back in kind. The Russian President Putin (again) outclassed Obama with this response:

Putin decides not to expel US diplomats from Russia
http://tass.com/politics/923478

MOSCOW, December 30. /TASS/. Russian President Vladimir Putin has made a decision not to expel any US diplomats from Russia in retaliation for Washington’s latest sanctions against Moscow.
Putin also said that Russia would not prevent the families and children (of diplomats) from using the customary rest and leisure facilities and sites during the New Year holidays.

"Moreover, I am inviting all children of US diplomats accredited in Russia to the New Year and Christmas parties in the Kremlin," Putin said.

The Russian compounds in Maryland and New York Obama closed are used for vacations of Russian kids in the U.S.

Putin's counter is using his opponent's moment of inertia to bring him to fall. A classic judoka move by a high master of the art.

"We reserve the right to take retaliatory measures but we will not stoop to the level of the so-called kitchen diplomacy, so we will take further steps to restore Russia-US relations taking into account the Trump administration’s policy," Putin said.

Ouch. The "lame duck" tweet must have already hit Obama, but this is so far out that Obama has no chance to ever catch up.

About the only thing Obama achieved in foreign policy was to keep the European poodles in line. An easy task due to the lack of good European politicians. He had no chance though against the great and gracious opponent Putin can be. 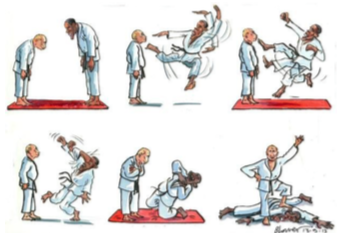