image: 1 & 2
“Immature water” and “Mature water” – Viktor Schauberger’s basic idea on water –
The article below introduces a distilled water purifier for household use, which turns salty sea water into drinking water. Distilled water does not contain mineral and becomes “immature water.” Viktor Schauberger has basic idea that immature water deprives and mature water gives. In a word, if drinking only distilled water, humans are deprived of life energy, and as a result, they easily get sick. Distilled water is very inappropriate as drinking water.
I can cite fruit wine as a similar case. It is better to use as cheaper distilled spirit as possible to make fruit wine. It is layman’s view that fruit wine tastes better when fruit is soaked in expensive wine or Japanese sake. As a matter of fact, as cheaper wine or distilled spirit is immature as alcohol, such alcohol can extract a lot of essence of fruit from it. There is a good reason why we use cheaper alcohol to make fruit wine.
Like cheaper alcohol, immature water makes people sick. On the other hand, spring water containing a lot of mineral is said to make people healthy.
According to Schauberger, however, they say that water gets dead by running through water pipe. Water loses most of life energy when running through water pipe. However, they say that life energy of water is revitalized if you put a groove inside of the water piper in clockwise.

Thinking of our health, I am not alone in wanting such water pipe though slightly expensive.

I wonder if there is somebody who will follow in the footsteps of Schauberger and make an apparatus or water pipe which makes wonderful water.

Note:
Shanti-phula indicates some of the following text in black boldface type or in red letters.

Excerpt from a Japanese article: News onthe Other Side of the World – August 28, 2016 –
Apparatus to make distilled water with the use of solar heat and salty water 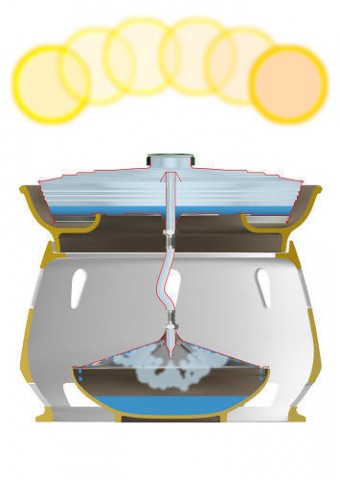 The distilled water purifier invented by Mr. Diamanti, Eliodomestico, functions very simply. It functions by filling the black boiler with salty sea water in the morning, then tightening the cap. As the temperature and pressure grows, steam is forced downwards through a connection pipe and collects in the lid, which acts as a condenser, turning the steam into fresh water.

And while solar stills aren’t a totally new concept, Diamanti says it’s rare to find them in a domestic context rather than in missions or hospitals, or as large plants overseen by qualified personnel that serve entire communities. “I tried to make something for a real household that could be operated directly by the families,” he says.

The project recently won a Core77 Design Award for SocialImpact.