image: Source
Mass Media values the friendship between Putin and Netanyahu as a model for male politician friendship. – Photos of dead ringer for Netanyahu and dead ringer for Putin –
I have posted an article before that Israeli defense minister Yaalon “made a statement criticizing Turkey for having deals with terrorists.”  I suppose that seeing the change in global situation, Israel has begun to keep its distance from ISIS.
The article reads that “Russia and Israel has been continuing negotiations at the highest level since Russia started its military operations in Syria” and that Israeli Prime Minister Netanyahu and President Putin establish a true friendship.
I have commented before that Netanyahu we see is his dead ringer and yet a spy for Russia. I still think that it is true. I suppose that real Netanyahu has already died. These two photos are those of dead ringers for Netanyahu and Putin.

(Note)
Shanti-phula has indicated some parts of the following text in black bold style or in red letters.

Mass Media values the friendship between Putin and Netanyahu as a model for male politician friendship. 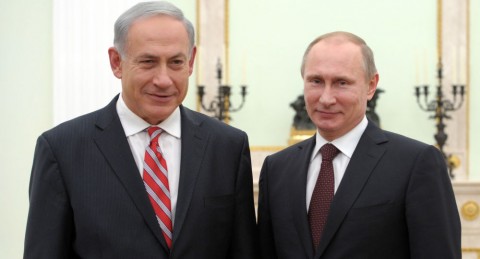 German quality paper “Del Tagesspiegel” values that the relationship between President Putin and Israeli Prime Minister Netanyahu is a “model for male friendship”. The paper points out that the two heads of states display how politicians should be by showing mutual respect in spite of a discrepancy in opinion which are often seen.

Although real friendships can hardly been seen in political world where big money moves and national interests swirl, it is possible to build the common policy and avoid collision by developing the same concept of values and sense of affinity. The Del Tagesspiegel cited the relationship between President Putin and Prime Minister Netanyahu as a good example.
Although they had several discrepancies in opinion, the two heads of states have built mutually supportive relationship over the Syria issue. Russia and Israel has continued negotiations at the highest level since Russia started its military operations in Syria.