image: Source
Cosmic Disclosure: The Dark Fleet –A Draco Royal Mr. Corey Goode Met
This is an interesting and easy-to-understand article with illustrations. Mr. Corey Goode says that he met a Draco royal. How he met the Draco royal is described in the illustration below. The Draco looks exactly the same as channeling-related rumor says. As Cobra mentions, Draconians or reptilians appear something like a reptile in inside entity (existence) and they look like ordinary people in physical body.
The Draco royal Mr. Corey Goode met is its etheric double, not physical body. This person’s etheric double and Mayavirupa (plasma body) have been destroyed and his physical body alone exists.
In the latter half of the article, you see that since the Sphere Alliance erected the outer barrier, the Dark Fleet and Draco Alliance fleet which were performing their duties outside the solar system were not able to come back to the solar system. I suppose that every spaceship of these fleets have been destroyed.
David mentions in the last sentence that the Draco had a very cast AI system that was “monitoring the consciousness of everyone on Earth.” I think that this AI system is to be destroyed when this article is posted. Therefore, there is nothing to worry about.
Reading some of Cobra information, you will see that the Resistance Group and cosmic friends are working together to totally destroy the Dark forces.

(Note)
Shanti-phula has indicated some parts of the following text in black bold type or in red letters. 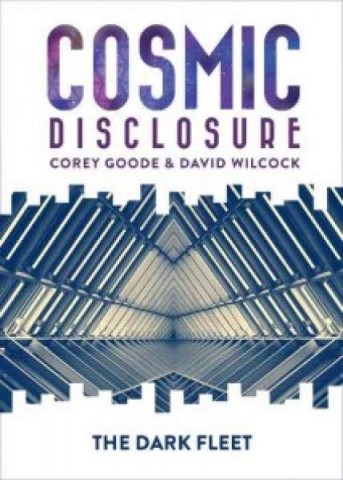 David: You mentioned that there was a group called Solar Warden, which was the first real faction of the space program, and they acted sort of like the interplanetary police force . . .
. . . tracking any unauthorized entry or exits. You also mentioned the Interplanetary Corporate Conglomerate (ICC) is another faction that arose out of the military defense contractors.  *snip*  You also mentioned a military faction, the Dark Fleet. Now, what is it about the Dark Fleet that earns the name “dark”?
Corey: A number of reasons. *snip* Well, in Black Ops, when there is a dark program, it is completely compartmentalized to where no one receives any intelligence. The other Secret Space Programs received very little information about *snip*, what they were doing, what they were up to. *snip* Their bases were completely autonomous. Other Secret Space Programs did not get to go to their bases. Their craft were of a different design usually. *snip*  One of them is a very large wedge-shaped that is very much like Star Wars – the Destroyers, I guess, very much like those, but they're a little bit more sleek. *snip* There's also a very large diamond-shaped vessel that they have. *snip* They have a very large pumpkin seed-shaped vessel. 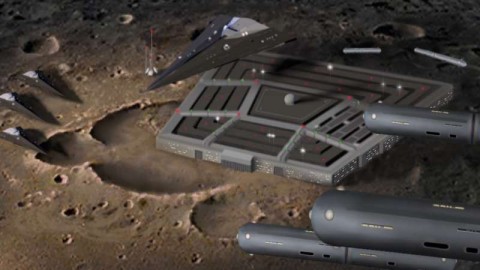 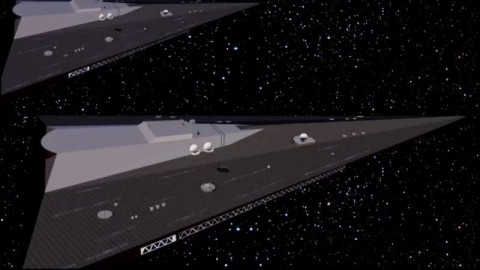 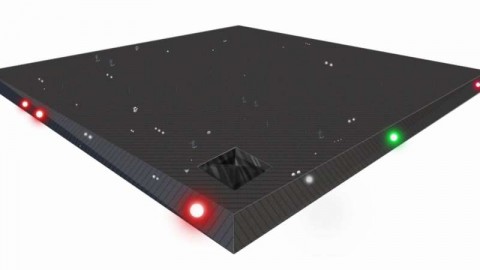 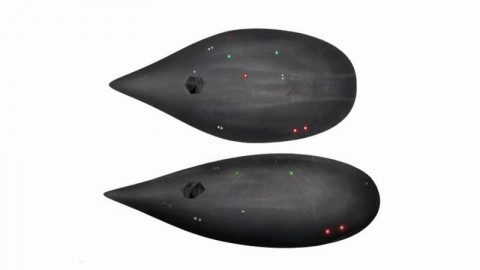 David: When you say 'very large', now, what are we talking?
Corey: Over 600 feet [183 meters] across. *snip*  But those are smaller than the large wedge-shaped vessels. *snip* . . . They're an offensive force. They are for going and doing offensive type of work alongside the Draco. They go outside the solar system on, I guess, conquests or defending Draco territory, helping the Draco on military expeditions.
David: Let's go into the Draco. *snip*

Corey: There are a wide range of different types of reptilian beings that are involved with this Draco Alliance, but there are also some insectoid-type beings that are involved in this alliance and some very strange Nordic-type beings. There's been a little bit of information that they are a conquered race that was forced into servitude, but that are also a part of this federation.
*snip*
They have different castes within their system. They have like a warrior caste. They have engineers, scientists, almost like a hive. And then they have their royalty up at the top that control and direct everything. *snip* Well, I met, unfortunately, a Draco royal. *snip*  This one was around the 14 foot [4.26M] range, which is incredibly tall. They are incredibly muscular. *snip*  Very reptile looking, had vestigial wings and a vestigial short tail.
*snip* When it was interfacing with me, its eyes were morphing the whole time. It was a very psychically powerful being. *snip* As we found out later on, it turns out that a lot of these reptilian higher castes are highly infected with nanites – artificial intelligence-type of nanites. 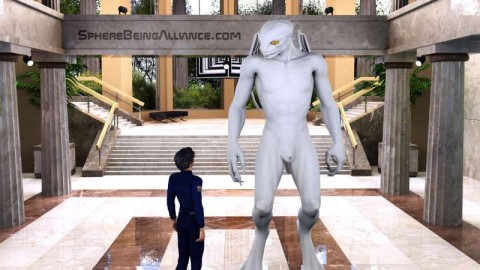 David: And you said they worship the AI as their god.
Corey: That may not . . . They may be working parallel with, but they have an overlord. I'm not sure exactly what that is.  *snip*  So this group is working alongside a human group  *snip*  they spend almost all of their time completely outside the solar system. And we knew of . . . There's one of their bases on the moon that is quite a ways from the Lunar Operation Command that is shaped like a pyramid with the top chopped off.
David: Yeah, and you have an illustration of that we can bring up here. 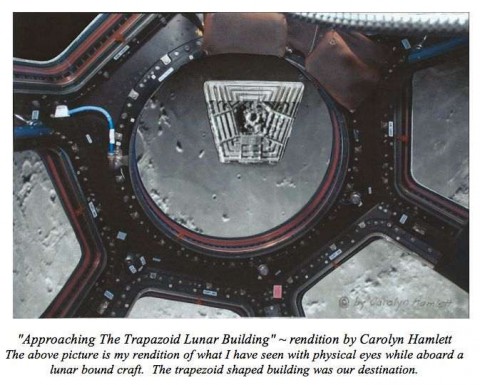 Corey: That's not my illustration. She needs full credit for this image. She had been abducted and taken to this facility. I was very surprised when people wrote me, and someone else had described this same facility on the moon.
*snip*

David: So what is the role of the Dark Fleet with regards to the Draco? What are they doing? Do the Draco run these ships themselves? Are they the pilots?
Corey: No. And I've seen a little bit of misunderstanding about this. The Draco have their own vessels.  *snip*  The Dark Fleet is completely human ran. They do answer to and work alongside the Draco Alliance. They're allies, and they go out and they do offensive battles and offensive expeditions together outside the solar system.  *snip*  And there's been a few defectors from the Dark Fleet that were stuck inside of the outer barrier that was erected.  *snip* Command control and communications were still here, and a lot of their operational forces were outside doing what they do when this outer barrier was raised. So they became stuck outside of this field around our entire solar system that is way, way out past where the heliosphere is - out past the Oort cloud. It's huge. And they can't come back. *snip* So the structure that was here has somewhat been cannibalized into the ICC and defected to the Alliance. 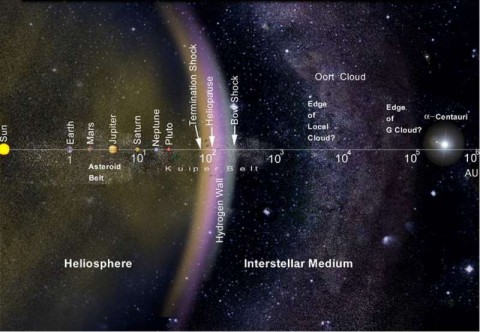 David: You mentioned this before, but let's go over it again. If you saw somebody from the Dark Fleet, what are they going to be dressed in? What do they look like?
Corey: They were very distinctive. A lot of the times they usually . . . It's almost out of Star Wars again. They wore . . . They had a very . . . They looked very stern, very arrogant. *snip*  And a lot of the people came from a lot of the German secret society Nazi kind of programs.
*snip*
David: One of the things that I heard from the other space program insider, who we could call Jacob, was that . . . and this is going to be hard for people to accept. *snip* He said that the Draco had a very vast AI system that was monitoring the consciousness of everyone on Earth. So that if we start thinking in the direction that they don't want us to think, that we'll start feeling tired, exhausted. We'll get distracted. We'll want to do something else. *snip* And that everybody has what they call a “file”, which is the electronic record of all the thoughts and how these various strategies work. It is to store the files. *snip* And, apparently, it was not just the files for people on Earth, but the Draco were storing files on several other planets in our vicinity.  *snip*  I've sat with Jacob and with Pete Peterson. I've asked these guys certain questions, and they will literally pass out in the middle of answering the question. They lose consciousness.  *snip*
Corey: This also has to do if you have an AI signal infection. *snip*  So they have ways of managing people that they can't totally shut up or blank slate their memories.


(The rest is omitted. Please refer to the above source.)
Posted by Shanti Phula at 4:17 AM