image: Source
Ending the Contract System – Exposition of what is referred to as “Seven Planes and Forty-nine sub-planes of Solar System” by Theosophy
Cobra information has detailed exposition of what is called by Theosophy as “seven planes and forty-nine sub-planes of solar system”. Since it is very important information, I asked Ruka to translate it into Japanese. She has excellently translated it. I think that what is written in the article is mostly right.
Thanks to this article, I have finally got a clear understanding of which realms the plasma planes called by Cobra refer to. I gave a wrong explanation in the past and I’d like to do a correction here. What is referred to as plasma body by Cobra means the Mayavirupa.
As for the plane table shown in the graphic below, I’m going to explain it in online lecture on “Theosophy” someday.

One of the major tool of the Earth prison system has been to manipulate people to get their free will agreement on their own enslavement. This can be easily seen with mass media manipulations, however there is a deeper and more important layer to this, which is all the contracts that have been signed by the people over the many thousands of years in the Earth prison system.

When we die, we dot not automatically ascend, have all our issues solved magically, merge with our Soul/Spirit, and get out of the Earth prison. What happens instead is we cross over to the the density above us. Densities are states of matter, the most dense being solid matter, then liquid, then gas, then plasma, etheric, astral, etc, as shown in the graphic below : 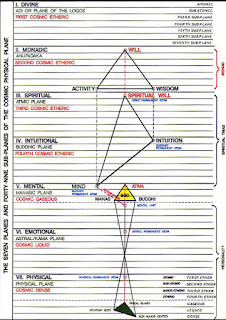 It's important to understand that even when we are incarnated in a physical body, we still have plasma, etheric and astral bodies (and also all the planes above), connected to our physical body. There is always communication between the planes : something happening on the liquid plane can affect the solid plane, same with plasma, etheric, astral, etc.

The veil, the electro-magnetic fence surrounding planet Earth, exists on physical, plasma, etheric, astral and lower mental planes simultaneously. It has been blocking the vast majority of people from going in and out of the Earth. The Soul/Spirit itself is not trapped but its incarnations are.

When we die, our consciousness is removed from the physical world ('dense liquid and gaseous') and moves up the planes to the etheric and astral. What happens then depends on the choices, circumstances and consciousness of the people.

The movie Nosso Lar is based on a real story as it was told to the medium Chico Xavier, who was famous in Brazil for helping people communicate with their deceased loved ones, giving them details about their private lives that he couldn't have known without being psychic. In this movie we follow the story of a doctor who dies and finds himself on the etheric and astral planes.
After dying, he wakes up in a totally dark, desolated and horrible world, where people have no ressources and constantly re-act negative patterns. 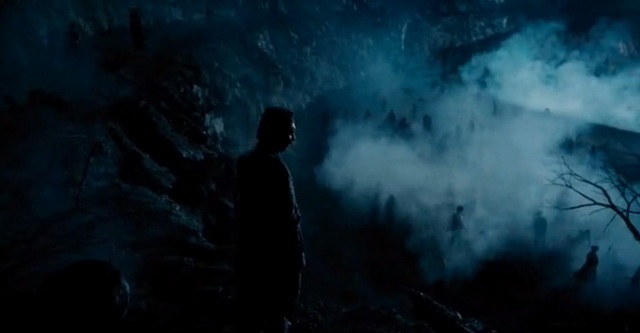 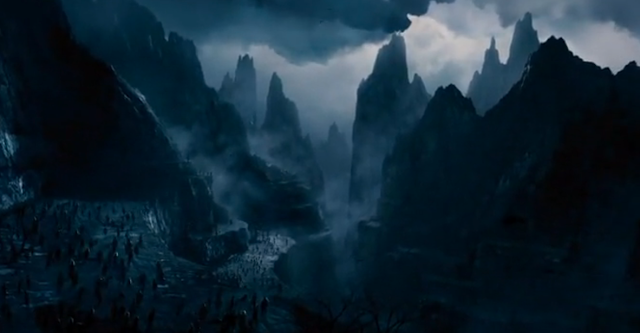 This is the plasma and etheric plane, in the state most of it has been during prison Earth.

He searches and finds no grace there, until he is at the end of his rope and prays to the divine for help. Help comes and he is rescued by people surrounded with an aura of Light. 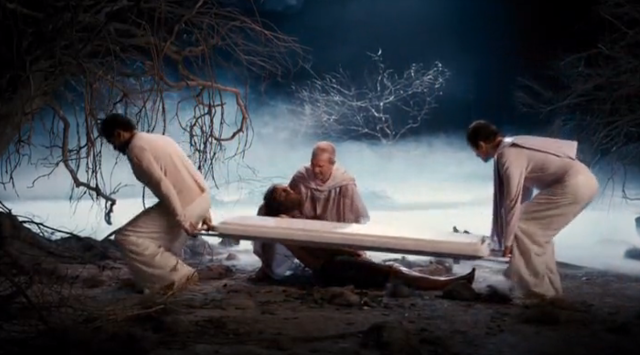 They bring him to a beautiful city : 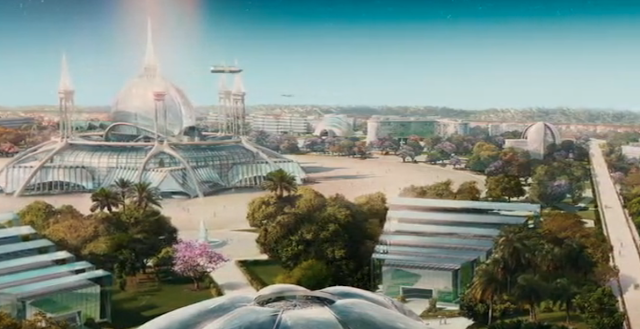 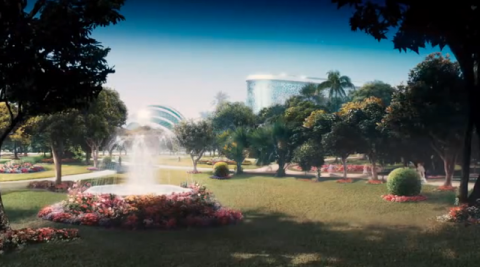 Cobra has spoken about these cities :

"Actually on the higher astral planes there are areas of Light where people can go after they die if they have high enough vibrational frequency. They have beautiful landscapes, beautiful buildings, beautiful surroundings. But they are still tied to the quarantine Earth, sooner or later they have to come back and reincarnate, because the archons still have control over them."

We see this control system clearly in the movie. The city is surrounded by walls: 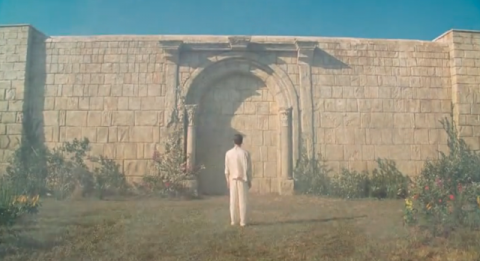 And people are not able to go out, they are strongly discouraged to do so, and if they do, they come back wounded. The whole structure and hierarchy of the city gets people to reincarnate, it is actually the only option offered to people. There is never any mention of moving to a different planet, or even staying on the astral plane. People who try to find a different option are rather shamed and considered »unspiritual« for »not surrendering to the divine plan«.

Again, Cobra has described this situation :

"It's also that guides of the Light forces are manipulated by the archons on the etheric plane, and they generally want to do good but they are brainwashed, same as spiritual teachers on the physical plane, it is quite similar."

It is also quite similar to what we can see in the medical system on the physical plane. Many hospital personels are well-intended yet they are brainwashed to poison people daily.

In these astral cities, people are told that in order to resolve their personal issues and progress spiritually they have to reincarnate and make a specific reincarnation plan to re-act these issues. This plan is a contract, stating that they accept to forget everything during the rebirth process, and that they accept to suffer during the next life. This is based on false karma teachings, which I have explained in a previous article :

"A lot of programming has been created by archons to justify evil. For example the laws of karma, which state that for example, if i broke my friend's bowl, then the universe will send somebody to break my bowl in order to teach me the consequences of my actions. This means that the universe will then send somebody to break the bowl of whoever broke my bowl, etc. This is totally made up and has nothing to do with true universal law, simply because if it did, nothing would ever resolve and suffering would just escalade forever. The true universal law is forgiveness and grace and this is what has been taught by the teachers who had a true connection. The will of Source is that if somebody does something hurtful, they should receive adequate healing in order for them to embody their true self again. Some re-balancing of the energy between the people involved might be needed, for example whoever broke the bowl can buy another bowl for its owner, or repair it, or do some other kind of service to compensate energetically. Or the owner of the bowl could simply forgive and the infinite abundance of Source would re-balance things automatically somehow, not by taking anything away from whoever broke the bowl, but by providing both of them with whatever is needed. Resources and abundance are unlimited."
http://recreatingbalance1.blogspot.com/2015/02/contingency.html

There are many other contracts that people in prison Earth have signed. First in late Atlantis, many humans (not star seeds) were tricked and promised wealth and power by the dark forces in exchange for implantation and signing contracts with them. Then when the conflicts on the planet were so strong that the Light forces retreated, the dark established prison Earth with a border around the planet, stopping everybody from going in and out. Everybody inside the veil was forced to sign contracts with the dark, that they accept to suffer, that they accept the dark forces conditions, that they will not receive help from Light forces, etc.

Then in our modern life, a lot of contracts and agreements were made with the cabal. The main one is the birth certificate, which is actually a property title owned by the government, stating they have copyright on the birth name, and therefore they own everything registered under this name. This is why everywhere in the world it is not possible to aquire your birth certificate, people can only get copies of extracts of it.

The point of all of these contracts is energetic, having people's signature gives energy to fuel the dark forces to manifest what they want.
The solution to remove these contracts is also energetic. We are sovereign beings of Light, incarnations of Source. Source's will is the most powerful force in creation, and it wants us free. We are not bound by whatever insane contracts that are disconnected from Source. By stating our free will to revoke these contracts we can free ourselves from them. It does not get us out of prison Earth instantly because free will is not fully respected here, but it does increase the flow of Light in our energy field and helps protect us to a good degree.

In a previous Cobra conference, he has shared with us a contract cancellation that I will share here. He advised us to write down this text, fully join our intention to it, declare it out loud, and keep the paper with us.

I am a free sovereign being of light, from now until eternity.

I highly recommend everybody to do this, it creates very powerful positive shifts for us personally, and the more people do it, the less fuel the dark forces will have to maintain prison Earth, the faster the Event and full liberation for all will come.

Victory of the Light ! 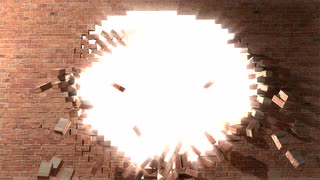