image: Source
Cosmic Disclosure: Season1, Episodes 1& 2 Message for Humanity/First Encounter – Sphere Federation Council Mr. Corey Goode Attended –
I have summarized Season 1, Episodes 1 and 2 of Cosmic Disclosure. The report is compressed so that you can understand the story more easily. If you are interested, please read the original report.
The report describes that Mr. Corey Goode was chosen as delegate for the Blue Avians of the Sphere Alliance, the most advanced organization in the Galaxy and he attended the Special Federation Council in the LOC (Lunar Opertaion Command), a facility on the back side of the moon.  The Blue Avians suddenly appeared in the Council meeting and gave a message to the participants through Mr. Corey Goode. The part described in red boldface (Episode 2) is important. It is the same message as what I have repeatedly conveyed to you through video lectures and others. And this is “the opposite of what the elite believe.”
Reading around the end of report (Episode 2), you see that the Sphere Alliance does not allow military strikes and that “full disclosure is what they’re going for.”
This applies to not only the people on the surface of the earth but the subterranean humans and aliens get involved with the earth. Everything including what they have done is set to be disclosed. Anybody cannot be allowed to prevent such disclosure. It is a deadly sin to send a message under a false name or intentionally send false information for interruption. I give you a warning in advance that if you do such thing, karma will immediately return to you, your vibrations will decrease and the light being emitted from the galactic center will cause you to go spiritually bankrupt. I also warn you that anybody who ignores my warning and continues malicious acts will be executed.

DW : We are interviewing Corey Goode, age 45. And what he has done here is to come forward as an insider and share with me more information about what's really going on behind the scenes in the so-called secret government and secret military programs. And if you could really quickly give us an overview of your involvement with what this whole space program subject has been in your life.
CG : Okay. For me, it started at the age of six years old when I was brought into what is known as the MILAB, some pronounced it MILAB programs. I was identified as an intuitive empath.
And empathic, being that you have a strong emotional connection with others around you. You can feel what they're feeling and connect with them emotionally. And I was trained, and that was enhanced. I was around 12 or 13 years old, me and a few of the people that I was training with, being brought into a program. And this was a federation of a large amount of ET federations that met to discuss the grand experiment.
DW : What was this experiment? What were these ETs doing?
CG : There was a group of 40 human-looking ETs that were pretty much always present, and up to 60 at other times that were present. There were 22 genetic programs that were going on. And the earth delegates had been trying to become a part of this for a long time. And they were finally able to get a seat. And as the intuitive empaths, when we were sitting there, we didn't know what was going on.
DW : Why are they doing this?
CG : That I do not know. But a lot of it didn't - why would they try to mix all of their best genetics together, and then manipulate us and our civilization to keep us down?
DW : How long do you think this program has been in action for?
CG : Of the 22 different programs, they've been going on for different lengths of time. But the genetic manipulation of what we are has been going back at least 250,000 years.
DW : Could we stop them?
CG : I don't think so. I mean, this is something that we've just recently been able to beg to get a seat at their table, to be a part of the discussion.
DW : So would these be negative-oriented extraterrestrials?
CG : It depends on your point of view, because they see what they're doing as a positive thing.
DW : You mentioned on your website something called LOC. Could you tell us what that is?
CG : The Lunar Operation Command is a facility on the back side of the moon. There's some people that are stationed there and work there, but it's more of a way station. People are coming and going from it all the time to go to their further out into the solar system and beyond, to go out to other stations, other bases.
DW : On your website, you've mentioned that there are five factions within the secret space program.
CG : I'll start with the oldest, which is “Solar Warden”. They were started back in the late '70s, '80s. And then we have the ICC, the Interplanetary Corporate Conglomerate, which is corporations all over the world that have representatives in a super-corporate board that control the secret space program infrastructure that they have out in space, which is massive. We have Dark Fleet, which is a very secretive fleet that works mainly in the outside of the solar system. We have various BlackOps Military secret space programs that we put into one group. And then, we have this Global Galactic League Of Nations group to maintain this veil of secrecy about what was going on in outer space.
DW : What's the sequence of events that led to you becoming a whistle-blower ?
CG : I was contacted by an actual higher density ET group that has now been known as the Blue Avians.
DW : And avian means bird?
CG : They're eight feet tall. They're blue to indigo in color with feathers. They have a very human-looking torso, arms, hands, feet...
DW : So they're hominid. It's like a bird head on a human body?
CG : It's a real soft, flexible beak.
DW : And what is their agenda? What are they here for?
CG : We're moving into a part of the galaxy that is a very high energetic part of the galaxy that's going to change the density of our solar system and our local star cluster.
DW : Okay, and if we go into a different density, what are these Blue Avians telling you will happen to human life as we know it now?
CG : That we're going to go through a transformational experience that is going to change us on a consciousness level mainly. They are here with these giant spheres to help defuse these large tsunami energy-waves that are entering our solar system.
DW : So you've actually had in-person meetings with these Blue Avians?
CG : Yes. I had sat in as an intuitive empath support as a young teenager. (Photo)I met this Blue Avian named Raw-Tear-Eir. 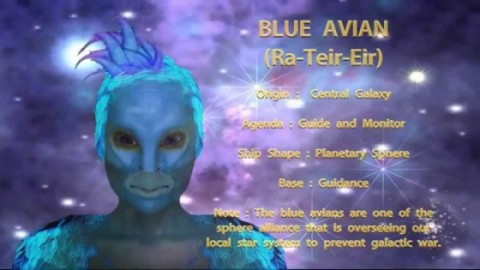 DW : Well disclosure would be a really key word there.
CG : Yes, full disclosure is what they’re going for.
DW : So these sphere beings are helping us get to disclosure?
CG : Right, that is the goal. They want for humanity to free themselves through disclosure and through us rising up and freeing ourselves. And hopefully - and it’s going to be messy, because a lot of people are going to be angry. There’s going to be some messy parts but they want us to do it in a way that’s going to be a foundation for a whole new era for humanity.
DW : Well this is a really fascinating subject, Corey. I applaud you for your courage and your bravery in coming forward and being willing to do this. And I think you’re a hero, and we all owe you a debt of gratitude. So thanks for being here, Corey.