Heavenly Message by Mrs. Seiko Nakanishi 6 Conversation with Pyramid of Khufu – It become possible to obtain almost all information since recorded history on the earth -

image: Source
Heavenly Message by Mrs. Seiko Nakanishi 6 Conversation with Pyramid of Khufu – It become possible to obtain almost all information since recorded history on the earth-

This is a sequel to yesterday’s article. Please read the first part posted yesterday, and you can understand this article more easily.
From the information obtained from a book coauthored by Mr. Graham Hancock and Mr. Robert Bauval, I thought the Pyramid of Khufu was built around 10,500 B.C. However, recently I have thought it was built in much older age. There is a lot of gibberish channeling information on earth history available. However, I feel nothing is the truth. I think only Mr. Alex Collier gives a fairly accurate exposition about it, but it cannot be said that it’s satisfactory enough.
However, this message has made me realize something very important; all I have to do is to ask the pyramid itself. The date when it was built would be determined. If I ask Mrs. Nakanishi to obtain information through interviewing with old stones all over the world that can be described as elders, almost all necessary information since recorded history on earth is available. I have realized the fact. If a pyramid is a king, a crystal can be said to be a secretary. Correct records of what is called official document in human world must be written down.
This will makes all dates known to us - when the Age of Lemria and that of Atlantic truly started and ended. I had difficulty in finding answers about it and I was at a loss about whom I should ask to. Therefore, this message has made me feel like finding a clue to the solution. 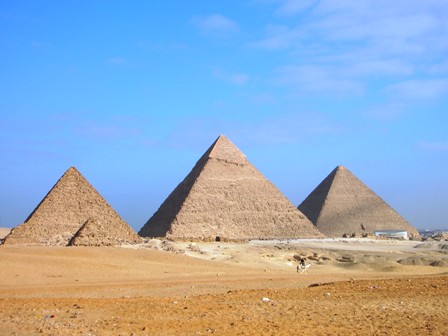 (Sequel to the first half)

Listening to the stories of the two, I was surprised to learn about their communication method and network.
A “stone” immediately reminds me of gigantic stone civilization. So I asked the following question to the stone.

Q: “I wonder if the leader of leaders among you, that is, king-like stone, is perhaps the three big pyramids in Giza, Egypt.”

A: “That’s right. The three pyramids of Giza are the “king” of us stones!
All information is recorded on each of the pyramid stones.
If you ask the three kings, everything can be taught by them.

What a surprise! All information is accumulated by the stones belonging to the Mineral System. They have an incredible network; information accumulated is transmitted from the three pyramids in Egypt as central hub to all stones or rocks all over the world, and transmission is all done not via electricity or electric waves like in the human world but via consciousness energy. I think it is the very miracle.
I’m also feeling curious about minerals other than stones. However, before that, I want to know about the network of trees in the Plant System, becausae I was moved and shocked by the story talked in online lecture on religious studies the other day, in which trees were expressed as “pillar of light.” As soon as I know about it, I’d like to let you know.

The following is the conversation with it.

I: What? You are Pyramid of Khufu?
I am honored to talk with you.

King: As a matter of fact, I have been waiting for you to get in contact with me.

I: Is there anything you want to convey to me?

King: No, there isn’t.
I have been waiting for you to recognize me.

I: I have been very often wanted to know about you, because I have been interested in you since I was young.

King: However, you have never talked to me personally. At last, I am very happy to have a chance to talk to you.
I’m willing to help you if there is anything I can do.
I’m going to tell about it to other two (Khafre’s Pyramid and Menkaure’s Pyramid). They must feel great joy.

He has waiting for me to detect him and talk to him.
It was another surprise to me. How insensitive and callous I have been! I have lived an easy life until reaching this age, completely unaware of the heart of silent beings.
I am terribly sorry. But I am happy to realize it now.
Thank you! I am really happy.


Seiko Nakanishi
Posted by Shanti Phula at 2:00 AM