This is a sequel to yesterday’s heavenly message. According to the message, a close friend of Kankuraishi, Itanbeish came from Toyosaka Town, Higashi Hiroshima City to Mrs. Nakanishi’s garden this time. It seems that we can go up to the mountaintop by car. However, you have to accept a risk of some exposure to significantly strong electromagnetic radiation because there are many radio towers on the top.
According to Heavenly Message 1, animals and plants have already started chanting Gayatri Mantra and Mantra of Love. This message says that rocks and stones have joined them to chant the mantras this time.
If you find a big rock near you, I would love you to call to the rock, ask for permission to touch it and feel the vibration with your attention focused on the heart. If you feel the same vibration that you feel after chanting Mantra of Love, the rock undoubtedly chants Mantra of Love.
I recommend that you do it. 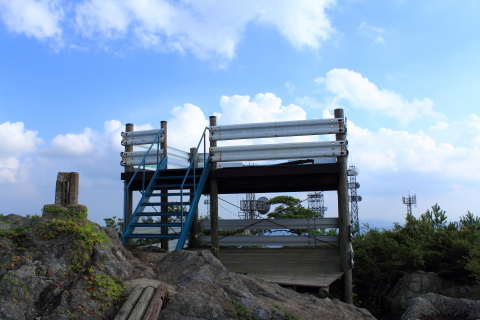 Observation deck on the top of Mt.Itanabe

“The other day, I told you that a fairy of rock called “Tsuyuishi (Kankuraishi)” on the top of Mt. Kannokura visited my garden. He assiduously chants Gayatri Mantra together with a fairy of small tomato “Tomako” every day.

Late at night yesterday, a close friend of “Kankuraishi” visited me and said that he wanted to talk with me. This morning I heard his story and wrote it down.

It seems to me that this story links to what you talked in the latest online lecture and I have decided to inform you about it.

First, a close friend of “Kankuraishi” is a big rock standing in the observation deck on the top of Mt. Itanabe located in Toyosaka Town, Higashi Hiroshima City. According to the rock, he came into existence approximately three billion years ago.
(There are two big rocks on the mountaintop. According to him, he is the rock which there is in the observation deck.)
Conversation with him is as follows:

“I: You have something to talk with me. What is it?

Itanabe: I was told by a deity to call at your house and help you together with Kankuraishi. He told me that I could understand what he said when I met Kankuraishi.

I: You met him.  Did you understand what a help referred to?

Itanabe: Yes, I understand.
It’s to chant “Gayatri Mantra” and “Mantra of Love” together with Kankuraishi and Tomako.
I heard from him that we should teach these two mantras to rocks and stone in the world.
If you give permission, we are going to convey to my friends in Japan by means of consciousness a message to chant two mantras.
Would you tell me what to do?

I: You have come all the way to meet me.
Would you and Kankuraishi get in contact with your friends, rocks and stones existing in the world to chant the two mantras together with you?

I: Don’t you want to go back to the place having an awesome view on Mt. Itanabe?

Itanabe: No, I don’t. I don’t feel comfortable in the observation deck where there are many antennas and towers and sometimes many people climb. I find this place more comfortable to live in.

*I felt his delicate sensitivity and deep consciousness which has been polished over three billion years. I was moved very much to learn that they are not different from us, though different in appearance.