Reformation of Heavenly World 33 －Visions on Japan-US and Japan-China Relations: What Causes Wars, the Consciousness of People.

image: Source & hikarino-umi-kara
Reformation of Heavenly World 33 －Visions on Japan-US and Japan-China Relations: What Causes Wars, the Consciousness of People.

In the last post “Reformation of Heavenly World 32” I wrote in a comment: “some elements (...) were engineering the realization of NWO (New World Order), their long-cherished ambition, by breaking up World War Ⅲ at any cost.” Actually, after the visions described in the present post had been seen by Serena, the countries concerned, including Japan, got involved in such a state of affairs as is shown below. Our topic this time is related to that point and thereabouts.

Goddess: “Now, no humans have enough power to cause great wars; however, there are small flash points here and there. Some of them are highly adept at how to cause wars, so it is required that as many people as possible are aware of such a deception. The wars can be avoided if a lot of people put a veto on them.”
At present, the security environment surrounding Japan is in a dangerous state due to some territorial disputes.
Some people are bent on plotting to isolate Japan from neighbors (three sides), so that youwon’t join hands with any of your three neighboring countries. Faithful to this aim, they have been brainwashing the Japanese people, making believe Japan’s only friend is America and that if Japan is forsaken by America, it means Japan becomes subject to invasion by its adversaries which have yet never invaded Japan before!
In reality, China has no intention to invade Japan. Nor have Korea or Russia. It costs them too great a loss to invade Japan because it takes enormous energy and time. Moreover, they are not confident in their own competence to rule Japan after such invasion.”

I: “What if these three countries and Japan join hands with one another?”

Goddess: “The U.S. and European nations will certainly retaliate.”

I: “Just like two atomic bombs were once dropped on Japan?”

Goddess: “Yes, indeed. And now, they have even more dangerous weapons available. Artificial earthquakes, nuclear bombs, biological weapons will also be used as means to the end. They can also threaten Arab states not to export oil to Japan. However, Japan has enough wisdom and technology to prevent that, and for that matter, its neighbors will be willing to offer their help.
Joining hands with the evil elements of the world contradicts the Japanese conscience. Japan has no need to depend on, nor fight against, any other country. The Japanese people can build fair international relations on an equal basis. In order to realize this, they have to wake up. Then, their country will naturally be changed.”

“As she said, it’s just a deception by America to make believe China, Korea, Russia, North Korea, etc. are all dangerous countries. In order that Japan won’t be compromised by such U.S. maneuvers, we have first to recognize the peoples of these countries as humans equal to ourselves. If someone seriously take it that Westerners in developed (economically affluent) countries are superior while peoples living in poor countries are inferior, it means they are indirectly driving the wars. They should wake up from their own foolish delusions.”


Regarding some territorial issues, the environment surrounding Japan is found as described by the goddess. For a detailed discussion on this matter, see also Ukeru Magosaki, The Truth of the Postwar History 1945-2012 (Sengoshi no Shōtai 1945-2012), The Truth of Japan-US Alliance (Nichibei Domei no Shotai).
Wars never fail to be caused through instigating maneuvers operated by some people in power. So we shouldn’t be duped into following their intention. These people arouse antipathy between nations or races, working on their sentiment in an attempt to bring them into a war. Before that stage, they first prepare a social environment that involves an economic chaos, people’s frustrations and latent anger, and then lead people towards a war so as to let them steam off their anger. They are very adept at such a technique (social manipulation). We should be careful enough to penetrate their deception.


However, the seeds of war ― found as a more fundamental problem ― are the sentiments of discrimination seated in peoples’ minds. For example, if you think to yourself that the Japanese are a superior nation whose level is higher than the Chinese or the Korean, it means there is a war factor in your mind.
While the cultural level depends heavily on the economic power, the most simple-minded people believe this power decides the relative merits of nations. Historically speaking, however, economically affluent nations are usually affluent only because they have exploited or plundered other nations by some unfair means. This merely means that these rich nations are adept at wrongdoings. While such are simply historical facts seen as they are, it just indicates one’s foolishness if one looks down upon people in economically poor countries without taking account of these facts.
We shouldn’t be led ashtray by any manner of instigating nations’ antipathy towards other nations, or any remarks on superiority or inferiority of a nation to another. For this is the very way those in power act on people’s egoism as a war factor.
In Shanti Phula’s Blog on Current News, no article in this line has ever been adopted. To avoid any misunderstanding, let me mention this: Though I have intensely condemned American deception and hypocrisy, this criticism based on facts is not directed toward the American people, but toward the ruling elite with their interest and right pivoting around the US Presidency. If the American people are to be criticized, it is because they have been deceived by those in power just like the Japanese, and have continued to help promote lots of unjust wars. As for the Japanese, they are equally guilty in an indirect manner.
Then, what should the Japanese do? As I said in some of the by-talks in my video lectures, I would like to point out that we should conduct ourselves through concerted efforts with the persons with good sense in America. For example, after 9.11, people in the American military became aware of the lies told by the ruling elite; they have keenly felt that they were deceived and were complicit in unjust wars. Most of them don’t commit wrongdoings, but aspire to fight for justice. It is these people of the American military who are the best informant on what is the truth and who are telling lies, ― as the result of having performed their duties in the most dangerous areas in Afghanistan, Iraq, etc.
We need to nail down who are friends or foes, instead of distinguishing between any two parties identified as nations or countries. Moreover, those who were enemies until yesterday sometimes change their attitude. If anyone shares the same same spirit with us, we have to take such people as friends. The situation of countries around the world as well as individuals’ attitudes is in constant change. We can err in judgement if our way of looking at things is fixed.


14. Then, in my vision, something like ships (battle ships) were seen approaching some islands. I think I owed this vision to Ameno-mikageno-mikoto.

Ameno-mikageno-mikoto: “This won’t develop into a war. There is no other way for humans to live but to live with nature.”

” These ‘islands’ are the Senkaku Islands. It seems to me this situation may intensify militarily to a considerable extent. However, I don’t think it will develop into a war, either. For Hotsuma deities will descend in order to deter such a war. However, even if noone engaged in wars, it would not assure the survival of humanity: It is essential to dismantle all nuclear plants on Earth. This point is crucial, because our present competence is not enough to control the nuclear power plants. Environmentally, just a few more major accidents would become too much burden not only for humans but also for nature.”

Later, this vision became a reality. Military tension between China and Japan was heightened to a great extent when an article was adopted on Shanti Phula’s Blog on Current News, on September 18, 2012: “ [Rabbit Flash Report]【Image】1,000 Chinese Fishing Vessels More Ominous Than Imagined”（text in Japanese). However, as had been predicted by her vision, this situation did not develop into a war eventually. 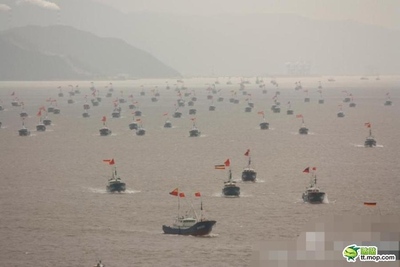 It is now known that these incidents were staged by Bo Xilai’s party of conspirators, which belongs to Jian Zemin’s group operating in liaison with CIA. These gangs have all been involved in the issue of Tibet, as well as the Xinjian issue (that of Xinjiang-Uygur territory). By contrast, Messrs. Hu Jintao and Xi Jinping are our friends fighting against CIA-related elements [villains, traitors]. However, those people who understand this fact seem to be very small in number. If you look at articles of The Epoch Times (大紀元), however, you will easily find that Mr. Xi Jinping is bent on shutting out Jian Zemin’s group.

Yet, as it seems to me, as long as people look at the Chinese through their colored-spectacles, those in power in China all look like villains. So it is observed that some Japanese yell for Prime Minister Abe when he makes aggressive remarks against them, a very infantile phenomenon. First and foremost, they need to take off their colored-spectacles called ‘nations’ or ‘countries’.