As I already mentioned in my previous comment, when these visions were seen in 2012, World War Ⅲ was still not destined to be avoided without fail, even though there were fair chances that it might well be prevented. The reason was that some elements in close relationship with the Western countries, especially the USA, were engineering the realization of NWO (New World Order), their long-cherished ambition, by breaking up World War Ⅲ at any cost. So it was required that their ambition should be smashed. This is shown in her visions this time.

8. I was standing in front of the United Nations Headquarters building in New York. National flags around the world which stood side by side in front of the building were disappearing one after another in my sight.

― “The head of the country has now been wiped out.”

Looking back, I found a boy, enigmatic in appearance, was standing there. 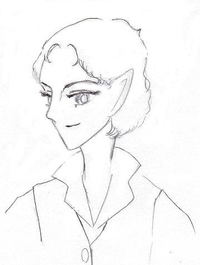 “As anticipated in a prior warning, some people in power who did not stop evil doings have been wiped out. These were hierarchs in a position to exert a great influence over the society.”


As I explained in “Reformation of Heavenly World 27”, 999 out of 1,000 humans on earth were unable to keep their souls in the Sirius System, at this point in time. Their souls were either wiped out or had fallen to the Animal System or even lower. About 100 out of the 999 had their souls extinguished already. They were reduced, as it were, to an existence only provided with a body in physical dimensions. More specifically, they only possessed a physical body and what is called an “ether double”, another body overlapping the physical body. In a vision illustrated in “Reformation of Heavenly World 27”, the ether double was represented by a pneumatic doll.

Now in this vision, among most heads of state across the globe who still retained their physical bodies and ether doubles with their souls already wiped out, the evil ones got extinguished together with their ether doubles.


Before I knew it, most flags were gone. And when I noticed again, their number was reduced to ten or less.

“To be sure, speaking of the heads of state, I don’t think ten persons are too few at all. Usually, I don’t write about a matter like this, but I would like to venture to introduce some of the 10 heads of state who are still alive, with a view to remove numberless people’s misunderstanding. Among them are: President Chavez of Venezuela, President Assad of Syria and President Hu Jintao of China. Wrong images of these people are imprinted by media, so I would rather venture to unveil their name.”
(Serena: Actually, when I saw some flags still there, the national flag of China remained among them. I clearly remember this because it was so impressive, though I did not tell Mr. Takeshita about this. )

In this exposition written at that time I only described the names of these three figures, so I will add some more. Among them are also the present president of China, Mr. Xi Jinping, the former president of Cuba, Fidel Castro, President Rafael Correa of Ecuador, President José Mujica of Uruguay, and some other persons.
I believe we can say that these fine persons are the lights on our planet Earth at the present moment. 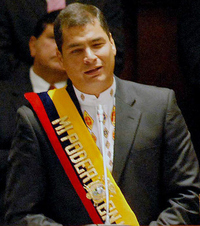 President Rafael Correa of Ecuador
“Calling Bush the devil is offending the devil… The devil is evil, but intelligent.”
Source：http://richardkoshimizu.at.webry.info/201011/article_24.html 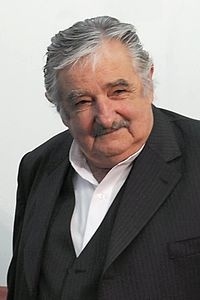 
9. Before I knew it, a girl was standing by my side. She resembled the boy who had made an appearance in #8. We were looking down at the city of New York from a tall tower (building?). Smoke was coming out from buildings everywhere.

I continued on and on, and she gave me a happy answer every time. 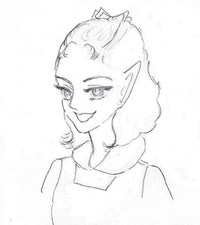 ”I think she is a little sister of that boy. To be sure, it seems to me they are fairies living in New York. Most likely, their abode is in Central Park. Fairies like them seem to be not less than a hundred thousand in number in New York alone.”
（Serena: While talking to her, I also had a vision of them living in Central Park, though I also didn’t communicate this to Mr. Takeshita.)


At a due time, fairies like these siblings are destined to be reborn as humans in the next stage of transmigration.


10. “It’s already over with this city where evil desires have been prevailing, arousing such desires of humans and attracting those filled with them. It’s already over. ” A female voice was heard. Then, a goddess appeared, saying:

― “Even more importantly, Serena, please pass my message to Master Takeshita: ‘Please be careful enough: From now on, the society on the earth becomes dangerous. So please take care of your own personal safety. This world will be abnormal for some time. Innocent people will be judged in the courts. Endurance will be required just for a while, yet with sufficient precautions.’” 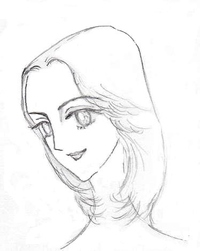 “She is a Hotsuma goddess Tatanekomaumiyano-himemiko, the Second Great Emperor of 1st level Solar System. As she says, now we find here and there the symptoms that Japan, too, is getting close to being an abnormal surveillance society, another version of the U.S. society dominated by the “Patriot Act”. Without taking exceptional precautions, we are likely to enter an age where the innocent will be criminalized. However, such is always the trend of the society when it sets toward waging a war, so we will have to endure the political tyranny under such crazy people for some time.”

The abnormal world she warned us of is nothing but our world after the Secret Information Protection Act (“Act on the Protection of Specially Designated Secrets”) is enacted by Japan’s ruling Liberal Democratic Party. In case such a law (the Heisei version of the notorious “Maintenance of Public Order Act” enacted in 1900) is passed without Japanese citizens realizing the danger, the national politics will be dominated by a state autocracy. The threat of this law is best described by the article “To Plug Japanese Citizens’ Eyes, Ears, Mouths: This Is the Bill for Secret Information Protection Act” published on the Newspaper Akahata (Red Flag) issued by the Japanese Communist Party. They have summarized the point quite tactfully, so please be sure to take a look at it.
This law is dangerous because it is clearly a preparation for free passage to wars on China in the future. The behavior of Abe’s regime perfectly conforms to the intention of the “Japan Handlers” (the Bush/Nazis camp) ― whose scenario of Japan and China war is evident if you read the Joseph Neigh’s report, etc. With such a bad law enacted under the current situation, the world must become abnormal as described in the goddess’ warning.
Fortunately, however, now that the Japan Handlers have changed sides to the Nathaniel camp, the scenario of breaking up a war on China and then World War Ⅲ has also been eliminated. As I have written in Shanti Phula's Blog on Current News, it is now expected that the Japanese government itself will enter the Nathaniel camp from November 1 onward, parting ways with Obama’s regime. Accordingly, such a pro-war legislation won’t make sense any longer. A bad law like this should be given up before long, but even if it is enacted, it won’t threaten the lives of Japanese citizens. For it must be that if Prime Minister Abe engineered any war based on what would be his personal ideal, his regime would be smashed by the Japan Handlers, or else he himself would be executed by gods.
As it turned out, what the goddess in this vision suggested with her appropriate advice was staved off eventually.