Reformation of Heavenly World 31 － Visions: Threats in Our Surroundings, a Dialog with Earth, Our Way of Living.

image: Kaleidoscope
Reformation of Heavenly World 31 － Visions: Threats in Our Surroundings, a Dialog with Earth, Our Way of Living.

At the stage of the year 2012, there was no prospect that World War III would be avoided without fail; however, there were actually fair chances that it might well be prevented.

On the other hand, when we talk about the crisis of the planet Earth, the risk factors include not just such a war, but also various other problems. For example, we need to remove nuclear weaponry and nuclear plants without delay, to cope with the vicissitudes such as earth quakes, volcanic eruptions, or ultimately with the pole shift of Earth. Moreover, the risk factors extend from these threats to some elements in our daily life. All of them should be eliminated one by one in order of importance.

However, the most serious threat is the presence of the Dark Ones who aim to reduce the population on Earth. They are bent on purposely deteriorating the health of humanity by use of these factors. Without smashing them up first, coping with the above factors is impossible. So the most importantly, we need to recognize what’s happening all around the globe today, looking the facts in the face.

13. A tall tower came into sight.
The word “spread” is found written down by the side of the picture.
Most likely, this means electromagnetism; it seems like our body will suffer a great damage. 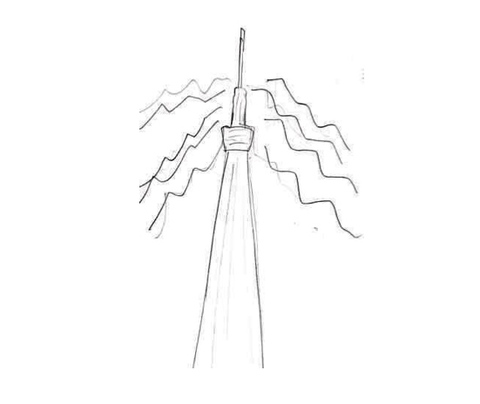 “This surely looks like a TV tower. As Serena points out, it seems to impose a great burden on the health of human body. For the reference of readers, I will attach the URL of a useful article posted on Kaleidoscope: http://kaleiodo11.blog111.fc2.com/blog-entry-216.html”

“From now on, people have to be careful about various matters:
electromagnetism, volcanic and solar activities;
radioactivity, hormones, additives.”

As is written here, we have to be careful enough about foods. They should be cooked with the use of iron frying pans or ovens, instead of electronic ovens, Teflon-coated frying pans, aluminum pots, electromagnetic cookers, etc. Food additives should be avoided as best we can. In our time, eggs hardly go rotten; however, nobody believes such a food, resistant to decay, is safe. In addition, we are obliged to take heed to radioactivity.

So, it has become quite hard to protect the health of our children, as well as of ourselves. In my sense, the ‘safe’ school food service is utterly unconceivable. It is the food safety that is first sacrificed in consideration of the service cost reduction. Since the time I was fed with school meals, use has been made of poor-quality foods, such as milk that is immediately before disposal and unable to be put on sale. Our present social structure is such that people in the weakest position are put at a disadvantage. However, children must not be sacrificed. Moreover, you will find the harm done by electromagnetic radiation is too serious not to consider the risk of smartphones and game machines, ― instead of carelessly giving them to our children.

I was flying in the midair as if floating above Earth. Below my sight was Earth rotating slowly. When I glanced over the geosphere, various human voices were heard. I heard cries such as:

Or prayers, such as:

I set myself to listen to children’s voices, too:

These were young children’s sad wishes.

Next were heard outcries such as:

― “Why in the hell has the world changed into a state of despair like this!?”
― ”There are no such things as gods!”
― ”If God existed, He could not have let these doings take place!”

”Saying a prayer to gods is very important. However, people are wrong if they direct their anger or damnation to gods. Their anger should be directed to politicians and themselves: The disorder created by humans should be recovered by humans themselves.”

Then, focusing my consciousness on Earth, I set myself to listen to her voice:

― ”I am filled with sadness all over. Many kick the ground, hit it with fists, moan, hate, and seek for help.”

Earth: “Hard? I’ve been undergoing this since when humans were born. I don’t take it as hard, only I feel sad for it.”

I: “We humans have excavated your surface everywhere, have contaminated the oceans and the atmosphere, and have cut down the precious woods, devastating your body. Don’t you have any anger for that?”

Earth: “No, I don’t, ― because I exist for giving. I give things necessary; that’s my happiness.”

Earth: “The joy of giving is greater than that of being given. Humans are also my precious family. A parent who patiently waits for her children to grow never gets angry.”

I: “However, the Earth has as its function an auto-purification. This may involve the life and death of humans and other creatures.”

Earth: “That is caused by irresistible forces. In fact, my body couldn’t be maintained without taking the balance. However, humans can be reborn just like other creatures. So the auto-purification doesn’t take place due to anger.”

I: “What do you expect from humans?”

Earth: “Leave your sorrow. And live a life filled with happiness! I have a lot with me, prepared to fit your needs.”

I thanked her, and left there.

“I think anybody should be able to tell whether or not Earth is a living existence. All living beings have consciousness. Actually, it is possible for a person like Serena to communicate directly with Earth, in a manner like this.

The Hopis worship the earth as Mother Earth. They continued to issue the warning that uranium below ground must not be mined. However, this warning sent from God was violated. In my view, if humans on Earth had been well aware that everything has consciousness and life, their warning would have been accepted with no protest.”


As soon as I took a look at this correspondence, I reached the conviction that the grief of Earth was already close to the limit of endurance. However, while I felt sorry for her, I had no other choice but to ask her to endure a little longer. For, at that time, there were various thorny problems of high priority on Earth; among others, the task of avoiding WWⅢ had to be prioritized at any cost.

Yet, as I commented, I thought if people knew, as a natural fact, that Earth had life and consciousness, therefore a spirit, their way of living itself might well be changed in some degree. My idea like this finally crystallized into Seiko Nakanishi’s illustrations “Planet Series”. In my feeling, these illustrations have a great significance. It may be possible for Hotsuma deities, divine spirits and space people to communicate with these astro-deities and listen to their voices. However, even among them, there are none who have ever caught them in sight.

It may be that the present humanity can communicate with astro-deities like her by using their technology. I feel like technologies such as HAARP have a potentiality for that. Eventually, the day may come when people will get convinced that these astro-deities do exist.