image: Shanti Phula
Summary of Structure of Universe Including Spiritual Dimensions and Core of Message from Sumiwataru-takakihoshino-himemiko 27

Yesterday the message from Sumiwataru-takakihoshino-himemiko 27 was posted on the blog. I’m afraid that you don’t understand well the contents of the message and my exposition unless you have some knowledge by watching video lectures on religious studies or reading about the System of Heavenly World.
Therefore, I’d like to give an outline and a brief account here.
It is something about personal affairs and you don’t have to believe at all what I say. However, if you are interested in life after death or the structure of the universe including the spiritual dimension, it might give a useful hint to you. 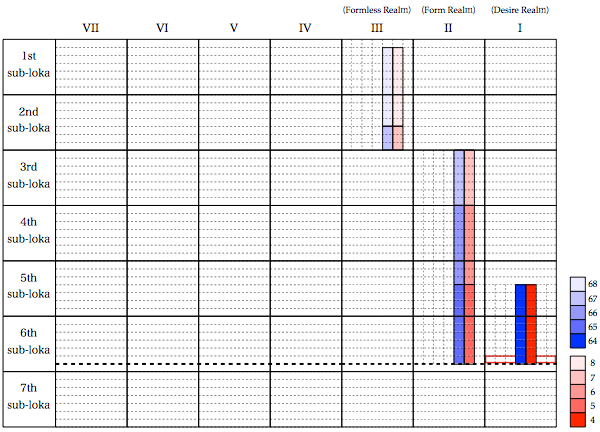 The part boxed off in the above diagram shows the 1st System (Sirius System). The diagram below shows specific description of the System. The 1st System is divided into seven realms (lokas); the three realms from the bottom are Bhu Loka (Desire Realm), Bhuvar Loka (Form Realm) and Svar Loka (Formless Realm). The part in blue is the realm of dimensions where Heavenly deities (Hotsuma deities) live and the part in red is the realm of dimensions where Earthly deities live. There are still a lot of blank areas. They are dimensions with several decimal places. There are also realms to which any dimensions are not given.

The structure of spiritual universe defined by Buddhism extends from the 4.0 to the 8.0 dimensions. According to the concept of Buddhism, the state of mind beyond Hisouhihisousho of 8.0 dimension is Metsujinjou (a state of complete cessation of the activity of the mind), which seems to be considered to be achievement of enlightenment. Actually, however, it means just gaining access to the 8.1 dimension. It is nothing to do with achievement of enlightenment. Like this, there are few religions in the world which provide proper perspective of the world. They don’t know even the existence of Hotsuma deities.

At present, deities have actively engaged in religious and political reformations in the world. If many people know the true picture and structure of the universe, they would get to know that the Supreme God many people are obsessed with is not God but *Tenma in Buddhism and that he is the being living in less than the 4th dimension and he is not God who created the universe.

Above the 1st System in the diagram, there is the 2nd System with the same structure and then the 3rd System and so on. Systems are piled up one after another.  The entire is the 1st block. In the block, definitions are given to the dimensions up to and including the 1st System of Creator Deity of Love and deities in human form do not exist in other upper Systems.

The 6th and upper blocks are outer space. There existed 12 blocks in total. This is the structure of the universe. However, this time, the dimension has significantly expanded. As a result, the universe has evolved into the structure with 20 more blocks added to the existing blocks.

Deities in human form do not exist in upper realms, where only consciousness exists. To put it simply, it is safe to say that when a body is formed in consciousness, a dimension is defined.
In video lectures and others, I explain I descended from the 1st block of Heavenly deities living in the 5th System of the Creator Deity of Love 45 million years ago. This is proved by the message from a goddess who remembers about those days. I told you that I have come from the outside of the framework of the 1st block and I just gave a hint in the Q and A session that I have come from outer space.

The last message shows that I have actually descended from the highest dimension in the 12th block.
Posted by Shanti Phula at 2:00 AM