A bill which gives the president a fast-track authority (TPA bill) was rejected in the Congress. However, the bill was brought to a vote again and was passed by the Senate on 14. There are still many Democrats opposing to the TPP agreement in the House and reportedly, it remains uncertain how the bill will be finalized.
I feel something like obsession of the Obama administration. However, even though the U.S. is on the verge of collapse of a nation, I feel that the U.S., which is on the verge of collapse, cannot afford to negotiate about the TPP. If the public know the truth, there is even the possibility that they will get furious, go on a rampage and attack random the rich. The Obama administration tries to promote the TPP negotiations in spite of such situations. All I can think about is that the administration feels confident in suppressing the public with military power.
Since the TPP is a core bill of the New World Order (NWO), it apparently is against the will of God. Those who call Obama a person who sides with Light seem to be ignorant or be part of Darkness. I think I will be able to explain about this at some time.

From a Japanese article: Overseas Articles Never Reported by Mass Media – May 21, 2015 – 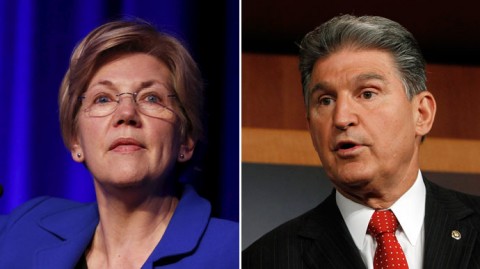 US Senators Elizabeth Warren (D—MA) and
Joe Manchin (D-W.Va) (Reiters)
Two Senate Democrats have sponsored a bill demanding the White House reveal the terms of the Trans-Pacific Partnership (TPP) to the public at least two months before Congress could give President Obama fast-track authority.
Joe Manchin of West Virginia joined Elizabeth Warren of Massachusetts in proposing the two-page Trade Transparency Act, reports The Hill. If adopted, the bill would require the White House release the “scrubbed bracketed text of any trade agreement” no less than 60 days prior to a vote in Congress on fast-tracking the treaty.
“The Trade Transparency Act would ensure that the public, experts, and the press can engage in meaningful debate over the terms of trade deals before Congress reduces its ability to shape, amend, or block those deals,” said Warren. “Before Congress ties its hands on trade deals, the American people should be allowed to see for themselves whether these agreements are good for them.”
“If President Bush was willing to pull back the curtain and allow the American people to view the entire Free Trade Area of the Americas agreement, then President Obama should be willing to do the same before we grant him fast track authority,” added Manchin. “If this bill is as good for the American worker as proponents have claimed, then the Administration should let the American worker see the details before Congress is forced to grant the President Trade Promotion Authority.”
Warren has been an outspoken critic of the TPP and other free trade agreements, releasing a report on Monday laying out two decades of “broken promises” by successive administrations when it came to free trade treaties.

The White House has been promoting the TPP as “the most progressive trade agreement in history,” that would have “higher labor standards, higher environmental standards” and “new tools to hold countries accountable.”
Obama himself stepped up to champion the deal, firing back at Warren by calling her “a politician like everybody else” whose arguments “don't stand the test of fact and scrutiny."
The administration has also maintained that the treaty is still being negotiated, and that fast-track authority was needed to finalize the talks. A senior adviser at the National Economic Council argued that publicly announcing the details of the deal would be harmful to US interests.
“There’s a very good reason we won’t do that: We’re trying to drive a hard bargain so the American people get the best deal possible,” wrote Greg Nelson in a White House blog post. “We can’t do that if we show the other players our cards, so to speak.”
Obama himself has shrugged off comparisons with other free trade deals. “You need to tell me what’s wrong with this trade agreement, not one that was passed 25 years ago,” he told the Organizing for America conference in April.
Read more: Obama defends, pitches TPP trade deal as democrats balk

Michael Wessel, a former Obama campaign adviser and one of the people cleared for access to TPP drafts, says that specific criticism is impossible, though. Anyone who has read the text of the agreement could be jailed for disclosing its contents, he wrote in Politico.
“The government has created a perfect Catch 22: The law prohibits us from talking about the specifics of what we’ve seen, allowing the president to criticize us for not being specific,” Wessel wrote. “Instead of simply admitting that he disagrees with me—and with many other cleared advisors—about the merits of the TPP, the president instead pretends that our specific, pointed criticisms don’t exist.”
Congress is currently considering a bill giving the White House fast-track authority to negotiate the TPP, a trade pact that would include 11 Pacific Rim countries, notably excluding China. Warren and Manchin maintain that keeping the details of the agreement classified makes it impossible for legislators to amend the treaty, and difficult to block its final approval.