image: Source
FCCJ Gives Awards to Reporters and Controversialists Bashed by Power Authority and Mass Media Patronized by the Government

Reading the article, it seems that the Foreign Correspondents’ Club of Japan (FCCJ) barely supports Japanese journalism. Without freelance journalists and the Club, we can hardly know anything about the truth. To put it the other way around, the government is likely to step up their crackdowns on them.
You can tell such thing will definitely happen just by looking at the U.S., while in parallel, it is apparent that surveillance on the Internet will be strengthened. The website that many people visit could be subject to oppression in the future. I think the Shanti Phula’s blog will be all right for the meantime.

English translation of a Japanese article: Ryusaku Tanaka Journal – May 22, 2015 – 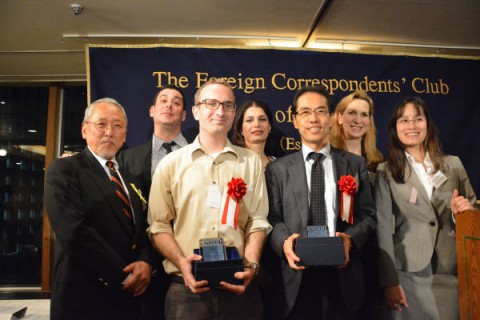 Selection Committee members and Award winners – They are people inconvenient to the establishment in Japan and Press club media.
= on the evening of 22 at the FCCJ.  Photography by this writer =

The “Freedom of the Press Awards” ceremony arranged by the Foreign Correspondents’ Club of Japan (FCCJ) was held this evening.

The award winners are journalists and controversialists who have told the truth while fighting against power authority and terrorism. We introduce the comments of main award winners:

He has reported extensively on defoliant Agent Orange and the issue of U.S. military base in Okinawa over many years.

“Over many years major mass media in Japan have ignored the violation of human rights which continues to be committed. I’ll keep on reporting to tell the truth for good people in Okinawa.

*The Friend of Press Award: Mr. Shigeaki Koga (Ex-bureaucrat of the Ministry of Economy, Trade and Industry)

“My opinion ad was posted on New York Times yesterday. I finished the article with this: “The Abe administration treats journalists not in a democratic manner but in an authoritarian manner.”

“However, the reality is much worse. I think information about this important award will not be posted by mass media in Japan. (A voice from the ceremony site “The Tokyo Shimbun will report it!”)

“I have been greatly encouraged by receiving this award. All journalists in Japan, let’s fight together against the pressure of the government.” 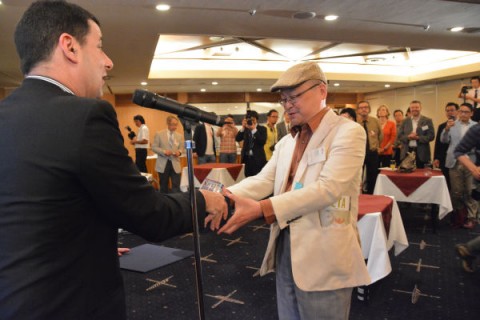 Iwao Miyajima, editor at monthly “FACTA”, was highly evaluated for his in-depth news coverage of inviolable sanctuaries such as the JOC (Japan Olympics Committee) and Nuclear Power Village. = on the evening of 22 at the FCCJ.  Photography by this writer =

*Publication of the Year: Tokoyo Shimbun

The newspaper received the credit for its investigative reporting of nuclear power plants and corruption (political scandals). Chief Editor Kengo Suganuma gave a speech as a prize winner as follows:

“In the world of journalism, there is a phrase that the first victim of war is the truth. In Tokyo Shimbun, which recognizes that we are in such situation, all reporters work hard to keep an eye on power authority and report the truth.”

It has been revealed that when a foreign reporter of a newspaper posted a comment of Professor Nakano in an article on the comfort women issue, the foreign diplomatic missions made a protest against the newspaper and advised it to ask for an opinion of another expert.

The “Fallen Hero Award” was presented to the late Mr. Kenji Goto.

Mr. Goto’s mother, Junko, gave a comment for the award. “I know for certain that Kenji is glad to receive such an honorable award in the heaven. (snip) I would have to say that my son died a sad death due to the Japanese government’s failure to act. I call on the government to reflect seriously.”

The FCCJ has highly evaluated controversialists who has received the bashing from power authority and the mass media patronized by the government, and journalists they dare to ignore, and the Club has awarded them. We are simply astonished to learn what a big gap there is between global standards and Japanese standards.