image: comicvine.com & militaryblog.jp
Chaos in US as international bankruptcy of US Fed faction sinks in

Reading the article, you see that harsh battles over the ownership of gold were waged behind the scenes because a new financial system will be backed up by gold ingot. According to information from the secret society of Cobra, it appears that most of gold ingot has already been kept by the Nathaniel camp. The article shows how desperately the cabal including Obama is trying to plunder some of the gold ingot.
“Jade Helm” is referred to in the article. The original article refers to it in more detail. However, it is too complicated to understand. I have omitted it here.
To put it simply, as mentioned in the article introduced by the chief editor of this blog the other day, the website managed by Mr. Gordon Duff and the website with the opposite viewpoint give completely different opinions on Jade Helm. According to Mr. Gordon Duff, Jade Helm is a mere operation and free from risk. On the other hand, the opposing blog says that the U.S. military will round up American citizens and put them into FEMA camps.
The matter of fact is that neither is right. The U.S. forces are on the side of American citizens. It should be Special Forces, not U.S. forces that will try to detain citizens and sent them to FEMA camps by having ISIS commit terrorist attacks and taking advantage of confusion under martial law.
However, due to spread of such information, people cannot tell the difference between U.S. forces and Special Forces or between militias and ISIS.  It is likely that American citizens will misinterpret U.S. forces and militias, their friends, as their enemies and fight against them with guns. Apparently, U.S. forces are afraid of such situation.
I think that at this time the Obama administration intends to put the plan into action. If they understand that they would be absolutely defeated, of course, they would put off the plan.

Chaos is increasing inside the United States as the US Khazarian controlled faction of the Federal Reserve Board continues to be shunned by most of the world. In response, the Khazarians are desperately trying to provoke race riots or otherwise get arms bearing US citizens to fight the US armed forces and police. At the same time, the US armed forces and agencies are moving against both Israel and their US based Khazarian proxies, notably the Bush/Clinton/Rockefeller crime family.
In what Pentagon sources say was a direct message to the Rockefeller family, Dave Goldberg, the Chief Operating Officer of Facebook, died in mysterious circumstances at age 47 last week.

Facebook is owned by David Rockefeller grandson Mark Zuckerberg. Pentagon sources say this was a message by the armed forces to the Silicon Valley oligarchs that from now on the high tech industry in California would be under military control.

To understand the frenetic power struggle now taking place in the US, it is worth taking another look at the secret history behind the ongoing US corporate government’s bankruptcy. More of this was revealed at a meeting last week between representatives of the White Dragon Society and Chinese royal family members. The Chinese royals presented documentary evidence that will force a change of how 20th century history is written. The documents describe secret agreements between US Presidents Franklin Roosevelt and Harry Truman, Chinese Nationalist ruler Chiang Kaishek and, members of the Manchu royal family. The documents show how Roosevelt, Truman and US Secretary of State George C. Marshall, over time, took 20 ships laden with Manchu gold to the US and fraudulently used the bullion to finance Roosevelt’s New Deal and the Marshall plan.
The gold was taken to the US starting in the 1930’s under the promise it would be used to finance the development of East Asia and the creation of a federation that would include Manchuria, China, Korea and Japan, the royal family sources said. The Americans also gave the Manchurians plates to allow them to print US dollars.

The two current heirs to the Manchu gold are Kim Young Hee (金英姫) and Zhang Sheng Zhi? (張勝植). They claim there have been numerous attempts to kill them and replace them with look alikes so, as a security measure, they have asked that their pictures be published as seen below: 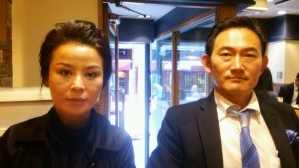 Photographs of their ears have also been taken as an extra precaution.

The reason these two people claim they are being chased is that they have the legal rights to gold worth about $30 trillion.

What is happening is that, at the highest level of global finance, paper and numbers written on bank computers are not accepted as currency. The owners of the US branch of the Federal Reserve Board (Bush/Clinton/Rockefeller etc.) are being asked to pay their debts to the rest of the world in gold. For that reason they are desperate to try to stake a fraudulent claim to the Manchu gold they stole all those years ago (and have long since used up). They will not get it because the whole world is sick and tired of their criminal antics.


In fact, looking through a gold lens sheds a whole new light on many recent historical events. First of all, the Lehman shock of 2008 came because the corporate government of the United States failed to make a gold payment that was due. That led to a temporary cut off of US trade. The US Corporate government then managed to get a large gold loan from the Ming dynasty faction in Asia on the promise that Barack Obama would be made president and the US would reform itself.

After Obama’s actions showed that he was no better than George Bush Jr., the Ming gold dried up. US cabal staged events since that time have all been in search of gold and financing.

The red shirt movement in Thailand, for example, was really aimed at getting custody of the huge historical Thai royal gold stash. The “Arab springs” in Tunisia and other Arab counties were also aimed at the gold stashes these countries had. The invasion of Mali was staged to seize gold mines there. The tsunami and earthquake attack on Haiti was also aimed at getting gold mining rights. The invasion of Libya was an unsuccessful attempt to steal Colonel Muammar Khadaffi’s gold. The March 11th, 2011 tsunami and earthquake attack on Japan was also aimed at extorting Japanese imperial gold.

So now, the cabalists are frantically hunting royals with claim to historical gold troves. The reason the Obama regime has suddenly been sucking up to Iran so vigorously is because the Persian historical gold trove is worth $46 trillion, according to the current heir to the Persian throne. The Iranians have responded to this US foot kissing by publicly blaming the US government for 911 and telling many other truths. In any case, the heirs to the Persian fortune have made it perfectly clear the US cabalists will never get their hands on their gold.

However, the fact that over 6000 US retail shops have recently been closed illustrates how the US corporate government and their American debt slaves can no longer borrow money to buy trinkets from the rest of the world.

That is why rent a mobs are being paid with Fed funny money to try to start race wars in Ferguson, Baltimore, Seattle and elsewhere.

There was also a big push on the internet to use cabal controlled web sites to push “Jade Helm,” a psychological warfare operation against the American people and US military.

The desperation is becoming palpable now because of what just happened to Saudi Arabia, one of the US Khazarian factions’ last sources of money. The Pentagon and the Iranians forced Saudi’s new king Salman to fire crown prince Muqrin and Saud Al Faisal (who has been Saudi foreign minister for the past 40 years). They were fired to remove Bush influence from the Saudi regime and to force an end to the attacks on Yemen, Pentagon sources say. The Pentagon sources are saying they are still seriously thinking of allying with the Yemeni Houthis to carry out a complete regime change in Saudi Arabia.