Hope on the Horizon and It Comes from Greece, Russia and Iran Starts Barter System，Russian Fleet saves Americans in Yemen, Fighting Escalated in Donetsk

image: guardianlv.com
Hope on the Horizon and It Comes from Greece, Russia and Iran Starts Barter System，Russian Fleet saves Americans in Yemen, Fighting Escalated in Donetsk

I have chosen four Russian-related articles. According to the information from Mr. Fulford, Greece barely managed to make a loan payment to the IMF on April 9 and the financial crisis in Europe seems to be delayed. Judging from some other information, China might have provided funding. Such backstage deal is considered to be the reason why European countries including Britain betrayed the U.S. and joined the Asian Infrastructure Investment Bank. In other words, the financial collapse in EU is fatal to bankers.
This is indicated by the first article by Mr. Paul Craig Roberts, too. Mr. Roberts says that Greece has to determine to default to have neocon doctrines of Washington come to naught.
The second article shows that Russia and China are building the financial system based on barter economy.
The third article is a surprising piece of news that the Russian army saved evacuated foreign nationals, many of whom were Americans. In Yemen, the Chinese army saved evacuated people and it was the Chinese army that saved Japanese. Although Abepyon had gave a silly remark “I won’t let anybody lay a finger on Japanese” apparently with the same level of “under control”, it is the Chinese army that actually saved Japanese from the predicament. This ending really fits Abepyon.
The fourth article is about resumed military conflict in Ukraine as expected. However, even if they should actually rush into war, the Ukrainian government has no chance of winning. Even if the U.S. forces train them to some extent, it is unlikely that Ukrainian forces will do good work for the government. To put it simply, is it likely that the NEET* will become soldiers capable of competing with pro-Russian militants in Donbas after three to six months’ military training? It is absolutely impossible.

*(Note) NEET – the young not currently engaged in education, employment or training

Hope on the Horizon and It Comes from Greece

Paul Craig Roberts
Washington in its arrogance, seeing itself as “indispensable,” poses a continuing threat to the lives of hundreds of millions of people. The extraordinary number of dead that Washington has murdered in the 21st century–”The American Century”–is dismissed as “collateral damage” in the “war on terror.”
The war on terror is a hoax. It is a creation of the evil neoconservatives who intend Washington’s world hegemony and Israel’s hegemony from the Nile to the Euphrates. The rest of mankind has realized that Washington’s drive for world hegemony means the entire human race will be dismissed as “collateral damage” as Washington establishes itself as the “exceptional, indispensable country,” the country whose will is above the rule of law and whose morality is non-existent.
The stark reality is that America, which wore the White Hat during the Cold War, now wears the Black Hat, and Russia and China have traded the Black Hat for the White Hat. The hope for mankind no longer resides in the West, which has entered a militarized gestapo existence conducting war against its own citizens and the world at large.
Aggression is the hallmark of 21st century Washington and its captive European vassal states. There has not been a 21st century year without slaughter of innocents by “Western civilization.”
In this interview with Eric King– http://kingworldnews.com/dr-paul-craig-roberts-4-12-15/ –I speak of the hope that comes from revulsion at the looting of southern Europe by fellow EU members and the American hedge funds. If southern Europeans can find the intelligence to comprehend that the New York and German financial interests have decided to destroy the prospects of southern Europeans for the sake of the profits of American and northern European financial interests, European peoples, brainwashed into the grand glorious prospects of being an EU member, might realize the treachery to which they were subjected and leave the exploitative system known as the European Union, a system designed to destroy the sovereignty of European nations.
Powerful Russia stands there as an alternative. As does China. If the Greek government has the sense to default to those who are determined to exploit and to destroy Greece, Italy and Spain will follow. Russia and China are waiting with open arms, and unlike the Western governments, Russia and China are not bankrupt.
Without southern Europe NATO is a non-entity. The Brzezinski and neocon doctrines of Washington controlling Eurasia come to naught. Without NATO Washington’s pretense of speaking for “the world community,” that is, for the white people, rings hollow.
We have to pray for life. Unless Washington can be isolated life on earth has dim prospects.
----------
English translation of a Japanese article: NEVADA Blog – April 14, 2015 –

Russia and Iran Start Trade by Exchange
Russian President Vladimir Putin has singed the executive order to lift the ban on providing “S-300”surface-to-air missile system to Iran. Payment of the missiles is to be made by the barter system.
According to Russian’s deputy foreign minister Ryabkov, Russia has already taded Russian grain in exchange for Iranian crude oil.
Here is a question: Why does Russia, oil producer, accept Iran-produced crude oil, though they have their own crude oil?
I pointed out in the past that Russia and China aims to introduce the barter system which is never dependent on the dollar or euro. Russia is steadily carrying forward it.
The trade between Russia and North Korea is conducted by the barter system and it is said that Russia will adopt a bartering system for trade with Greece. And if China engages in this trade, a trilateral trade among Greece, Russia and China can be conducted by the barter system.
With such move expanded, the world, particularly developing countries, will not need to sell their resources cheap in order to get funded.
In other words, if giant nations of Russia and China encircle such developing countries, what will happen to our Western countries?
If goods are gained only by the barter system, I wonder if Japan has something to deliver to the other country.
The barter trade system is a new system (though it is the first transaction form we humanity conceived of) which fundamentally overturns the current currency and financial system. It turns out that we get back to a time when a country with gold is not a big country but a country with goods is a big shot.
The barter systems have started from Russia and China. If this trend rapidly spreads, what will happen to the West (particularly Japan) with gold alone?

A new Ministry of Defense (MoD) report circulating in the Kremlin today states that President Putin has authorized the Black Sea Fleet CCB-201 Vishnya-class intelligence ship Priazovye to use all offensive/defensive measures needed to protect itself, and civilian lives, against any and all “detected” aggressive combat aircraft, including those operated by the US Air Force, in the current Yemeni combat zone.
According to this report, this extraordinary order by President Putin authorizing the potential shoot down of US military aircraft was necessitated by the refusal of Saudi Arabia to allow the evacuation of Russian citizens trapped in the Yemeni combat zone after the deliberate 1 April destruction of the Russian consulate in that nations largest city Aden by US-directed Saudi warplanes.
To the specific American warplanes placed in danger by this shootdown order, this report continues, are the US Air Force KC-135 Stratotankers that have begun daily aerial refueling of Saudi warplanes to allow continuous airstrikes upon the Yemeni people in this latest example of the Obama regimes continued unauthorized and criminal wars against nearly every nation on Earth who disagrees with them.
Upon their receiving permission to target any warplane, including those of the US Air Force, attempting to interfere with their humanitarian mission to evacuate refugees, MoD experts in this report say, the Priazovye arrived a few hours ago in southern Yemeni port of Aden where it successfully boarded over 300 foreign nationals, including Americans, seeking to leave this combat zone.
Most astoundingly of these evacuated foreign nationals, however, this report states, are the large number of US citizens seeking Russian protection to save their families lives as the Obama regime has ignored the pleas of up to 4,000 American nationals who are believed to still be stranded in this war torn nation.
----------
English translation of the Japanese version of Sputnik – April 13, 2015 – 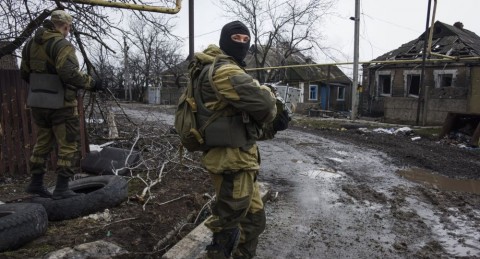 The OSCE, the European security watchdog, in a special report posted on its site, has concluded that on 12, the military conflict between the Ukrainian forces and pro-Russian rebels restarted in Donetsk and Shyrokyne.

According to the watchdog, Ukrainian military units, specifically voluntary battalions advanced beyond the separation line at the village of Shyrokyne in the suburbs of Donetsk. Military conflicts raged due to bombardment by tanks and the use of heavy weapon, automatic howitzer, artillery, machine guns and guns.