Abe-pyon held a press interview in front of the Israeli national flag to openly provoke ISIS. According to the article, Abe-pyon “visited Middle East, accompanied by executives of 26 military-related companies” to talk about business in Israel, while Japan’s mass media reported it as “humanitarian support.”
The photo of Abe-pyon meeting with McCain is very impressive. It is like proving that the Abe administration is part of Evil. 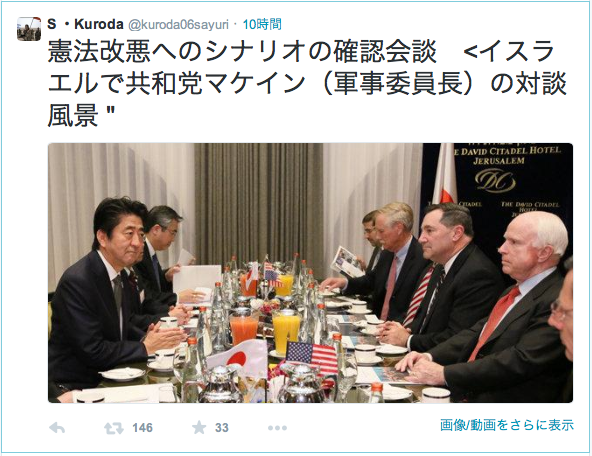 S.Kuroda@kuroda06sayuri   10 hrs ago
Meeting to confirm a scenario leading to worsen the constitution < Scene of talk with a Republican McCain (chief of Military Commission) 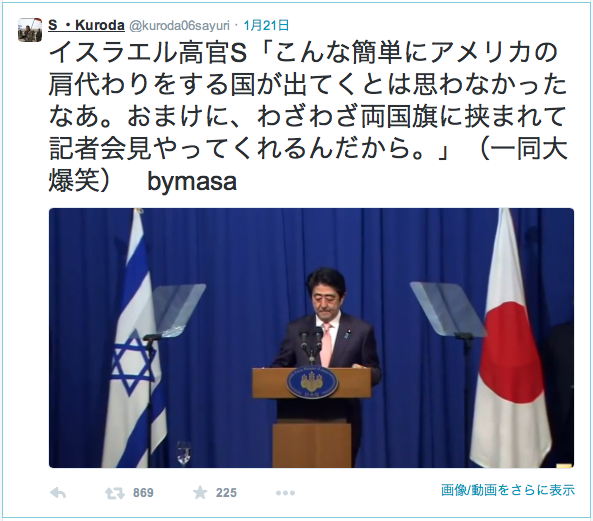 S.Kuroda@kuroda06sayuri   January 21
Israeli high official S “I never dreamed of such a nation that would appear to take over from the U.S. so easily. Additionally, its prime minister was kind enough to dare hold a press conference between the flags of two countries.” ( All burst into laughter) 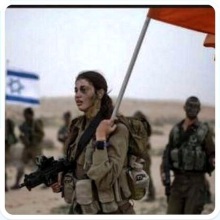 I understand why Abe-chan disappeared from the prediction for 2015global politics. It’s because this incident was within expectation. This incident will have Abe-chan end his political life. A A British magazine “The World I 2015” 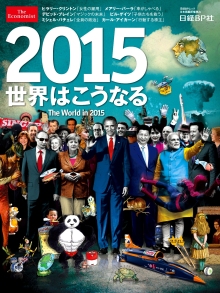 I hope that some time a second Snowden will appear to explain about this “farce – incident of confinement for ransom” with CIA as scripter and producer, war-mongers Japanese as performer, Netanyahu as stagehand and McCain as director, after one year of preparation. This enables the U.S. to reduce the war spending for Middle East. 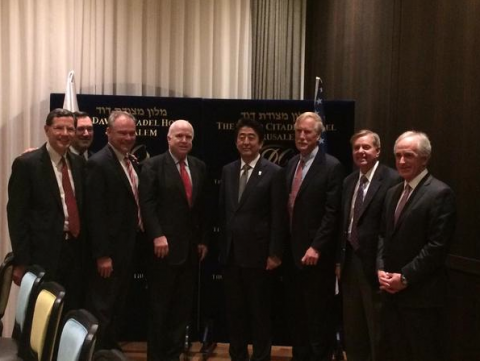 I have skipped through the electronic versions of media in Europe and Middle East. Only one media outlet reports Abe-chan’s trip abroad as “humanitarian support”, while more than media outlets report it as “visit to talk about military business,” “provocative diplomacy,” “gun and financial sales,” etc.

This time, Abe-chan ventured into Middle East, accompanied by executives of 26 military-related companies. These executives talked about business in Israel every day. This was reported in the local newspaper or Saudi newspaper. Only Japan’s media report as humanitarian support, hiding such real situation. This visit indicates the Japan’s participation in war in Middle East.

Abe-chan had a talk with Netanyahu and McCain over dinner at night on 19. I hear that media gag order about this meeting was issued in Japan.

A German newspaper reports: “Japan’s Prime Minster held a press conference between the Israeli national flag and his own country’s national flag. We have never seen such a leader except for U.S. President Bush. It is nothing other than provocation.”

An Israeli high official says: ““I never dreamed of such a nation that would appear to take over from the U.S. so easily. Additionally, its prime minister was kind enough to dare hold a press conference between the flags of two countries.” ( All burst into laughter)

They didn’t predict that Hilary would disappear.
Disappearance of Abe is one-shot? We wish it would happen.

Foreign Minister Fumio Kishi said “What is happening in Ukraine is changing the current conditions by power. So is the Northern Territories issue.”  His remark has invoked the wrath of Russia.
On 21, LDP Vice President Masahiko Takamura told the reporters at the headquarters of the party “It is out of question to stop humanitarian support (to cope with ISIS) and we cannot pay ransom, either.”
It is doubtful whether he understands how much meaning what he said has. It’s provocation as written.  He’s an idiot.

What will happen? It ought to happen to fan the feelings of Japanese. It’s fake. Let’s brace ourselves for it.
There is a nice phrase: “It’s self-responsibility.” Let’s stick to this stance. Act cool.

I expect LDP members with good sense to appear.
We have to sweep this foolish administration out of power quickly.
Although the Democratic Party is also stupid, this guy is insane.