Before explaining the meaning of the 5th message sent from Sumiwatarutakakihoshino-himeikiko on December 13, I’d like to expound the governance structure in the heavenly world.

As I mentioned in the last comment that I invented the Futomoani figure to show the governance structure in the heavenly world, the system of heavenly world is based on the Futomani figure. The following figure is given to make you easily understand the structure. 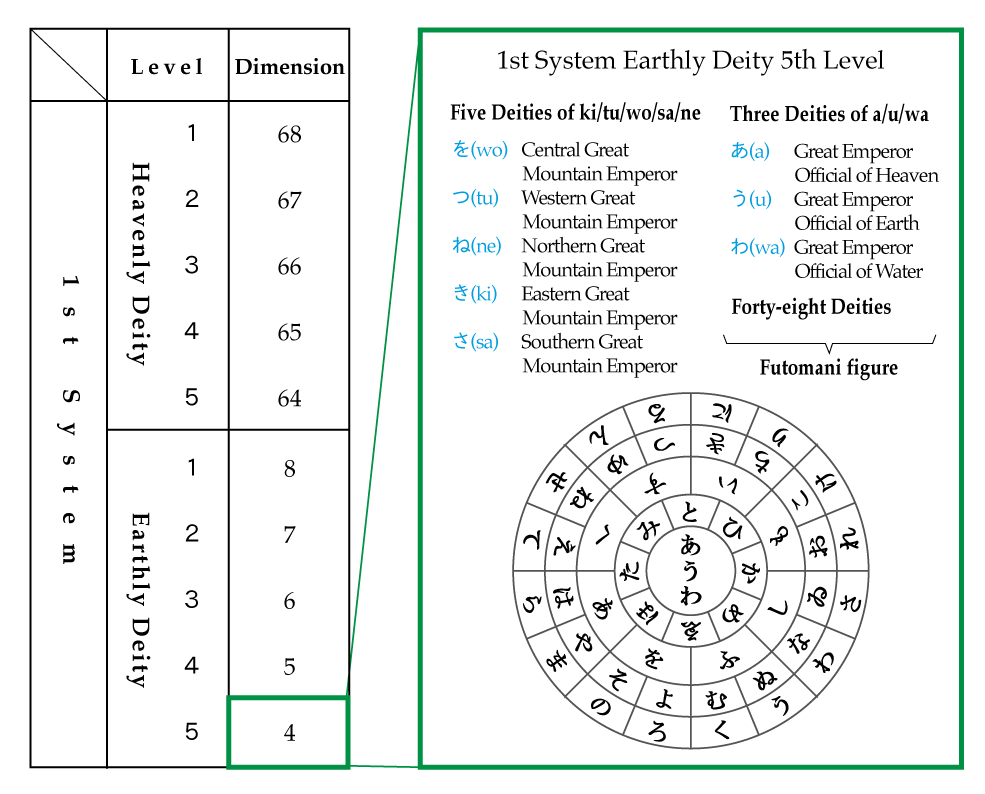 The deities corresponding to the five directions are called “Five deities of ki, tu, o, sa and ne” and they are top-level Great Emperors in each level. In Taoism, these five deities are called Five Great Mountain Emperors. The deities shown in the Fumomai figure serve these five Emperors. First, at the top are “Three deities of a, u and wa,” who are called “Three Great Emperor Officials” in Taoism. They are served by “Eight Deities of to, ho, ka, mi, we, hi, ta and me,” who are served by “Eight Deities of a, i, fu, he, mo, wo, su and si.” And on the outermost ring of the Futomani figure are “Misofu Deities (thirty-two deities).”

Each character is equivalent to position and the individual name of deity assuming the position exists separately. Described in descending order of rank are
we, hi, ta, me, to, ho, ka, mi, and mo, wo. su, si, a, i, fu, he.
In the concept of Theosophy, the two deities “we” and “mo” are the heads of two groups of eight deities and two Guyanin (Avalokitesvara Bodhisattva). The remaining seven deities who serve them are seven Archangels. In Theosophy, there are two Christs and two pairs of seven Archangels who serve each of the two Christs.

The two Christs in the Earthly Hierarchy have been Mithra and Maitreya for the last two years. This explanation is give based on Theosophical view with a focus on the Hierarchy so that you can easily understand it. Originally, however, explanation should be given based on the Futomani figure of Hotsumatsutae.

The two Christs are served by 32 deities: inner 16 deities and outer 16 deities serve a group of “eight deities of to, ho, ka, mi, we, hi, ta and me” and a group of “eight deities of a,i, fu, he, mo, wo, su and si”, respectively. Basically, 16 deities correspond to 12 constellations. It means that there exist four more deities, respectively. They are called the Lipikas (recorders of Karma). We can say that these 48 deities in total play a key role in governing the heavenly world.

Such order exists in parallel with each level in each System. Our Sirius System is composed of Heavenly Deity 1st to 5th Levels and Earthly Deity 1st to 5th Levels. There exist four supreme deities in the Sirius System who control the entirety of “five deities of ki, tu, wo, sa and ne” and “51 deities” including the three deities of a, u and wa. Please refer to the illustrations of deities drawn by Mrs. Seiko Nakanishi and their names.
Posted by Shanti Phula at 2:12 AM