It seems to me that this is a real image. This is probably the head of real President Obama. I reported that he has already been executed. I suppose that after execution, he was beheaded. There is a rumor saying that there is a jump room, which enables to transport a human being onto Mars in twenty minutes. If this rumor is true, it is possible to place Obama’s head in a place where the Mars Rover can shoot it.
At any rate, a man of insight would find this photo to be an extraordinary message to us.

Excerpt from a Japanese article: Trend of Japan, World and Universe – November 30, 2014 –

(N. Morgan) Many strange images have appeared on footage from the Mars Rover. In this latest capture, it appears that an image of President Barrack Obama! Are these random images, made by nature or was this a prediction of the future in some way? Although Mr. Warning found the head, Paranormal Crusible discovered the likeness of Obama by cleaning the image in a software program. What’s most interesting about this relic, is that it has an uncanny resemblance, to the United states president, Barack Obama. 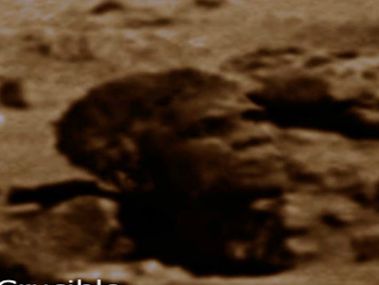