Marine Le Pen, French Member of European Parliament: French to withdraw from EU in the event of winning French presidential election [The Voice of Russia and others]

image: fc2.com & 47news.jp & bloomberg.co.jp
Marine Le Pen, French Member of European Parliament:
French to withdraw from EU in the event of winning French presidential election
[The Voice of Russia and others]

According to the first article, Marine Le Pen, leading presidential candidate, claims that France would withdraw from EU to regain the national sovereignty.

When the Greek crisis occurred, I commented that the elite would take the opportunity to manipulate to have EU member countries give away sovereignty but end in failure and that ambition of unified currency was nothing but nonsense.

In this blog I have repeatedly claimed that each country should return to use of home currency and trades with other countries using international currency based on currency basket in accordance with national capability. We can see the world is moving toward that direction.
The third article shows that Russia is a hub of such big change and they might set about doing something. It might be true.

English translation of the Japanese version of TheVoice of Russia – November 29, 2014 –
Marine Le Pen, Member of European Parliament: French to withdraw from EU in the event of winning French presidential election 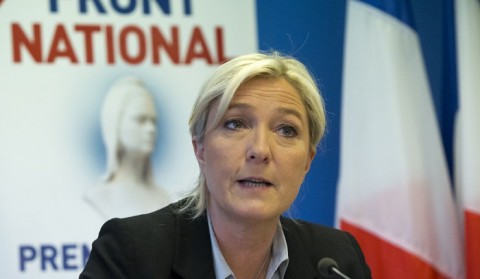 Marine Le Pen, Member of the European Parliament, who serves as the president of the “Front National”, has clarified her stance that she would hold a national referendum on France’s withdrawal from EU in the event of winning French presidential election in 2017, Le Figaro reports.

Ms. Le Pen intends to regain French sovereignty in terms of land, law, economy and currency. She has declared she would resign from her post as president if opposition to withdrawal from EU is expressed in national referendum.
“I want to make it clear that nothing can be changed unless we regain freedom to decide our destiny by ourselves. I want to come in office to change this situation.”

----------
English translation of the excerpt from a Japanese article: Eiken Itagaki’s “Untold story behind politics and economyuncovered by mass media” – November 28, 2014 –

Pope Francis I, worrying about crisis of “EU dissolution”, addresses to the members of the European Parliament to take in the slack

The EU is facing a crisis of dissolution. This is because it is only Germany with experience of defeat in war that enjoys a descent economic or financial situation. The country Germany is helping countries suffering from bad economic or financial situation. In economy war after the war, Germany became a victorious nation along with Japan. Neither England nor France is in good shape. In Greece under financial reconstruction, people, who are forced to live hand-to-mouth due to such an austerity budget, are going to see the biggest frustration. Therefore, there are stronger voices saying, “Let’s withdraw from EU” or “EU should be dissolved.”

In spite of effort to boost the economy, buoyancy will not follow. No expansion of employment, overflow of the unemployed on the street and advanced ageing of the society. To make things worse, unlike in Japan, an overflow of immigrants has added a burden of social welfare spending to the country.
Under such conditions, the right-wing force, which ostracizes immigrants, is gaining power and making inroads into the political world. Especially radical groups calling themselves as “Neo Nazi” are showing active movements and are viewed as dangerous.

*When Greece, Portugal, and Spain made a default on government debts, a heavy burden was imposed on German Chancellor Merkel: Germany was the first country to be asked to provide financial aid for them. So the Chancellor has complained about the “withdrawal from EU.”  Seeing her, British Prime Minister Camron also got to embrace a strong complaint on an influx of immigrant workers from European countries to UK. He has called for “introduction of value-added immigration quota” and complained that “the country would withdraw from the EU unless admitted.”

In response to this, Chancellor Markel turned around and said “we prefer the UK’s withdrawal from the EU to our compromise on the freedom in labor market within the EU.”

Collapse of the ruble: Piercing one USD equivalent to 50 RUB rate

We have seen a collapse of Russian ruble; one UD dollar is equivalent to 50 rubles.

In the past, one dollar was equivalent to one ruble. One rube has become one-fiftieth now in value. It’s a terrifying crash, but it is the beginning of the end. Russian officials are talking about a far terrifying story.

“It is possible that one dollar will become 100 rubles.”

“The Western countries would get panics. But they asked for it. Let’s enjoy Russian roulette!”

Russia is trying to dragging the global financial market into the hell.
They are enjoying seeing which side will scream earlier, Russia or the West.

It was a long time ago. A Russian agent said, “Russia has power enable to destroy the world. You’d better remember it.” Then I asked “Is it about ICBM?” He said “(grinningly)No!”

If this destruction means a crash of Russian ruble, it turns out that they had set an incredible time bomb in the global financial market.

The Russians can endure severe winter. However, when we are thrown into such severe winter, what would happen to us?

If we are thrown into the same severe winter, we would be frozen to death in a moment because we have not prepared for anything and are almost completely unclothes.

The “White Bear” can survive even at 50 degrees below zero, but “how about us?”
Posted by Shanti Phula at 2:00 AM