Three hundred tons of gold has reportedly been looted from Central Bank of South Africa. It said that a fake Jew female Satanist, the former Governor of the SRB, is probably involved in it. Reading the article, I suppose that she bribed the Central Bank and those concerned with the bank, with R360 million worth of banknotes which was destroyed. Judging from the situation, 300 tons of gold was presumably moved to the secret vault of the Swedish Central Bank.

In other words, they can print banknotes almost for nothing and have assets such as land, buildings and gold as central banks’ possessions, as much as they want. Since such central banks are factually possessed by them, each and every asset is possessed by the family. If gold is adopted to support the value of a currency in the future, their control of the earth would have been completed because they have most of gold. This is the reason why any central bank should not be a private company.

Excerpt from a Japanese article: Trend of Japan, World and Universe – November 26, 2014 –

A former Director of the South African Reserve Bank, Mr. Stephen Goodson, has blown the whistle on the scandal of the bank.

Most people have no idea what the purpose of the Reserve bank is.
Mr. Goodson, a former director of the South African Reserve Bank has revealed the corrupt of the institution (in his book).

According to Mr. Goodson, the Board of the Reserve Bank has absolutely no idea how the money creation process works. In other words, they do not actually understand that, when a commercial bank crates a loan or an overdraft, the customer spends the money into existence. In other words, a bank loan creates brand new money. 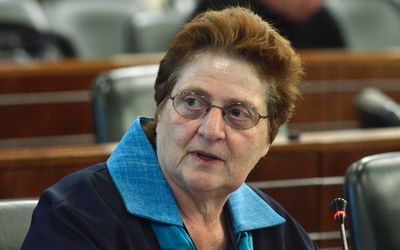 The scandal of Gill Marcus, a Jew, the former Governor of the SARB, is both alarming and disturbing. After selling sandwiches in London, she studied economics and went to work for out Reserve Bank.

She was so awful that she was fired in 2004. However, after secretly following [her predecessor] Tito Mboweni around, she created a black-list of all his ill-deeds. Later, she reappeared as Governor of SARB under mysterious circumstances.

Gill Marcus immediately removed the requirement that all Reserve Bank meetings must be transcribed and recorded. She shredded documents and changed the voting rights of shareholders. Then she introduced changes that would phase out the “old guard” and amended the rules to allow only herself to appoint new candidates.

Finally, she secretly allowed a Swedish company to print South Africa’s banknotes, while the local printing facility stood idle. This was a disaster. R800,000m worth of bank notes were put into circulation that did not even come close to meeting the required printing standards.

Shortly afterwards, R360million worth of banknotes had to be destroyed because they were “accidentally” printed with the same serial numbers. Since then, for secrecy reasons, the same company is still responsible for producing many of South Africa’s banknotes.

Kuruger Runds have been found to be 5% short of the stated gold content. SilverDoctors.com stated that this was likely to be a skimming operation by the South African Reserve Bank. If you purchased Kruger Rands after 2010, we suggest that you have them tested.

300 tons of gold valued at over R300 billion was stolen from the SARB, with the help of insiders as part of a bigger looting exercise valued at a massive R2.25 trillion.

The question is… where is South Africa’s gold now? Not in the hands of the people that mine it, that’s for sure.
*For details, refer to: http://www.henrymakow.com#sthash.VsOhmOD0.dpuf

According to Goodson, the solution to this problem, at least in part, is the creation of a People’s Bank. This bank does not allow money to be created out of nothing by a bank then loaned to the government at interest. Instead, the government issues its own currency based on our ability and requirements to develop.

This kind of bank is not new. It has been created several times in the past with incredible success. However, each time such a bank was created, either the bank was mysteriously closed down, or its country was bombed. When a conventional Centaral Banking system is put in place, economic hell soon follows.

Until the people of South Africa understand the history and lies behind the banking system, and have the humility to admit that we have been misinformed by a skewed economic education system, then we will never see economic freedom.
Posted by Shanti Phula at 2:00 AM