Not only the content of the article but also this photo perfectly describe the true nature of this god of plagues, Oh, sorry, not god of death but Rat Man (Woman), Oh, sorry, again, Ms. Hasegawa.   I feel that the last part in red letters describes the true intention of Ms. Hasegawa. 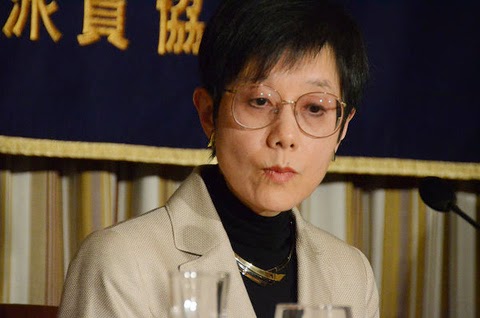 Editor's Note)
Just reading red letters made by Mr. Masatoshi Takeshita,  you may grasp the essentials of the article.
Today Professor Emeritus at Saitama University Michiko Hasegawa, who Prime Minister Abe appointed as NHK executive committee member, held a press conference about “active pacifism” in the Foreign Correspondent’ Club of Japan.  She explains as follows:

There are two types of pacifism: one is passive pacifism and the other is active pacifism.

Passive pacifism means when one is attacked, his friend never helps him, saying “Sorry, I don’t fight” and as a result the person dies.  They are flower children who think that just singing song with flowers on the head can contribute to peace.

Once a battle occurs, this becomes useless.

Active pacifism is a stern word.  Peace keeping operation can be warfare or is war itself.

Neighboring countries express concerns over “active pacifism” described by Prime Minister Abe, and it is quite natural.  Active pacifism does not mean that the Constitution be discarded.

Ms. Hasegawa showed her real intention in the Q and A session with the press.

Tanaka: Although the U.S. Marine Corps and multinational corps are going out to Afghanistan and other counties in the name of active pacifism, they have not been able to realize peace.  In conflict region, there is no boundary line between combat and non-combat areas.  If the Self-Defense Forces personnel are killed or they kill citizens in battle, can the government take responsibility for this activity?

Hasegawa: “I think that this is the very problematic point of active pacifism I have pointed out.  Active pacifism is always close to war and sometimes becomes war itself.  Actually the Self-Defense Forces personnel may be killed even if they just carry food.  There is no boundary line between combat and non-combat areas.  We should interpret that active pacifism is to go off to war.  I think this is a serious contradiction between war and peace.”

Reporter Janes: Did the Imperial Japanese Army take the high road or go down the wrong way?  Do you think that class-A war criminals are not guilty?

Hasegawa: “With regard to former Prime Minister Tojo’s responsibility for war, the word war responsibility has to be carefully handled.  This is just the concept of international law and has many dubious aspects.  Please read a book written by a former Professor Tokyo University Yasuaki Onuma.  He describes in the book how the winner created this concept and the loser were denounced and how the concept was developed.  We have to pay careful attention to the use of the word war responsibility or war crime.”

This response can be interpreted as denial of the Tokyo Judgment.  The questionnaire, reporter Janes goggled in astonishment.

On top of this, Ms. Hasegawa says: “The preamble of the Constitution stipulates that passive pacifism is bad.”  How on the earth can she interpret so?

Ms. Hasegawa also says: “I believe that when we never forget spiritual pacifism, we can find out the best mixture of passive pacifism and active pacifism.”

It appears that the “active pacifism” upheld by Prime Minister Abe and Professor Emeritus Hasegawa means rushing into war under the guise of pacifism.  “Pacifism” is used to beat around the bush and camouflage the truth.

Prime Minister Abe has installed a troublesome controversialist as NHK executive committee member.  Following Director-General Momii, the remarks of Ms. Hasgawa seems to cause a controversy.