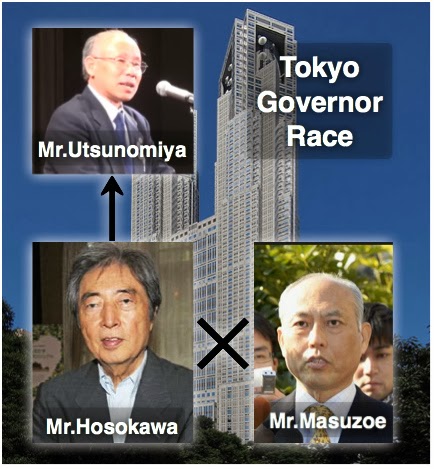 Although I have already mentioned this matter, I share the same opinion with Mr. Uekusa. Although I think that Mr. Utsunomiya is the most suitable person as Tokyo governor, the support of Communist Party and Social Democratic Party will never give him a chance to win. Furthermore, I don’t think that residents in Tokyo have such a good eye for people that they choose Mr. Utsunomiya as Tokyo governor. If so, votes for abolishment of nuclear power generation are divided in two, it is favorable to the LDP/Komei coalition government which will develop organizational election campaign. As Mr. Uekusa says: “Here we have to engage in strategic thinking,” it is the best strategy that first, a person with political experience assumes the post of Tokyo governor and then when the public will gets ripe, Mr. Utsunomiya becomes deputy governor. The vision many people secretly image is that Mr. Hosokawa becomes Tokyo governor and Mr. Utsunomiya deputy governor and that Mr. Utsunomiya, who has been known better, will win in the next Tokyo gubernatorial election, I think.

English translation of an excerpt from a Japanese article: “Unknown Truth” by Kazuhide Uekusa – January 13, 2014 –

The media have held off on the news on the information on candidacy of former Prime Minister Morihiro Hosokawa in the Tokyo gubernatorial election.

They take precautions not to create a trend which enables Hosokawa to be elected.

The Nago mayoral election and the Tokyo gubernatorial election are held on January 19 and February 9 respectively.

Additionally, the Yamaguchi mayoral election is expected to be held on February 23. These three elections are likely to affect the fate of the Abe administratin.

Above all, the Abe administration is extremely vigilant of the possibility that the gubernatorial election will become an elction to debate over the pros and cons of its nuclear power plant policy.

The Abe administration has to have a governor under the thumb of it come out in order to take full control of vested interests caused by the Olympics.

1. A sure winner
2. A person with administrative career
3. A woman if possible

Taking into consideration the first requisite, in particular, they showed the policy to support Mt. Masuzoe.

However, if Mr. Morihiro Hosokawa, former Prime Minister, runs for the election, the situation would drastically change.

The Abe administration is running out of control, neglecting the voice of the sovereigns.

If the Metropolitan gubernatorial election is held in this difficult time and former Prime Minster Hosokawa runs for the election, appealing for abolishment of nuclear power generation, it is not surprising that it will bring about a drastic repercussion.

Additionally, the gubernatorial election is scheduled to be held in Yamaguchi Prefecture, a home territory of Prime Minister Abe, too.

In Tokyo Metropolis, Mr. Kenji Usunomiya has announced to run in the election, calling for abolishment of nuclear power generation.

He has shown the policy to speak for us sovereigns in various problems of the Constitution, TPP, consumption tax and Henoko. He is an excellent candidate, who is qualified to represent the sovereigns.

It can be easily imaged that many sovereigns want to give more support to Mr. Kenji Utsunomiya than to Mr. Morihiro Hosokawa, because behind Mr. Hosokawa stands Mr. Junichiro Koizumi, who deteriorated Japanese society into the society with the law of the jungle.

However, the people as sovereigns have to engage in strategic thinking.

We have to think of what is the most important thing for us people.

We have to take into consideration the possibility that support of Mr. Utsunomiya to stick to their principles might allow Mr. Masuzoe to win the election.

Division of votes in support for abolishment of nuclear power generation will be advantageous to Mr. Masuzoe.

It is important to compare with simply supporting Mr. Utsunomiya the advantage of unification of votes cast in support for Mr. Utsunomiya and Mr. Hosokawa, which will make it possible to prevent Mr. Masuzoe from being elected..
Posted by Shanti Phula at 1:37 AM