Aso’s Sick Joke might not be a Joke. - Nikkan Gendai: Move toward “Cutting off with Inose” Steadily Advances LDP Orchestrates 1.19 Tokyo Gubernatorial Election - 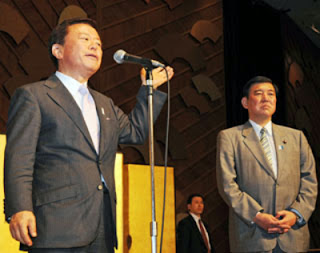 
Aso’s sick joke might not be a joke. Mr. Amaki’s viewpoint is general viewpoint. However, his speculation is out of focus because an atmosphere of Inose bashing was not created by the government. The Abe administration is, of course, “thinking about his replacement” but it is not likely but most likely that a person who Prime Minister Abe believes to be his subordinate is the anti-Abe camp: the person is Aso. It is apparent that Aso is watching for an opportunity to get a position as the next prime minister. Therefore, thinking this way is quite natural.


English translation of an excerpt from a Japanese article: Nikkan Gendai – November 27, 2013 –

Move toward “Cutting off with Inose” Steadily Advances

LDP also starts keeping its distance from him./ © Nikkan Gendai

The more excuses he makes, the deeper he gets dogged down in the mire. Tokyo Metropolitan Governor Inose is forced out. The LDP, which he believed to be a supporter, started whispering about the schedule for the next Metropolitan gubernatorial election, rather than turned its back on him. The election is definitely “January 19 next year” at earliest.

There was a party for the House of Representatives lawmaker Kazuhide Sugahara, LDP member from Tokyo at a hotel next to Tokyo Metropolitan Government Building on 25. Minister of Finance Aso suddenly began a speech by saying: What a great turnout! Mr. Sugahara, are you going to run for the Municipal gubernatorial election?”

It is, of course, a sick joke. This is the current atmosphere of LDP. LDP headquarters has confirmed anew that it didn’t recommend him as a candidate in the gubernatorial election and is steadily advancing toward breaking off with him.

It is expected that at the Tokyo Metropolitan Assembly, which kicks off on 29, LDP will take a strict stance on this problem and grill him harshly: “The party has an extreme interest in this problem.” or “He has not given convincing explanations to the citizens of Tokyo. Since the Japanese Communist Party has already proposed the establishment of Article 100 Committee (special committee established by local government based on Local Autonomy Act Article100), Inose would undoubtedly be covered with flames of severe criticism. Under the leadership of a suspected governor, important events such as budgetary debates set for February next fiscal year and establishment of Organizing Committee of Olympic Games would not move ahead. So the LDP has targeted at the Metropolitan gubernatorial election set for January 19 next year to look for a way out.

Unless Inose is driven to resign, the gubernatorial election is, of course, not conducted. It is whispered among people around Inose that he will “make a clean start.” A total of 499 telephone calls and emails were sent to Toyo Metropolitan City Hall until the evening on 26, 90 percent of which was criticism against him. It shows that in order to weather the unfavorable wind, he has to appeal to the citizens through a repeat election after resigning from office for now.

If people with a sense of crisis against reckless driving by the Abe administration assciduously criticize Tokyo Metropolitan Governor Inose, who has been put into a corner due to a issue of political donations, I’d like to advise them not to joint in Inose bashing done by the media. The issue of funding loan to the governor by Tokushukai is undoubtedly full of suspicions. I am also critical of Governor Inose. It is possible for him to be driven into designation.

However, we have to realize that the Inose bashing this time was plotted. This is not the first time for Tokushukai to scatter around a lot of money. Inose was not the only person that received money. This is a common sense in the political world both among the ruling and the opposition parties.

Even when I tried to run for an election, I was advised to go to Tokushukai. Nevertheless, why is Inose alone brought into question now?

We should interpret that the administration tries to distract the public with the Inose problem above all else and steadily enforce maladministration behind the scenes. If the left-wingers were happy with Inose bashing, they would be made a fool of at the end.