Dr. Hawking, a British physicist, declares: “There is no heaven nor afterlife.” 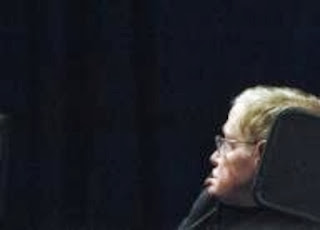 Dr. Hawking, a British physicist, declares: “There is no heaven nor afterlife.”
[Reuters]
The reason I make a fool of people called scientists is
summariezed here in this article.

The reason I make a fool of people called scientists is summariezed here in this article. They never admit the existence of anything other than what can be measaured. Unmeasurable right and wrong has no meaning to them. Ethic does not have meaing, either bacuase they think there is no afterlife. Since they adopt a stance that they are the law, they can seek the greatest value of their acation without violating the law. Such people are full of ambition. As they desire, they will disappear into nothingness after death. I think this is fine. I don’t care if people who seek for ambition, that is, the bad will disappear.

English translation of an excerpt from the Japanese version of Reuters – May 18, 2013 –

Dr. Hawking, a British physicist, declares: “There is no heaven nor afterlife.”

Dr. Stephen Hawking, British physicist, 69, known as “physisicst on the wheel” denied the idea of afterlife, saying the heaven is a fairy tale for people afraid of the dark. He expressed his opinion in an interview with the Guardian.

Dr. Hawking said: “I regard the brain as a computer which will stop working when its componets fail. There is not heaven or afterlife for broken computers; that is a fairy tale for people afraid of the dark.”

When he was 21, Dr. Hawking was diagnosed with amyotrophic lateral sclerosis (ALS), a progressive neurological disease, with a few years to live. He told: “I have lived with the prospect of an early death for the last 49 years. I am not afrid of death, but I’m in no hurry to die. I have so much I want to do first.”

Asked about how people shoud live, he answered “We should seek the greatest value of our action.”

Dr. Hawking has been globally known for his book “A Brief History of Time” published in 1988. When he claimed in his book “The Grand Design” in 2010 that God was not involved in the unverse’s creation, he was severely criticized by the religious world.
Posted by Shanti Phula at 1:50 AM