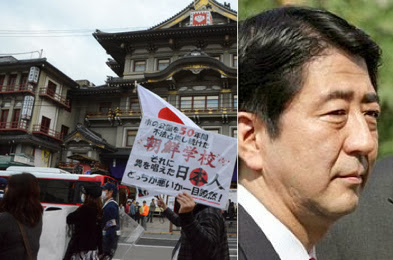 
In the past, as I recall at the time of the Beijin Olympic Games, there was an incident in which in a collision between the Chinese and Japanese, police officers turned a blind eye to the Chinese who committed violent act while they expelled the Japanese who were assaulted. The police officers who performed such acts reportedly felt chagrined. They say that the fact is that the Fukuda administration that didn’t want worsening relations with the Chinese government gave an order to the police not to use violence against the Chinese.

As seen in this article, something very inexplicable happened this time, too. It is likely that such unthinkable demonstration was allowed to be staged, based on the intent of the Abe administration. As explained in the last few lines of the article, such action is preparation for a war. Prime Minister

Abe still sides with the Bush-Nazi camp and has not known that Japan handlers and the elite in Japan, who he follows, have switched sides with the Nathaniel camp. Therefore, it appears that he manages the administration in accordance with the old plan, Armitage-Nye report. The elite have renounced a Sino-Japanese war. Since Abe has realized the advice of former Prime Minister Koizumi and steered in the direction of abandoning nuclear power generation, he seems unlikely to be expelled for now. However, if he should take action to rush headlong into a war out of personal motivations, he should be expelled before very long.

English translation of an excerpt from a Japanese article: Ryusaku Takana Journal: November 4, 2013 – 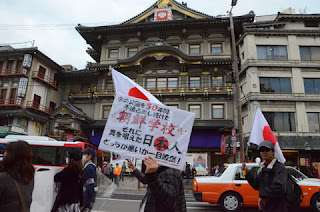 A storm of hate speech seen in front of Minami-za,
well-known Kabuki theater, too.
= Oct,4 in the afternoon at Higashiyama-ku Photograph: Ryusaku Tanaka =

Today in Kyoto crowded with foreign tourists, a hate demonstration with the aim of driving out different ethnic groups was staged. Racists, who were accused of attack on a Korean school, were dissatisfied with the judgment of Kyoto District Court – “Hate speech is illegal” – and made a protest against it.

Racists chose a route of demonstration which was absolutely gorgeous probably to vent their frustration against the lost case.

They started demonstration from Kyoto City Office, went southward along the Kawaramachi avenue, turned eastward from Shijoukawaramachi, crossed the bridge Shijou Oohashi, and reached Yasaka Shrine, where they turned back and went eastward along the Shijou Avenue again.

They walked along a route, which outshines Gion Festival, screaming an obscenity at Koreans living in Japan. It is nothing short of a mystery that the police allowed demonstrators to take this route. A small-sized demonstration consisting of about 30 participants was accompanied by as twice as many police officers. This is weird.

*The demonstration by Zaitokukai scared the children and teacher and defamed the school.

*They intend to appeal to the public for discrimination against Koreans residing in Japan, which is equal to racial discrimination stipulated by the United Nations International Convention of the Elimination of All Forms of Racial Discrimination.

*Zaitokukai is ordered to pay the school 12 million yen in compensation.

*Zaitokukai should not stage propaganda activities within a 200-meter radius of the Korean school. 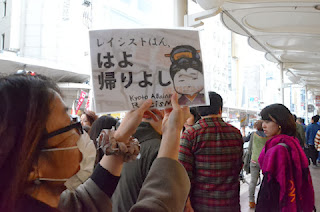 A protest sign is typical of Kyoto; A slogan on it sounds laid-back.
=At Kawaramachi Photo: Miyako Suwa

The Aba administration, which has a hardline stance toward China, South Korea and North Korea, enjoys high public approval ratings. On the other hand, many people, particularly so-called class B people are indifferent to political issues.

Many people have got to point out “the situation of the times resembles that before the war. If the whole nation gets to ostracize different ethnic groups, a war will be kicked off. We should not repeat the history.