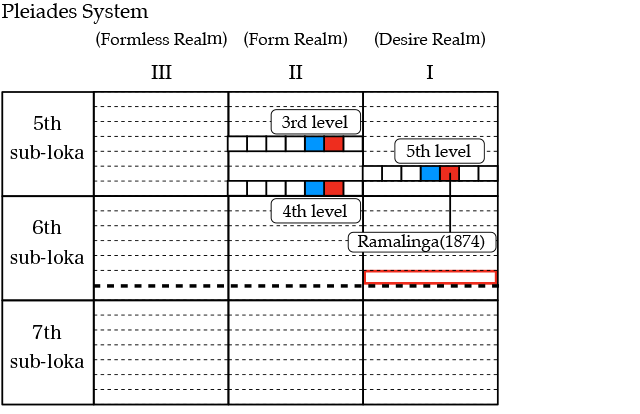 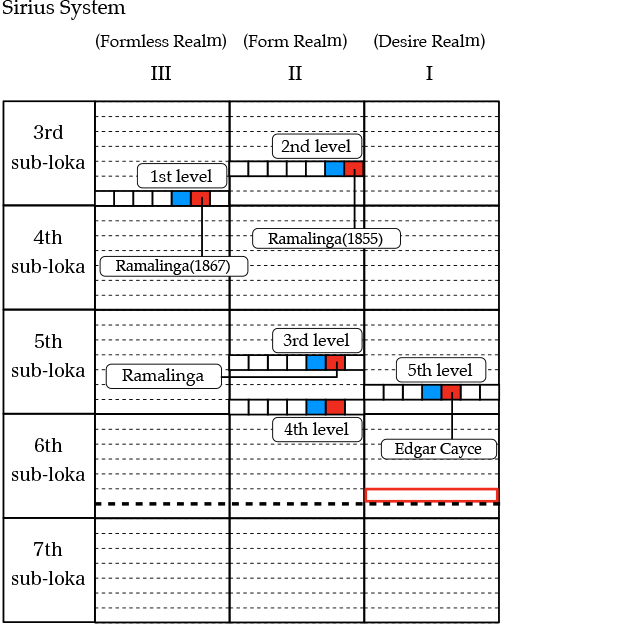 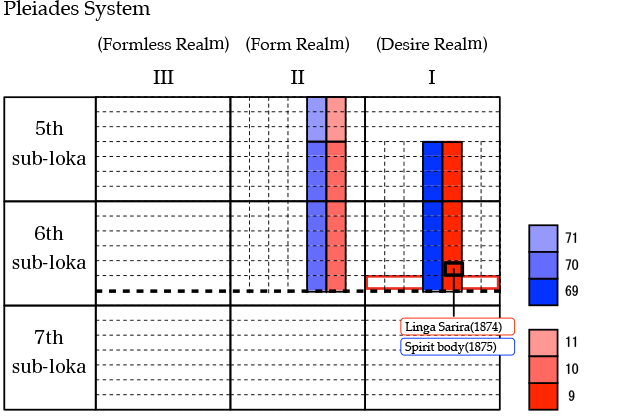 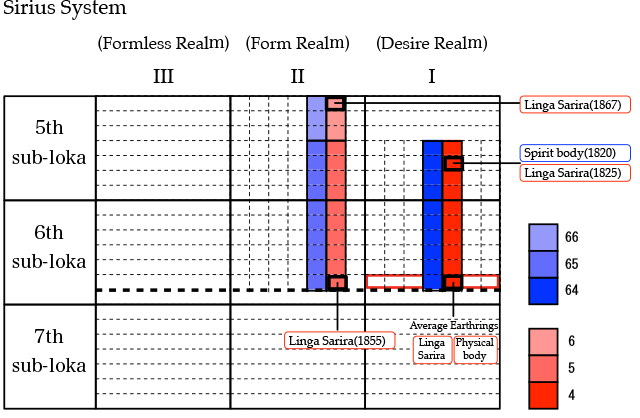 Change in the locations of Jiva and Linga Sarira/spirit body of Ramalinga Swamigal over a lifetime is shown below:

Ramalinga Swamigal was the being of Earthly Deity 3rd level of Sirius System (6th dimension) and a divine spirit who resided on Rakuhengeten of Desire realm.  We will see that his Linga Sarira resided on the same plane after reincarnation.  Unlike other saints, he had achieved a big spiritual progress three times over a lifetime.  Surprisingly, on the third time, he had attained liberation to the being of 2nd System Earthly Deity 5th level (9th dimension) with elevation in the location of Jiva and Linga Sarira from Sirius System to Pleiades System.  I have not known any other saint than Ramalinga who had achieved such spiritual progress.  In terms of spiritual achievement, he far more exceeds than well-known saints such as Gautama Siddhartha (Buddha), Krishna, Ramakrishna, Ramana Maharishi and Sathya Sai Baba.  I have never known a person who has liberated to the Pleiades System in history except Ramalinga.

Well, Ramalinga describes in his book “Thiruvarutpa” (Holy Book of Grace) each stage of physical transformations he experienced over a lifetime.  You will understand it in detail by reading the book “Babaji and the 18 Siddha Kriya Yoga Tradition” by Marshall Govindan; the “Love Body”*, a high-dimensional body, “Grace & Light Body,”* a higher-dimensional body, and the last stage body “Supreme Deity Body”* he describes are equivalent to “Linga Sarira in Senbushuu of Form realm,” “Linga Sarira in Daibonten” and “Linga Sarira in Shoushinshuu of Pleiades System” shown in the above table.  It is said that on January 30, 1874 “suddenly a purple flash shone in a room of Ramalinga.  When the door was opened later, the room was empty.  Ramalinga disappeared with no trace.”  If this is true, it is likely that Ramalinga attained “ascension within view of others” (Hakujitsushouten) according to Sendou.  It would be conceivable because he reportedly had no shadow.

*Translator’s Note: In Wikipedia, these are “the Perfect Body,” “the Grace Body” and “the Bliss Body” respectively.

Let’s refer to Edgar Cayce.  He is a well-known prophet and psychic.   He reportedly showed great ability in medical-related reading.  However, evaluations on his future prediction seemed to differ among people.
From spiritual viewpoint, he was rarely different from average earthling in the locations of Jiva and Linga Sarira/spirit body.  In other words, if a person who is good at sport, martial art or music gains global fame, will the location of Jiva or Linga Sarira change and rise?  Probably it has nothing to do with his ability.  Prediction, channeling or reading is one of talents and has nothing to do with spiritual advancement.  New Age advocates refuse to accept my view.  For example, a drug addict can see or hear what ordinary people can’t do.  Will it make him raise the location of his Jiva or Linga Sarira or achieve spiritual advancement?  They are unrelated to each other.  It is safe to say that those who place special value on channeling or reading unrelated to spiritual advancement are exposed to a dangerous situation in a sense.  In fact, this is demonstrated by the fact that 99 percent of such people are likely to be drawn into Darkness.  Novice seekers of spirituality had better keep away from that world.

It is true that Edgar Cayce was not so different from average earthling in spirituality, but as a matter of fact, he had a noteworthy virtue; he was really pure-hearted.

Light has been showered dozens of times with an onset of the reformation of heavenly world in 2007.  I mentioned in Urgent Information that a person who had been successful in meeting the standard on inner qualities would achieve spiritual progress due to light they received.  Edgar Cayce has rapidly achieved spiritual progress since the reformation of heavenly world and has now become the being of 12th System Earthly Deity 5th level (59th dimension).

He contrasts markedly with Ramalinga Swamigal who is still a divine spirit of 2nd System Earthly 5th level (9th dimension).  Although both of them are very excellent people, a big gap had been created between the two since the reformation of heavenly world.  This fact raise a question about what religion has really sought.  This outcome has made us think that love will enable a pure-hearted person to achieve spiritual progress and liberation swiftly, though seemingly slowly, without making any special efforts to seek them.”