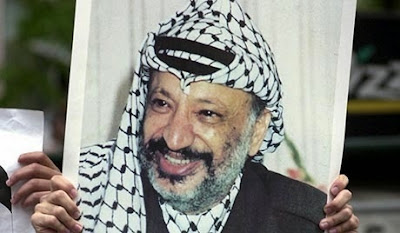 You can tell that Arafat is a true Novel prize winner but Obama is not.
It is right in thinking that as Kissinger said, the nation of Israel is almost certain to disappear within a decade, though the time has not been decided.

English translation of a Japanese version of The Voice of Russia – October 13, 2013 –

A British medical journal the “Lancet” has reported that information on Arafat’s poisoning is true.

According to the journal, radiological tests carried out in Switzerland found high level of radioactive element polonium 210 in Arafat’s saliva, urine and blood.

This has supported the possibility of Arafat’s poisoning with poison.

In November 2012, his remains were exhumed and autopsy was carried out anew. This is because there were traces of polonium in his personal belongings.

Autopsy was carried out at the request of Arafat’s wife Suha.

VOR
Posted by Shanti Phula at 2:00 AM