“Let’s look at specific examples of the relationship between dimension & plane and body this time.  I’d like to explain about human bodies.  According to traditional teaching, the body is composed of following five different bodies.

Unless a specific body is intentionally moved to another plane by separation, Linga sarira and causal body or spirit body and causal body are overlapped in the same plane.

Understanding such a basic concept mentioned above, let’s see which planes the Linga sarira and spirit body (causal body is almost always overlapped with these) of two well-known Indian saints are located over a lifetime.

Checking where the Jiva (individual soul with ego) of the two are located, Jiva of Ramana Maharishi and that of Ramakrishna is located in Earthly Deity 3rd level and Earthly Deity 4th level, respectively.
Location of the Jiva (individual soul with ego) is fixed, depending on the level it belongs to.  The location will not change over a lifetime unless it is accompanied by so great spiritual experience.
In spite of attainment of Nirvikalpa Samadhi, the location of Jiva did not change. 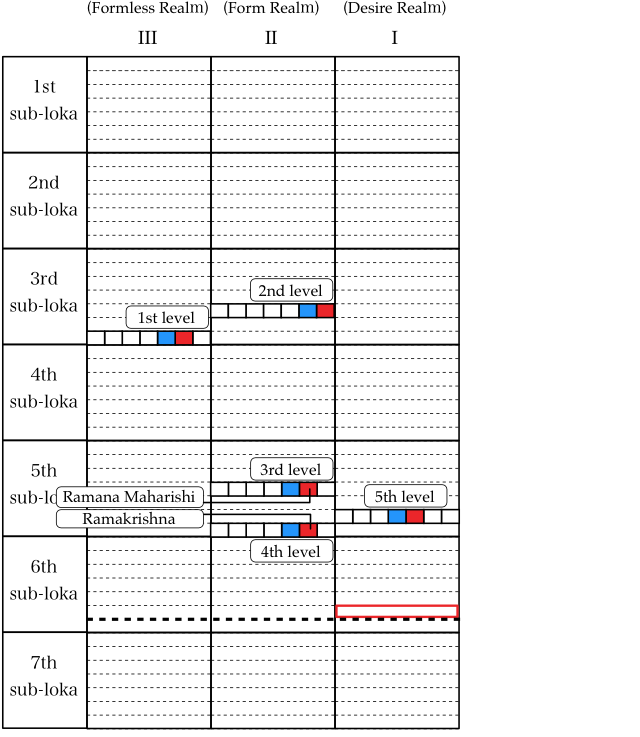 Checking whether the two are the Divines, humans or Demons, both of them are found to be Earthly deities (divine spirits) and they are true Avatars (incarnations of deities).  Even if a being is reincarnate from a high level of plane, we cannot determine whether it is the Divine or the Demon, though the level it belongs to is known, only by the location of its Jiva.  If its Monad (blue pearl) is located not in the Sirius System but in the Animal System, Demon is reincarnated in some cases.

We can discriminate between deity and human by the difference in elements consisting of body.  Please refer to the visions Serena-san saw on September 21, 2012.

Hotsuma deities have not only above-mentioned bodies but also three bodies: higher etheric body, higher astral body and higher mental body.  Basically, they have the body which is composed of a total of eight bodies.  Detailed explanation about it is omitted here.

Look at the location of Linga sarira and spirit body of Rama Krishna over a lifetime, first. 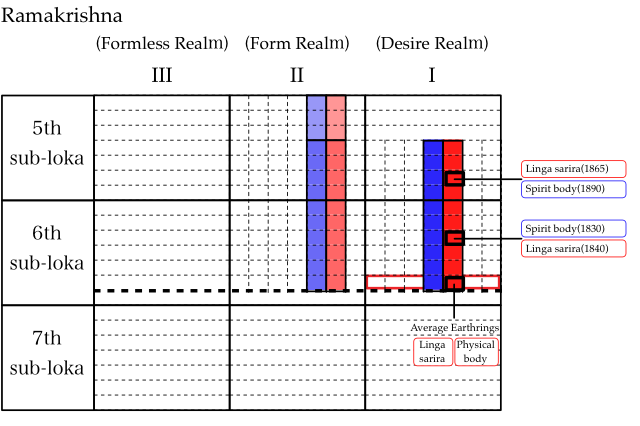 Ramakrishna was born on February 18, 1836.  As shown in the above table, his spirit body was in the 4.3th dimension of Kurushuu (5th sub-sub-subloka) before he was born with the body.  This table shows the basic location of his spirit body on January 1, 1830 I examined.  You will find that his Linga sarira was in the same plane, Kurushuu, as his spirit body, even after having the body after reincarnation.  It is said that he finally attained Nirvikalpa samadhi (the highest transcendent state of consciousness) under the guidance of his guru, Totapuri, under whom he had started spiritual practices.  Then examining where his spirit body was basically located as of 1865, it is in the 4.7th dimension of Toshitaten.  He died on August 16, 1886.  Examining the location of his spirit body in 1890, it is in the same location, 4.7th dimension of Toshitaten.  Spiritual practice does not simply raise the basic location of Linga sarira of a practitioner.  Achievement of the highest transcendent state of consciousness such as Nirvikalpa Samadhi liberates him and almost automatically raises the plane where his Linga sarira is located.  You will understand that Ramakrishna was reincarnated as spirit body after death in the location of Linga sarira he attained. 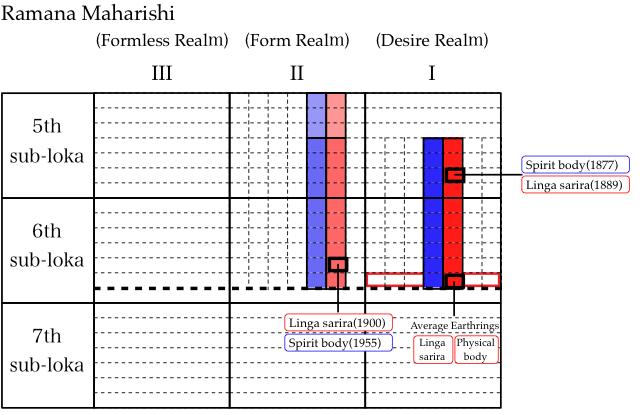